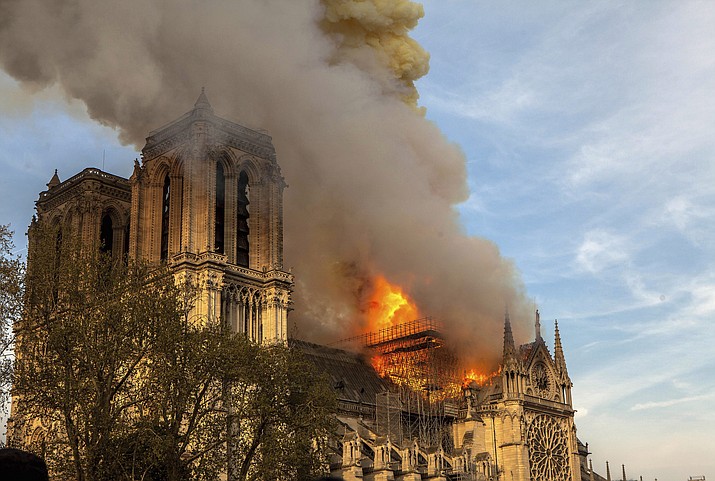 Firefighters declared success April 16 after a more than 12-hour battle to extinguish an inferno engulfing Paris' iconic Notre Dame cathedral that claimed its spire and roof, but spared its bell towers. Members of Indian Country spoke openly about their feelings on the burning of the cathedral and the desecration of sacred Native sites. (AP Photo/Vanessa Pena)

FLAGSTAFF, Ariz. — Native American Indian Country’s reaction is sharp when it comes to the destruction of sacred sites; all sacred sites.

While Indigenous sacred sites are being exploited, another place of prayer that is sacred to Western culture just burnt across the Atlantic Ocean.

The world was devastated and watched the live flames at the Notre Dame Cathedral during the Catholic Church’s Holy Week. Flames engulfed the 800-year-old structure for approximately 12 hours.

Mainstream news tweaked their headlines along the feelings of grief, disbelief, sadness, and “decades of history.” NPR’s Andrew Lapin wrote, “This felt like watching a symphony burn down.”

The Associated Press headlined one story as “Notre Dame hailed as a monument to the ‘best of civilization.’”

“It’s not just one relic, not one piece of glass — it’s the totality,” she said. “It’s the very soul of Paris, but it’s not just for French people. For all humanity, it’s one of the great monuments to the best of civilization.”

The Notre Dame Cathedral took 182 years to build, started in 1163 and finished in 1345. King Louis VII sat on the throne.

The landmark is listed as a World Heritage Site by the United Nations Educational, Scientific and Cultural Organization. A fact also noted by CBS News.

But that’s not the only World Heritage Site. So is Chaco Canyon. And unlike Notre Dame the unfolding environmental disaster is a designed, planned and willful exploitation of a sacred site.

Chaco Canyon, formerly known as Chaco Culture National Historical Park, was the hub for many Indigenous cultures in the modern-day Americas.

From archaeological evidence, this civilization was built in 850 and completed in 1150. However, the people who lived here suddenly left sometime around 1100.

But instead of universal support for this heritage site, the Trump administration is looking for oil and gas development near the national park. The Bureau of Land Management intends to move forward with oil leases within a buffer zone that was established by former president Barack Obama. That buffer zone held off any leasing to oil and gas companies.

Local tribes, tribal citizens and allies have been fighting against the oil and gas companies and those that want to extract resources near the national monument.

Navajo citizen Kendra Pinto, who lives on one of the parcels that was put up to lease, was not informed of the potential hazards of oil and gas development.

“We can smell the pollution, see the flares, and hear the methane being released every day. We cannot continue to adopt a ‘wait and see’ approach to methane regulations,” she said.

Craig O’Neill, senior business development manager of Optical Gas Imaging, said they are “advancing the technology to reduce methane emissions to new levels” so they can save lives.

The destruction of sacred sites

Indian Country immediately drew parallels between the Notre Dame Cathedral burning and the destruction of many sacred Indigenous sites.

The Notre Dame Cathedral was being renovated when the flames caught. The world watched the roof collapse, including the iconic spiral. The two rectangular towers and main structure of the building were preserved.

Local officials are investigating the cause of the fire, which they suspect are linked to the renovations.

The world quickly turned to social media to mourn the loss of the historical landmark. Some even posting images from the Disney film “The Hunchback of Notre Dame.”

“The concern and dismay is being felt by many around the world. Now imagine that the damage to this historic and religious site was caused by a pipeline running through it, by fracking, or due to development,” Douma wrote “This shock and dismay is the type of feeling Indigenous people feel when our lands and sacred sites are damaged and threatened.”

“The mountain is a church.

The canyon is a church.

The ocean is a church.

The river is a church.

Mother Earth is a church.”

A follower of the account agreed and said, “The visceral reaction to seeing Mother Earth gutted to lay pipeline was real pain. I feel nothing when I see this church burning.”

Another commented, “We are more concerned about structures than our burial grounds! #whataboutusindigenous”

Fashion designer Sho Sho Esquiro posted a photo of her and model in front of the cathedral in February. One model wore a jacket that stated “No Apology Necessary.” The designer was part of the Indigenous Fashion Week on the Eiffel Tower.

A few were sympathetic.

Business owner Arianna Lauren of Quwutsunmade posted her “unsolicited opinion” about the cathedral burning down.

“I think it’s super wack Natives are taking this as a time to jab at the church. Yes it burnt down. Yes it is Catholic. But to gloat in the face of something tragic is very low. It’s also sad to watch something of such beauty (aesthetically) perish. Idk ya’ll, maybe let’s not make this a Native issue today,” she wrote. “I mean, racist Catholics suck but this building doesn’t represent all racists. Let’s just put this energy into uplifting our communities, bridging gaps and teaching those willing to learn.”

Around the world there are many places considered sacred to Indigenous people that are being developed, including Bears Ears National Monument in Utah, Arizona’s San Francisco Peaks, and lakes where wild rice grows in Minnesota.

Several on social media said unlike buildings that can be rebuilt, ancestral and sacred sites on land cannot.

Rep. Deb Haaland, D-New Mexico, said in the recent hearing that destroying structures is easier than trying to preserve them.

More pledge to donate to the reconstruction of the Catholic Church, including Apple.

“It’s important that we protect Chaco Canyon, both because it is a sacred place that should be valued the same way we value other sacred places, but also because public lands must be protected,” she said last week in a phone conference. “This place is the ancestral homeland of my people and is a living landscape. It’s a place where New Mexico families and people from all over the world come to make memories.”