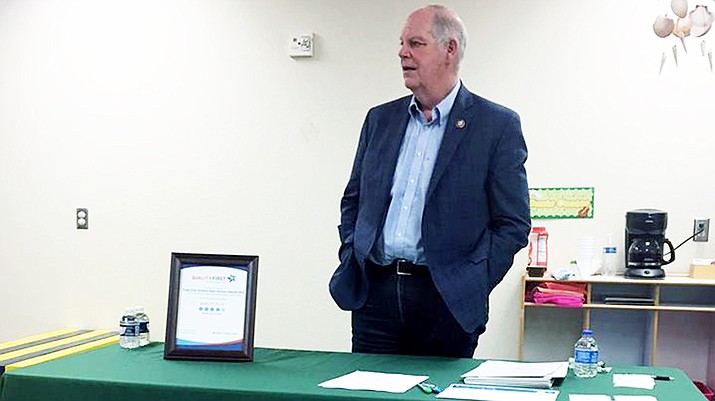 TUBA CITY, Ariz. — The four star rating of Tuba City High School’s Child Development Learning Center attracted interest from U.S. Rep. Tom O’Halleran (D-AZ), who personally visited the school March 19 to learn more about what the program does and who they partner with to provide a quality program for children 3 to 5 years of age.

Memarie Tsosie, the regional director of the Navajo Nation’s First Things First program, who organized the visit, said they have partnered with Tuba City High School for several years and they help to improve the overall quality of services through their program called Quality First. Quality First is a program administered by First Things First and it is simply a quality rating and improvement system that works closely with the child care center staff at the high school to reach quality status. Quality First also incorporates and involves the participating CTE high school students.

Tsosie said the Tuba City child care center is one of the best within their region and they are ranked four out of five stars, meaning that the Tuba City site is ranked in their upper tier of centers. Only four programs out of the 23 programs on the Navajo Nation have four stars.

“Four stars are the highest that we have on the Navajo Nation,” she said. “So we wanted to highlight that for the congressman.”

Tsosie explained O’Halleran’s visit to Tuba City was the result of a presentation her program provided to his office a month ago in Washington, D.C. They provided him with an overview of their program and it caught his attention, and so they helped to arrange the visit that coincided with a scheduled town hall meeting in Tuba City the same day.

Jack Jackson Jr., a congressional staffer with O’Halleran’s office, said the congressman was really excited to hear about all the great things that are happening on tribal lands and in Tuba City.

“He felt happy coming out of the meeting,” Jackson said.

Jackson explained they heard great things and the most exciting for the congressman was hearing from the students. He said some of the students were part of First Things First, and went on to high school, then to college and a couple of them returned back to Tuba City and are now working for First Things First. 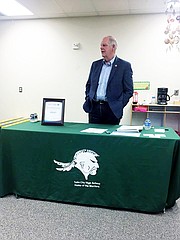 O’Halleran was extremely interested to see how the school’s CTE program worked with the child care center and First Things First.

Woody Begay, CTE director at Tuba City High School, said he was thankful for the congressman’s visit to their child care center and he appreciates the partnership they have with First Things First. He explained they have 13 students currently enrolled in the program that assist the pre-K teacher and a teacher assistant.

“The pre-K teacher and the teacher assistant do the majority of the teaching to the children and our high school CTE students help devise lesson plans and help deliver the lesson plans to the kids,” he said.

Begay commended the work of Catrina Herbert, lead teacher at the child care center, and Maria Goatcher, instructor and program coordinator, for their work in making their child care center top notch.

Tsosie is proud of the Tuba City site.

“They [Tuba City] do a really good job and Ms. Herbert is really working hard with the students there and the CTE program,” she said. “All the skills that they’re learning, in terms of the interactions with teacher/child interactions are going to be very beneficial for the kids in the preschool and child care center.”

Tsosie said the center is building those foundational skills that will help the children in the child care center, so they can be ready for school when they get to kindergarten.

“They’re doing a really good job with that, it’s evident in their four star quality rating,” she added.

Jackson said “the congressman enjoyed his visit to Tuba City High School.” He enjoyed speaking with the child care staff, with Woody Begay and Maria Goatcher at the high school.

“During appropriations, he tries to address those types of issues during the appropriations process,” said Jackson. “That’s currently happening now. Overall, he is a supporter of quality education.”

First Things First operates on the premise that 90 percent of a child’s brain develops before kindergarten and so they want to provide as many resources as possible to help in early childhood development. Many of their efforts are accomplished through partnerships with families, communities and schools to help prepare children for kindergarten and beyond.

First Things First has 23 child care centers across the Navajo Nation and four sites in western Navajo, one in Tuba City, one in Leupp and two sites in Kayenta.