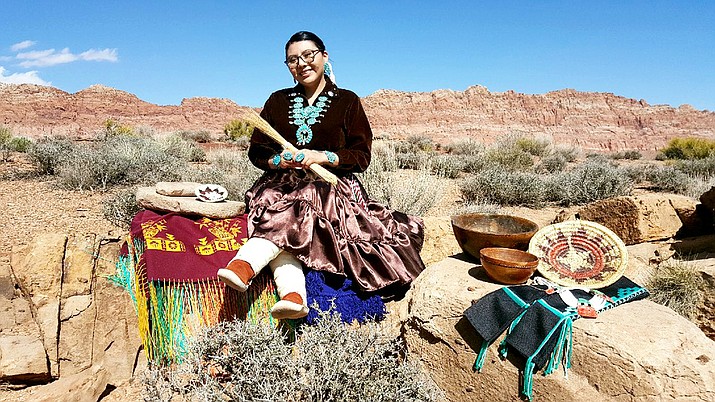 Sydney Haley Tsinigine, 21, will be one of 18 contestants vying for the coveted title of Miss Indian World April 23-27 at the Gathering of Nations event in Albuquerque, New Mexico. (Submitted photo)

FLAGSTAFF, Ariz. — Sydney Haley Tsinigine will be one of 18 contestants vying for the coveted title of Miss Indian World April 23-27 at the Gathering of Nations event in Albuquerque, New Mexico. 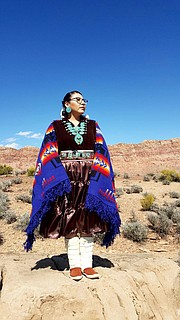 Sydney Haley Tsinigine, 21, will be one of 18 contestants vying for the coveted title of Miss Indian World April 23-27 at the Gathering of Nations event in Albuquerque, New Mexico. (Submitted photo)

Tsinigine, 21, is a Navajo tribal member from Bodaway-Gap, Arizona, a community just 25 miles northwest of Tuba City on Highway 89. She is running for the title because she wants to help inspire and empower Native American people and communities, especially the youth.

Tsinigine realizes there are a multitude of social ills negatively impacting Indian Country but she said her platform will include as many issues as possible. She said there is not just one topic that has inspired her to run for the title. Tsinigine will advocate for drug and alcohol prevention, teen pregnancy prevention, domestic violence, murdered and missing indigenous women and human trafficking awareness. She also said youth empowerment will be one of her main issues.

“Abuse is an issue on most Native American reservations, [these] are [all] topics that need to be addressed by all communities and their leaders,” Tsinigine said.

She wants to encourage the youth and young adults to band together to find solutions to problems in tribal communities instead of relying on other people or the government to fix the problems.

“Healing is the answer that needs to start now,” Tsinigine said.

She also said cultural preservation will be paramount in her advocacy and she plans to share positive and encouraging messages with as many Native American youth as possible.

“No matter what tribe, culture or heritage, there is beauty and sacredness to who we are,” she added.

To Tsinigine, Miss Indian World is a very empowering and inspiring individual that has the power to deliver significant messages of hope.

“[Miss Indian World] is a young woman that represents the whole entire world, she sends a message out that is very positive and that is very pure,” she said.

Tsinigine grew up in Western Navajo and her early years were spent living in Bodaway-Gap before she moved to Tuba City, where she went to Moenkopi Day School as a child. She attended Tuba City Junior High School and Tuba City High School where she graduated. After high school she attended Southern Utah University in Cedar City, Utah, for two years and then transferred to the College of Southern Nevada in Las Vegas where she is currently studying Educational Administration.

Tsinigine hopes to become a school principal or assistant principal and to also counsel students or mentor students at the college-level.

Her inspiration is her mother, Loretta, and her aunts; she said they all participated in beauty pageants when they were younger.

Tsinigine said as Miss Native Southern Utah University, she had a unique opportunity to engage with many youth in Native American communities and she informed them about issues impacting their people and their communities, including the importance of reviving their native language and culture. She said the method of visiting with people, going to schools and motivating the youth resonated.

Loretta Seweingyawma, Tsinigine’s mother, said they are extremely proud of their daughter.

“Sydney’s father and I are both very proud of Sydney. She comes from a long line of rug weavers, silversmiths, jewelry makers, tribal advocates, politicians and a family of strong Navajo/Hopi heritage,” she said. “Sydney exemplifies humility, determination and is very thoughtful; her love for children and youth is phenomenal.”

As the pageant is inching closer, Tsinigine said she is feeling very excited and she is honored to be able to represent the Navajo/Diné Nation. She said her mother plans to attend and hopes the rest of her family comes to support her as well.

The competition begins April 23 and she will be participating in several competitions including public speaking, traditional talent and a dance competition. The coronation is scheduled April 27 at the Gathering of Nations Pow-wow.

The Miss Indian World pageant occurs annually during the Gathering of Nations Pow-wow in Albuquerque. The four-day pageant attracts young Native American women from tribes across the country and it provides young women the opportunity to showcase their respective tribes and cultures. Pageant competitions include public speaking, interview ability, essay presentation, dance and a traditional talent.

Contestants must be Native American, single with no children and have never been married. The pageant will be held at the Albuquerque Convention Center at 401 Second Street NW in downtown Albuquerque.