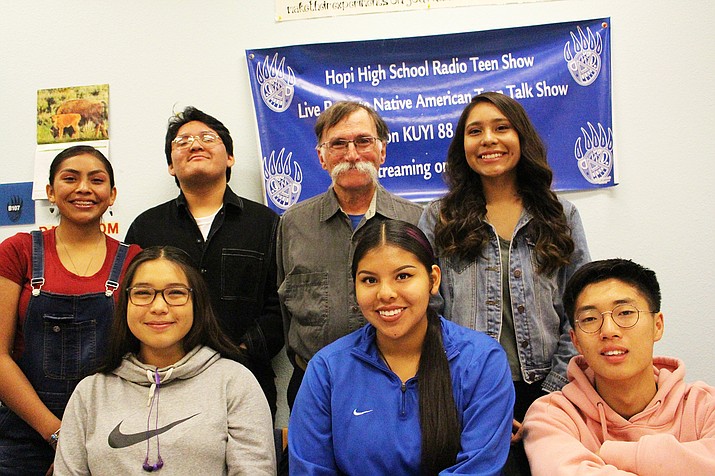 “I am honored to be nominated for this prestigious award. It just shows the success of the program and that my students work hard and have been marvelous at learning this craft,” Bindell said.

“I am looking forward to my students competing at the JEA conference again this year in late April in Anaheim,” Bindell said.

Bindell has been teaching media at Hopi High for 22 years, starting with newspaper and adding the radio program in 1999 and the video program five years ago.

“I am blessed that I am able to teach all three forms of media,” he said.

Bindell and his students have been active participants in the AIPA workshops and conferences for years. He has served on the AIPA board for several years.

Bindell and his students have taught sessions at the AIPA workshops, usually “Youth Radio Rocks My World,” which informs youth about the opportunities that radio has to offer them.

Bindell’s Hopi High radio program is the only live remote Native American teen talk show in the nation. The show is broadcast over KUYI Hopi radio, which is the largest wattage public Native American radio station in the continental 48 states with the show heard on the Hopi and Navajo reservations, Flagstaff, Holbrook and Winslow as well as streaming online. Additionally, the show gets online hits from all over the world.

“We have had a wonderful partnership with KUYI and I thank all of the leaders there for help with the students,” Bindell said.

“I believe I am in a special place doing special work,” he said.

Bindell was a working journalist for 20 years before switching to teaching and continues to freelance for the Navajo-Hopi Observer and Gallup Independent. He earned his BA in communications from William Paterson College and his MA in Political Science from Drew University.

Bindell hopes to serve as a mentor for inexperienced journalism teachers.