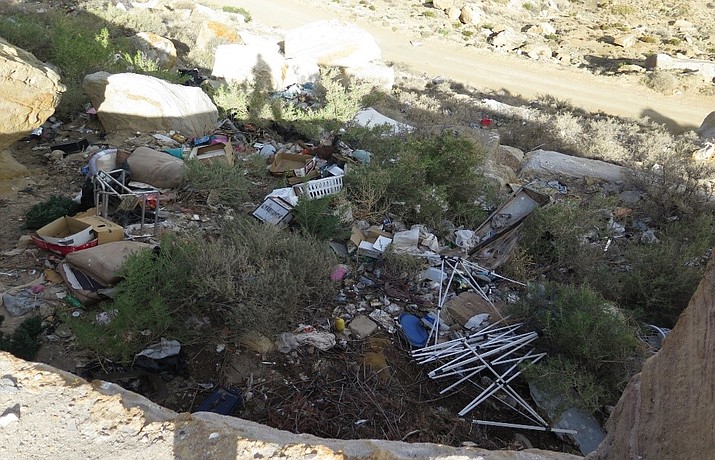 During last year’s First Mesa Annual Clean-up event residents from Polacca, Arizona, picked up and hauled away over 10 tons of trash that was cleared from the sides and top of the mesa and around their homes.

The cleaning on the mesa top went fairly quickly, but when concentrated efforts moved to the sides of the mesa, clean-up efforts almost came to a complete standstill directly behind Tewa Village. Years of illegal dumping over the sides revealed layers of trash almost three feet deep in some areas.

A total of 223 volunteers helped at last year’s cleanup. The mesa top crew of 90 volunteers was led by Dale Sinquah. The separator crew of 20 people were led by Jack and Georgie Pongyesva of RezCycling. The serving crew was led by Janice Nuvayestewa and first aid was provided by Kevin Dennis and Humeysie Sockyma.

Marshall Masayesva Cliff Hanger, crew lead, led over 80 volunteers. His team leads, Truman Navakuku and Hali Lomayesva, had training that enhanced their leadership skills in properly using equipment, safety and communication. This crew contributed over 100 hours to this one day event. The highlight was how efficient the zipline worked in transferring trash down the mesa. This was especially effective in keeping community members safe as trash was layered so deep one community member mentioned they had stayed in one place for two hours and never reached the Earth — it was toward the end of the day and people were beginning to head back up to the mesa top.

All native ancestors were traditionally recyclers. They used natural materials from the land and animals. Only when something was no longer useful was it finally disposed of. The natural materials used would then disintegrate back into the Earth; causing no harm to the water or environment.

In 2019, we see that this is no longer the case. Manmade plastic and metal materials literally hold up the mesas; not only at First Mesa, but at Second Mesa and Third Mesa as well. Where Hopi were once revered for being the caretakers of the Earth, in this time and age, we can no longer be looked up to in such a manner. By taking an honest look at the destruction that we have caused to our land all one has to do is simply stand in the midst of all the trash and illegal dump sites, which are found all over the Hopi Reservation and realize we are no longer upholding the covenant we made with Masau’ — to care for our Earth in the manner that is Hopi.

Back in 2015, the Hopi and Navajo Nation combined produced an estimated 300 million pounds of trash. Imagine what that looks like today, four years later. There has not been any big movement made on the Hopi Reservation to clean up what should have never been dumped illegally. Although there is a fine for unlawful dumping it is not being effectively enforced by BIA (Bureau of Indian Affairs) police and the Hopi Rangers. Harsher penalties are needed for illegal dumping along with educational presentations in the Hopi/Tewa communities on the Illegal Dumping Code and recycling efforts.

Data from the 2018 clean-up estimated that over 233 volunteers came to help April 21, 2018. Over 60 people donated food to feed volunteers. First Mesa residents collected over 10 tons of trash and some of this was recycled. This project took over six months of planning to the day of the event.

Planning continues to restore the sides of the mesa and educate our community about recycling and illegal dumping. The budget to complete the one-day event rounded out to about $120,000. All items were donated by community members, all First Mesa Village administrations, tribal programs —Department of Public Safety and Emergency Services, Navajo County Board of Supervisors; nonprofits, Ancestral Lands, Hopi and businesses, Hopi Telecommunications, APS, and Rezcycling.

This year’s First Mesa Annual Earth Day Clean-up will be held April 20 and April 21 in Polacca, Arizona. We need volunteers for the two-day event which will begin on Saturday at 8:30 a.m.-4:00 p.m. On this day, the concentrated effort will be on the sides of the mesa and lunch will be provided. On Sunday, the mesa top cleaning will begin at 1 p.m.-4 p.m. There will be no lunch provided on this half day.

Easter Challenge Prizes will be given out on this day as well. There will also be a Volunteer Orientation April 19 from 5:30 p.m.-7:30 p.m. at Ponsi Hall.

A big thank you to our partners and sponsors: The Village of Tewa, Sichomovi, and First Mesa Consolidated Villages, RezCycling, Ancestral Lands Hopi, Navajo County, and Hopi Telecommunications.

Elderly coordinator for the Village of Tewa