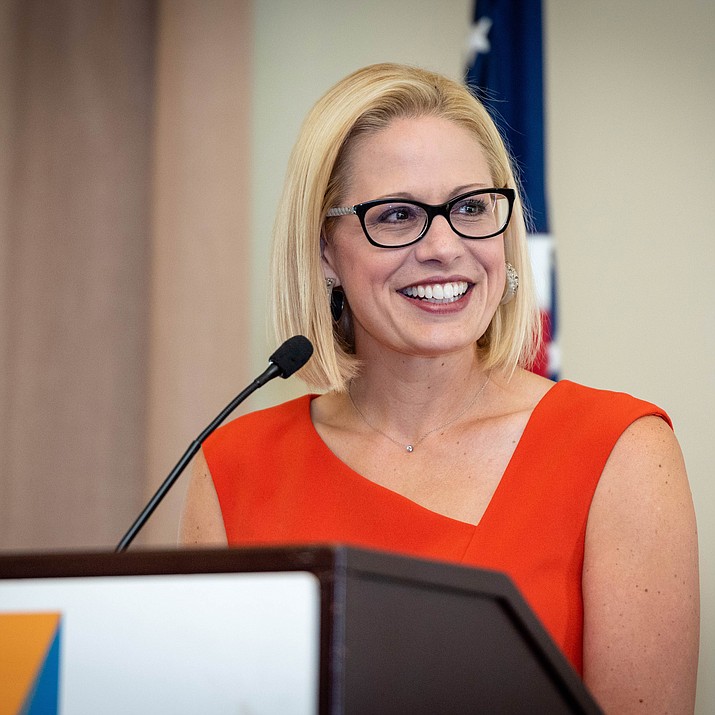 Arizona Senator Kyrsten Sinema said access to primary health care in rural communities, including many reservation towns is a challenge that she hopes to address with her community health investment bill. (Photo/Kyrsten Sinema D-Arizona)

Sinema said she has been working on rural healthcare, in particular. During the recent government shutdown, there was a big impact on Indian Health Services. Sinema said she reached out to the secretary of Health and Human Services (HHS).

“There’s a particular need on our American Indian reservations."

“[I said], ‘Look this is very concerning. This is having an impact on IHS.’ Now that that’s done, I’m still concerned we haven’t filled the vacancy for permanent director for IHS,” she said. “That position needs to be filled quickly with someone who understands tribal sovereignty issues, who understands independence and who listens to and acts on the needs of tribal communities.”

Sinema said she is working hard to make sure that HHS is working to fill the position and that the department will get feedback from tribal communities before it nominates someone.

Sinema co-sponsored a bill called the Mental Health Improvement Act. The bill would allow more mental health professionals to be covered under Medicare so seniors living in rural Arizona can have greater access to healthcare services.

“That applies to all folks in rural Arizona, but as we know, there’s a particular need on our American Indian reservations.”

Right now, Sinema said Medicare only covers psychiatrists and psychologists for mental health but in rural areas, there aren’t enough. The bill would allow people like licensed mental health counselors and marriage and family therapists to qualify to provide these services and receive reimbursement from Medicare.

Another issue is the shortages around primary care. Rural communities have a more difficult time getting access to primary care physicians. Sinema co-sponsored a community health investment bill, which renews funding for community health centers and National Health Service Corps.

“That helps bring more primary care doctors to rural areas,” Sinema said. “For people living in rural communities, sometimes the community health centers are the only access to healthcare they can get.”

Sinema also said she has been working on wildfire issues.

“Because we have had such a wet winter, we expect we’re going to have a very, very difficult fire season,” she said.

Sinema said she has reached out to the Forest Service and the Bureau of Reclamation to make sure they are working on reducing the threat of wildfire.

“We did just get a funding fix for wildfire prevention, which is exciting,” Sinema said. “We got over two billion dollars in funding for preventing and fighting forest fires. That’s a really exciting measure that’s going to help ensure that our Forest Service can do what it needs to prevent these forest fires.”

While she was in the House of Representatives, Sinema also passed a provision that makes air tankers available to fight wildfires. She said in Morana, Arizona, there is a tanker called the Super Tanker, which is an old converted plane that can dump more water and more fire retardant than any other plane in the country.

“For a long time, the Forest Service was just keeping it grounded in Morana and wouldn’t let it out to fight fires, even if a local fire service was willing to contract and pay for it,” Sinema said. “So we fought that battle for a long time and won and now the super tanker can be used for these massive fires. Hopefully, we won’t have anything like that this summer but if we were to have a massive fire like we did in Yarnell several years ago, this is the kind of tool we can use to put out these fires before they harm people and their homes.”

One of Sinema’s areas of interest has been Impact Aid funding, which is designed to assist local school districts that have lost property tax revenue because of federal tax-exempt property, increased spending and enrollment of federal connected children, including those living on reservations.

“Arizona actually gets more Impact Aid funding than any state in the country and that’s something I’ve been really working hard to increase,” Sinema said. “Just last year, we got an $80 million increase in Impact Aid and this year I’m working to strengthen that program to make sure Arizona continues to get…our fair share, which means we should get the most in the country.”

Sinema said most of Arizona’s rural school districts receive Impact Aid and that includes a long list in northern Arizona.

Sinema also said there is a program called SRS (Six Year Rural Schools program), which needs to be reauthorized.

“There has been a decrease in timber funding because the way we manage our federal lands has changed in recent years,” Sinema said.

Because of that, local communities see less revenue come in from timber. The SRS program makes up for that lack of funding.

“We’re fighting on that issue in the appropriations process,” Sinema said. “I feel pretty good about where we are.”

Sinema made clear that proposed budget cuts from the Trump administration do not make a difference to her work.

Sinema said she will continue to fight for increases to Impact Aid and points out that northern Arizona children receive a lot of the funding, especially those on reservations.

“Disproportionately, large amounts go to them because they meet the qualifications for receiving Impact Aid, more so than even some of our other schools.. like Coconino County Accommodation School District, Cedar, Blue Ridge, they all receive Impact Aid, but our reservation schools do receive a very large portion of it,” Sinema said.