Flagstaff graduate speaks out about Native inclusion at Georgetown University 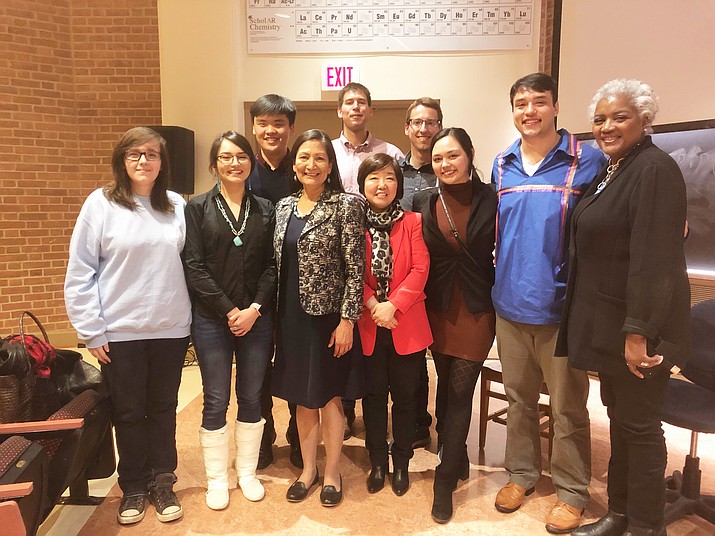 She, along with other Native American Student Council members at the university, have created a petition seeking to address those issues.

Zuch is a registered Navajo and part Tewa/Hopi, but not enough to be registered. She graduated from Flagstaff High School and received a scholarship to Georgetown University where she is now a junior, majoring in human science, on a pre-med track.

She has joined the Native American Student Council (NASC), which only has four members at Georgetown currently. NASC has been trying to push for more representation and visibility on campus.

“The past couple semesters we’ve felt like we’ve been kinda pushed off from the university more times than we can count,” she said. “It is a conglomerate of things that have led to us forming a petition.”

Even finding out the number of Native students at the University has been hard, Zuch said.

“I’ve heard people tell me it’s only twelve students,” she said. “And then I’ve heard fifity students. Currently in NASC we only have four self-identifying Native students, including myself.”

Zuch had been prepared for culture shock, going to the East Coast from the Southwest and Flagstaff. But it has been even more than she imagined.

“Half of the students at Flagstaff High School were minorities… it was very eclectic, I would say about a quarter of the students were Native,” Zuch said. “Coming from a population where a quarter Native American students to even like just the four of us, it was an interesting transition.”

Zuch said it was difficult to come to terms with feeling alone — there was no community to share her identity with — and given the lack of Native students, she said it is really hard to form that community.

The other students in NASC are the beginning of that community for her — they have similar ideas, opinions and experiences, which they believe is important.

“Part of the idea with the petition is calling for a better recruitment effort from the university to include more indigenous students into future years and really we want to see a bolstered indigenous community on campus,” Zuch said.

NASC said it has met with Georgetown admissions officials with their concerns about these issues but they essentially have been told the university tries not to show preference toward any group of people or demographic.

“They don’t actively recruit people based on those characteristics,” Zuch said. “It’s a pretty clear problem that not enough Native students are pursuing higher education in general. This is something that personally I’ve communicated and I think it’s problematic that the university is facilitating this crisis of Native students not being able to attain and pursue higher education by not actively seeking them out, recruiting or supporting them in the admissions process.” Zuch said her frame of reference is Northern Arizona University in Flagstaff, Arizona, where she was offered a full-ride scholarship.

“NAU is of course phenomenal in what they have to offer me as Native American,” Zuch said. “Even Stanford had heritage clubs on campus.”

Zuch said she and the other students in NASC did not see anything similar when they applied to Georgetown.

“I suppose that anyone else on campus could say the same thing,” she said. “But, again, given the circumstances, it just doesn’t sit well with me.”

Zuch said the process of meeting with faculty, staff and university officials has been a pretty tedious and arduous process for the students because nothing ever really changes in those meetings.

“We never really walked out with a formulated plan,” Zuch said. “All of these meetings resulted in us being referred to someone else or if someone supported us 100 percent, they still couldn’t do anything in their area. I just think people aren’t aware of the needs that some of the Native students need on campus especially.”

Zuch points to even a support group that helps students deal with culture shock.

“I don’t think any faculty or anybody on campus really understands that,” she said. “That’s like a really real phenomenon that occurs.”

The petition also calls for an increase in indigenous faculty members — there are currently two Native faculty on campus. Zuch has only met one.

“I think that’s really problematic because the narration between Native people has historically been an invisible one,” she said. “It makes no sense to me that there is no consideration for tribal affairs, the health problems on the reservation. I just think that there’s a lot of knowledge on the reservation that goes overlooked in this university.”

The petition calls for a program coordinator — someone dedicated to the affairs of Native students, someone who is familiar, who can help with transition and support with appreciation of Native cultures.

“We have nobody here who will do that for us,” Zuch said, adding that Georgetown really prides itself on being a pluralistic university. Historically it is a Jesuit university, but Zuch said it supports all sorts of religious groups.

“I have friends who are Jewish and Hindi and I can see those organizations on campus and I can see how much attention and support that they get, but when it comes to indigenous, cultural appreciation and spiritualism, it’s pretty much just left to the four of us to be that voice and to be that representative for nearly all indigenous people on campus.”

Zuch realized that she would not find the same experience at Georgetown that she knew in Flagstaff, but she admitted that she was surprised at the real lack of any understanding of basic things about Native culture.

“I was writing a piece and I referred to the term powwow,” she said. “And somebody made a note about it saying, ‘What is this? You need to give us context for what this is, I don’t know what this is.’ I was like, wow. It’s a commonly used analogy when you’re referring to indigenous culture. I was like, oh my goodness, it’s worse than I thought. It was a really weird experience for me.”

“We want to have more Native Americans come speak on campus because we know that narrative is such a powerful thing,” Zuch said. “Anything at this point helps.”

To put a fine point on how it helps, on March 23, Rep. Deb Haaland (D-N.M.) came to Georgetown University to speak. She was invited by the Women and Gender Studies program. About 250 students attended the event.

Zuch and the other members of NASC got to listen to her speak and to meet her.

“It was an incredible event,” Zuch said. “Speaking from the perspective of a Native woman and then being born in Arizona and coming from New Mexico, working her way up to being a representative, it was just incredible experience. We actually got her to sign our petition, as well. We’re hoping that the university will see, with her addition, what a problem it is.”

During the question and answer period Zuch told Haaland how surreal it was seeing someone dressed in apparel she was familiar with.

“I told her this is the first time I have ever seen anybody like me being represented in Congress,” Zuch said. “It was a really moving event and I think a lot of people took some good lessons and we were really inspired.”

When Zuch is asked why she is doing this and why she is at a school that does not support her, she does take a moment to figure it out.

“I can’t just leave it,” Zuch said. “I realize the psychological impacts it could have for someone else, another student. I don’t want that for any future Native student. I can’t leave it. If I leave it, that just makes it worse. If I’m here already, I’m going to do my best to enact some sort of change on whatever level that I can.”

And considering Georgetown really gave her a clear picture about the opportunities she might be able to gain from going there.

“Financially it’s been a little stressful going to school here, but that is the only setback,” Zuch said. “Coming here has helped me regain a sense of identity. I am more proud of who I am and being an indigenous student. And even though I have to represent the indigenous view, whether I like it or not, I’d have to be this role model, I don’t think I have a problem with that.”

And that is one of the reasons Zuch is doing what she is doing. And despite the fights, she is satisfied with her choice of Georgetown University.

“I have to say in general that I’m very happy to be going to Georgetown right now,” Zuch said. “I just hope that I can bring back something to serve my community in Arizona.”

More information or to read the petition is available by at the following link: https://docs.google.com/document/d/1dO9RLQzQevXJ1BMNz4nOH2b3JG_GGxCvjxd_eTiAsoA/edit