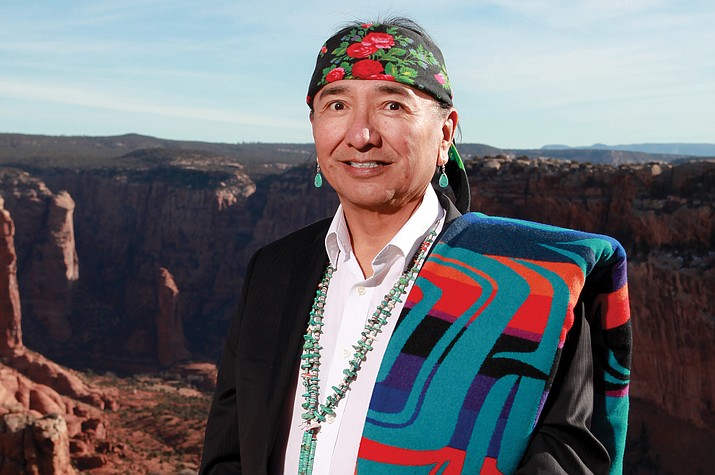 FLAGSTAFF, Ariz. — Rex Lee Jim’s new book of poetry, ‘Saad Lá Tah Hózhóón: A Collection of Diné Poetry’ weaves language and culture into a contemporary landscape that will teach readers about himself, his people, his land and his language.

Jim said the title of the book actually means at the tip of words, language, expression or voice.

“It depends on how you use that sound,” Jim said. “You could translate it as ‘Beauty at the tip of words, or balance at the tip of language.” 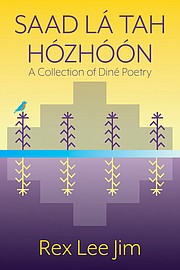 The title and its ways of being translated is one of the reasons Jim wrote the book — because he feels it’s important for Navajo people to think, read, write and publish in Navajo.

“Navajo is beginning to face the loss of language,” he said. “We’re in real trouble. One way to explore the revitalization of language is through creative expression like writing poetry, making movies… we need to do more to expand the capacity of language, not only writing but also in other difficult subject like chemistry.”

Jim said he considers language one of the pillars of sovereignty and for the Nation to be sovereign, its language needs to be strong.

“We need that language for survival and thriving, Jim said. “That’s why we need to publish now in Navajo — stories for children give context for young people to discuss.”

Jim said one idea is for there to be a Diné College press and why Salina Bookshelf (which published his book of poetry) is so important.

“I would like to see books published entirely in Navajo without the English translation,” Jim said.

He insisted on the back cover of the collection that it is up to the Navajo people to do the work necessary to retain their sense of themselves.

“We must relearn and practice our ceremonies,” Jim said. “We as a people, individually and collectively, must demand of ourselves to put into concrete actions the rights we fight for. We must take charge of our own lives.”

Jim, who did the English translation of his book himself, said readers do miss something when they are just reading it in English. The poetry reflects his life, language and culture through the Navajo language (Diné Bizaad). 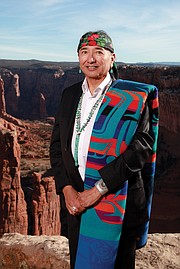 Jim encourages Navajo people to try and read the book in Navajo. In fact, part of the reason for the book, is for people to ask someone who is fluent in Navajo what the words mean, if they don’t understand it themselves, instead of looking at the English translation. In this way, family is talking and interacting with each other.

“A lot of young people will say, ‘I don’t know this phrase, or this word or this story,’” Jim said. “And so they end up going back to their parents or grandparents and asking them to read it to them, that’s what I really enjoy about these poems. Not that someone will analyze them individually, but it allows them to connect back to family and beginning dialogue with their elders.”

Jim emphasizes that elders do know the words, the songs, phrases and the meaning behind the stories. That is what he finds important about his collection of poetry.

“For me, it connects the family,” Jim said. “It is the collective ownership of stories instead of an individual act. Storytelling is a collective action — a collective way of talking about values, about principals and ways of doing things together.”

But, Jim said, the main point is the Navajo language and he encourages young people to not only read his work and reconnect with their families through that work but to try writing and expressing themselves in the various ways that are open to them, while using the Navajo language.

And while he knows that usually language preservation is all about preserving the traditional use of language, Jim said he feels no fear in using contemporary ways of creatively using and preserving language.

“Open it up,” he said. “We have the capacity to grow. Everything evolves including language.”

Jim is a former vice president of the Navajo Nation, a poet, a playwright, and Medicine Man.

He graduated from the Colorado Rocky Mountain School in Carbondale, Colorado. He attended Princeton University, Middlebury Bread Loaf School of English, and its Oxford University campus in England. As a poet and playwright, he is fluent and literate in Navajo, English and Spanish, all of which his works are published in. He currently resides in his original hometown Rock Point, Arizona.

More information about the book and other Native American titles is available at www.salinabookshelf.com.