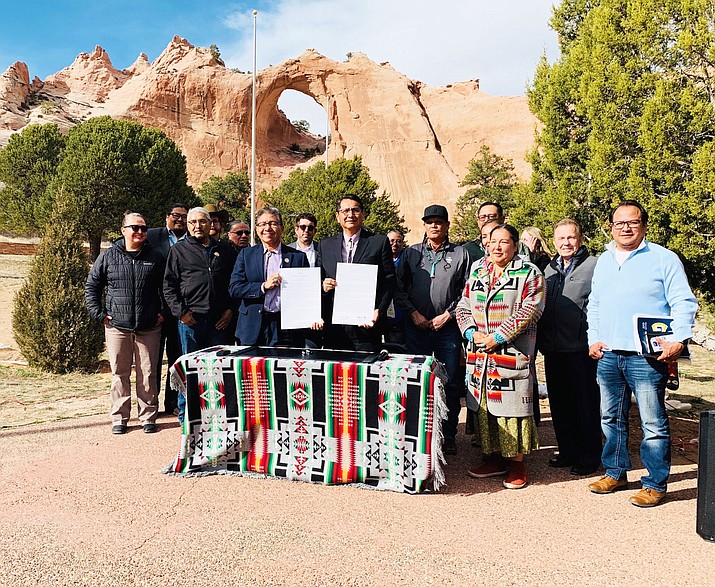 The proclamation known as Navajo Hayoołkaał or Navajo Sunrise, was signed by President Nez and Vice President Lizer at Veterans Memorial Park in Window Rock, to create a new economic vision for the Navajo people through healing the land, fostering clean energy development, and providing leadership for the energy market for the Navajo people.

“The time is now for our Nation to transition and prioritize clean renewable energy. Our people, especially the younger people, want change and that’s what the Nez-Lizer administration is committed to,” Nez said.

On March 21, the Navajo Nation Council’s Naabik’íyáti’ Committee voted down legislation to support the acquisition of the Navajo Generating Station and Kayenta Mine, a clear indication that the Navajo people want a new direction for energy development.

The proclamation states that the Nez-Lizer administration will prioritize providing off-grid solar generated electricity to Navajo households that do not have electricity and building new community and utility-scale clean energy projects. Once this economic engine is established, the administration will continue to secure new investment and new jobs through ancillary industries like the assembly of solar panels and racking systems, further solidifying its role as a leader in the clean energy market.

Nez and Lizer said the administration will support groups that provide off-grid solar power and energy storage for Navajo households that do not have electricity.

“We recognize that the Navajo Nation has been providing electricity for the Western United States for many years while many of our own people lack basic access to power and running water,” the proclamation states.

They also referenced the “Energy Transition Act” in the state of New Mexico, which was recently approved by the New Mexico legislature and signed into law by Gov. Michelle Lujan Grisham, requiring public utilities to acquire renewable resources until electricity generation is 100-percent carbon-free by the year 2045. The law also set aside funds for workforce development and economic development opportunities.

“The world around us is moving ahead with clean energy and the Navajo Nation cannot afford to be left behind, especially when we have many sources of clean energy that can be harnessed to benefit our people,” Lizer said.

The Nez-Lizer administration supports amending the Navajo Energy Act of 2013, to include clean renewable energy as the Navajo Nation’s top energy priority and to create an energy office to oversee energy projects and development.

Nez and Lizer also thanked Honorable Elmer P. Begay and Honorable Amber Kanazbah Crotty for joining them at the signing ceremony and speaking in support of providing renewable energy on the Navajo Nation.

The proclamation states that “through the Diné teaching of “T’áá hwó’ ajít’éego” and for the many who have called upon our Nation’s leaders to transition away from our overdependence on fossil fuels, the Navajo Nation will strive for a balanced energy portfolio and will pursue and prioritize clean renewable energy development for the long-term benefit of the Navajo People and our communities.”