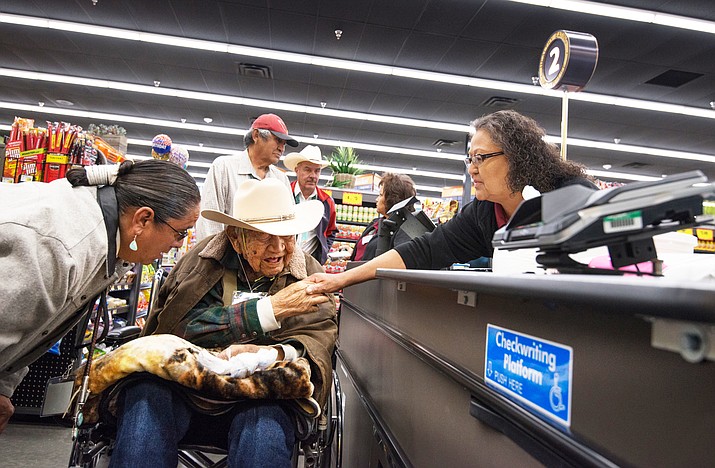 Ram Herder, 100, was the first customer to the new Bashas’ Diné Market April 3, in Sanders, Arizona. Herder is a founding member of the Nahata Dziil community and is a relocatee from Coalmine Canyon as a result of the Navajo-Hopi land dispute. (Photo courtesy of Bashas’ Family of Stores)

SANDERS, Ariz. — It was a day worth waiting for as hundreds of community members and dignitaries gathered April 3 to celebrate the grand opening of a long-awaited shopping center that will primarily serve the communities of Sanders and Nahata Dziil off Interstate 40.

The new shopping center, located in a prime location, opened with three new tenants, Bashas’ Diné Market, Pizza Edge and a laundromat. Community members no longer have to drive more than 50 miles east to Gallup, New Mexico, or west to Holbrook, Arizona, just to buy groceries and basic necessities.

Navajo Nation officials expect a significant reduction in travel for consumers to nearby border towns and they anticipate an increase in Navajo sales tax revenue that typically leaves the reservation. Navajo Nation Shopping Center expects 120 new jobs to be created by this new development which includes future plans for a gas station, a convenience store and a Dairy Queen.

The development of the shopping center took more than 30 years of work by many people, including Navajo community leaders and dedicated economic specialists at the Navajo Division of Economic Development.

The community of Nahata Dziil, which is simply translated to “planning with strength,” came about by the forced removal of many Navajo families that were relocated from the Hopi Partitioned Lands during the Navajo-Hopi land dispute in the late 1980s and 90s. These new lands became home to hundreds of displaced Navajos.

Once here, they felt a disconnection to the land. They needed planning to make it their home and so several community elders, including Ram Herder, who was relocated from Coalmine Canyon near Tuba City, and other local medicine men banded together to lead efforts to plan their community. These meetings led to the first Navajo Nation chapter to be fully planned for housing, grazing and economic development.

In the early 1990s, the community through a chapter resolution requested the Navajo Division of Economic Development to build a shopping center. Through the years that followed, the project managed to survive several tribal administrations and councils.

Thirty years later, the community celebrated the grand opening of their new shopping center that was made possible by key funding appropriations by the Navajo Nation Council and the funding approval by then-Navajo Nation President Ben Shelly, and finally the approval of the construction contract by then-President Russell Begaye in 2017.

It was a joyous day as community members near and far attended the day’s festivities that included food demonstrations, speeches, presentations, tours of the new facility, a luncheon and most importantly, to shop.

The very first customer to the new Bashas’ market was Ram Herder, now 100 years old. He was in awe as he was wheel-chaired around the store with photographers following his every move. He shopped and enjoyed coffee and a small meal from the deli. He was witness to the grand opening event, a vision that he helped to start for his new home of Nahata Dziil nearly 30 years ago and a ground breaking he conducted 10 years ago.

LaVonne Tsosie, another community member and local leader, also helped to make this shopping center a reality and fought for years to keep in alive. In 1995, she, along with Irvin K. James and Jerry Thompson, began the foundational paperwork and lobbying efforts for the much-needed project. On the day of the grand opening, she savored the moment in happiness to see her community enjoy their new shopping center and said she loves it.

“I’m happy for my community and surrounding areas,” she said. “A lot of our people can now afford good food, do laundry without spending time and money going to border town stores; a dream come true for sure!”

Edward “Trey” Basha, president and CEO of Bashas’ Family of Stores, attended the grand opening of the shopping center and said he is thankful for the continued patronage of the Navajo Nation.

“We are honored and humbled to continue serving the people of the Navajo Nation with the opening of our newest Bashas’ Diné Market in Sanders,” he said. “The longtime friendship and connection between Bashas’ Family of Stores and the Navajo Nation is felt throughout our entire organization and we thank this community for welcoming us, yet again, into their lives.”

The Sanders Bashas’ Diné Market is the first new store grand opening for the grocer in a decade and is the eighth store located on the Navajo Nation. Bashas’ opened its first store in Chinle in 1982, followed by Tuba City in 1983, then Kayenta in 1985, Window Rock in 1989, Crownpoint in 1990, Pinon in 1993, Dilkon in 2002 and now Sanders. The new 16,000-square-foot store will offer an “array of healthy and nutritious food choices.”

Marlene Krause attended the ground breaking and bought some bagels and cream cheese, watermelons, doughnuts, chips and soda, and she said she was thankful and happy.

“I love that we actually have a grocery store,” she said. “Now we don’t have to drive 40 minutes to get groceries and necessities — [all] within walking distance.”

For Mary Walters-Begay, the new shopping center symbolizes a vision that is coming to life.

“Giving credit to where credit is due, to the first relocatees who broke ground here 30-plus years ago so we can start a new beginning from our displacement,” she said. “A huge thank you to Ram Herder, Keith Begay, Sam Danny and Billy Yazzie — your visions are coming to life — Nahata Dziil has begun.”