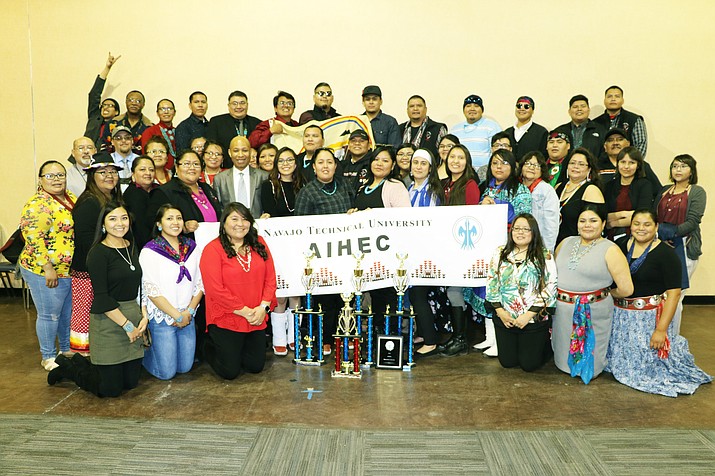 “Each year, students of NTU have been performing exceptionally well at the AIHEC conference’s competitions,” said Dr. Casmir Agbaraji, NTU’s dean of instruction. “I’m very proud of our students and the effort they have put into preparing for the events they participated.”

NTU received honors in the majority of the conference’s writing and poetry competitions. Dana Desiderio was the winner of the Tribal College Journal’s Creative Writing Non-Fiction category for her piece “Exhalation,” while Shy Sloan was recognized in Creative Writing Fiction for her piece, “Shimá Sání.” Both students were recognized by the Tribal College Journal prior to the conference, as were honorable mention awardees Ashley Joe and Ryan Nez for their poetry. Ruby Griffith Ramirez of NTU’s Chinle instructional site was the winner of the AIHEC poetry slam competition, and Lathan Pablo placed third in humorous speech.

In the athletic competitions, NTU students pushed the competition. NTU’s volleyball team returned as champions after taking third place in last year’s tournament. The NTU volleyball team consisted of Dalyna Hannah, Cesily Cicarello, Valorie Thompson, Francesca Hubbard, Malorie McKerry, Chase Bebo, Dakota Plante, and Tyler Begay. NTU’s men’s archery team repeated as champions, and was led by Ryan Yazzie, who placed first overall with a score of 196. Nilsson Wood placed second with a score of 156. The men’s archery team consisted of Yazzie and Wood, as well as Rashaundal Combs and Chase Bebo. The women’s archery team also had a strong showing placing 2nd behind Sinte Gleska University by only 2 points. NTU was led by Darreth Johnson, who placed third overall with a score of 118. Other members of the women’s team included Dana Desiderio, Maureen Greyhair and Nicole Wilson.

Each tribal college’s Student of the Year was honored at the American Indian College Fund’s banquet, as was each institution’s Coca-Cola’s First Generation Scholar. This year, electrical engineering major Darrick Lee of Shiprock, New Mexico was selected as NTU’s Student of the Year, while Loren Tsosie of Leupp, Arizona was NTU’s First Generation Scholar.

“Our students did an excellent job of representing NTU in their respective events,” said Dr. Elmer J. Guy, President of NTU. “It was another exciting year for our students, and I’m pleased with each of their performance and most of all their exceptional representation of our university.”