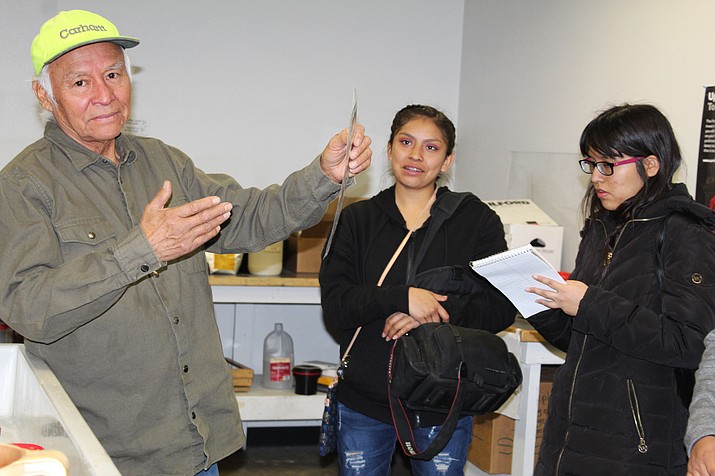 Minkler, who is Navajo, took the students into the photo studio where he took photos of each of them. He told them he is not a mean teacher and doesn’t flunk students because he knows that they come into college immature. He hopes they grow into their work.

Minkler emphasized the importance of lighting, showing them the Beauty Dish and Pro Photos best lights.

The students interviewed members of the NAU Lumberjack newspaper and after watching the NAZ TV broadcast, they interviewed some of the newscasters.

Jacque Thorpe, a video student at Hopi High, said learning from Minkler was cool because he showed how lighting can change photos. She said the Virtual Reality Lab was the best because she never experienced anything like this previously.

“I liked trying the mood and the vibes in the room,” she said.

“It was a good experience to see the way everything works, and how the different people are on and off TV,” she said.

Dalilah Tsosie, who is Navajo, said it was good to see a Navajo teacher in action and she liked that he was descriptive about his photography program.

“I would like to take his class,” she said.

Tsosie said the Virtual Reality Lab was cool, but it gave her a headache.

“It felt weird when I put the headset on,” she said.

Tsosie said it was funny the way the NAZ TV staff interacted with each other.

“They really know each other and I liked the way they worked the cameras and that they can see themselves on the cameras,” she said. “I learned about all types of photography and how they use their gear.”

Aubrey Harvey, a print journalism student at Hopi High, said she would like to take the photography class at NAU because of Minkler. She also enjoyed the 3D drawings at the NAU Virtual Reality Lab.

During the NAZ TV newscast, Harvey watched from the control room.

“It seemed complicated. There were a lot of buttons and it was a lot of work for them,” she said.

Latifah Huma, a print journalism student at Hopi High, said she enjoyed watching Minkler show the students about his job teaching photography. She said the Virtual Reality Lab was impressive because of all the technology they have to use.

Amber Labahe, a print journalism student at Hopi High, said “it was really good the way he (Minkler) does his classes. He engages the students and didn’t show favorites.”

Labahe liked the Virtual Reality Lab because it brings many benefits to the community because it can help people with anxiety, depression and mental illness. She liked the NAZ broadcast because it has a nice big studio.

“The newscasters have to be quick on their toes,” she said.

Kimmale Anderson, a video student at Hopi High, said Minkler gave a good overview of his program. Anderson was happy that he chose her for his first photo.

Anderson said the Virtual Reality Lab was a good experience.

“I heard about it before, but experiencing it is different in a good way,” she said.

Anderson said the NAZ TV students do a good job with their stories.

“They have a good team to get their stories done,” she said. “It shows in their work. They don’t have a hard time working with each other.”