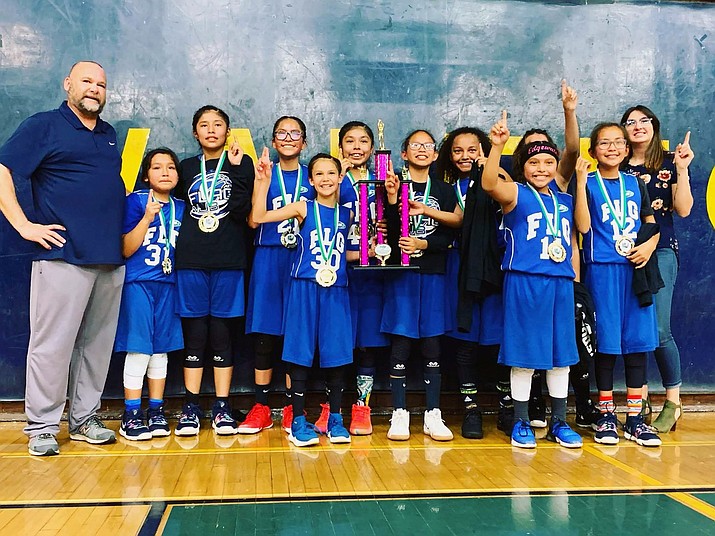 The NAZ Warriors consisted of 10 girl s—six fifth-graders and four sixth-graders — and they played a team consisting of all sixth-graders to win the national championship.

Christian “CK” Kolesar, coach of the NAZ Warriors, said the teams they played were way bigger than them.

“The girls played with passion, intensity and more heart than I have ever seen,” he said referring to his team. “They really wanted it bad.”

Kolesar said they lost their first game March 30 and said the girls were really nervous but they came back strong in the second game, beating a team from Irvine, California, 23-10.

“After that game, the girls all went to the beach together and really had a blast and I think that was the key,” he said. “The next day, they came out and put it to that team 41-18 to move into the championship game against the team that beat us by 9 [points] the first game.”

He explained the team they played next was from Tustin, California, and they were big.

“Their smallest girl was as big as our tallest [player]. We started out down 8-0 after the first quarter. I could tell they were nervous,” he said. “I told them a few jokes in the huddle, and then I told them we have to make them play our game and our game is full court press and pushing the ball. I told them nobody plays defense like we do and defense will win this game.”

Kolesar said his team overcame many challenges but managed to rebound and hustle to eventually secure their one-point championship win.

He said the crowd was unbelievable.

“It was so loud, a lot of northern Arizona people [were] there. It was louder than most high school games,” he said. “I have never heard it so loud in a gym for a sixth-grade game or even a high school game — it was amazing.”

“When the game ended, they were all jumping around with tears of joy,” he described. “They earned it, they never backed down and [they] went toe-to-toe with the big city girls. [I’m] so proud of them, just amazing.”

“I have never seen a group of kids play together as a team, [to] play so hard with such intensity and heart as I did [these] past few days and I’ve been around basketball for 40 years,” he added.

The team consisted of nine Native Americans, eight Navajo tribal members and one team memberwho is half Navajo and half Havasupai.

“I’ve been saying, ‘you guys need to watch these girls, they are special,’ and a lot of people probably think, ‘sure, all coaches say that,’” he said. “Well, I’ll tell you these girls are special. For a lot of them, this is their third year together. Don’t forget these names because if these girls keep playing, they will do way more amazing things.”

“Not only can they hoop but they are all great kids who truly love one another and have come from incredible families who support them and our team like no other,” he said. “It was a total team effort. [I’m] blessed and honored to coach these girls and we’re not done yet.”

He said there were other teams from the Flagstaff National Junior Basketball league that also played. He said every team they sent to nationals won at least one game at the tournament and their fourth-grade girls’ team finished second place and their eighth-grade girls’ team took fourth place in their divisions.

Kolesar, who is also the chapter director of the National Junior Basketball league in Flagstaff, said he was “super proud of all the teams and very grateful of all the coaches and all they do for the kids.”

He said overall, it was a very successful season for Flagstaff’s National Junior Basketball league and he is looking forward to the next season.