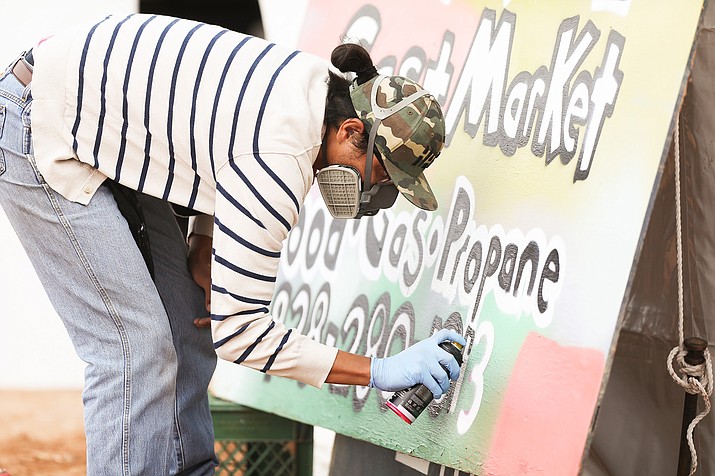 An arist works on creating signage for a business, which is the focus of Change Labs new artist rezidency program. (Change Labs)

TUBA CITY, Ariz. — Change Labs is seeking to change the face of entrepreneurship in Tuba City through programs like a small business incubator and an art residency program while creating a space to support small businesses.

Change Labs is an organization that supports and enables Native American entrepreneurs starting businesses on tribal lands. Grand Canyon Trust is its fiscal sponsor. Change Labs is officially an incorporated nonprofit in the state of Arizona but is still waiting for its 501-C -3 determination from the federal government.

Change Labs' first studio will open on the Moenkopi side of Tuba City in May of 2019, behind the Moenkopi Legacy Inn and Suites, when they will start having office hours.

A hub space for small businesses

The first is co-working space or a hub, which means Change Labs provides desks, printers, internet access and business counselors — and can provide answers about how to start a business and help with creating and printing business cards.

Fleming said she has already heard from people.

“A woman emailed me and said, ‘Can someone meet with me to discuss my business idea? I just want to understand if this will be viable.’” Fleming said. “It can be a question as broad as that or sometimes people ask about the business registration process on Navajo. There are a lot of questions about site leasing and whether that is something they need to do or not.”

The second program is a business incubator. The Native American Business Incubator that used to operate outside of Flagstaff has been folded into Change Labs.

“Their work is continuing but it’s not under NABIN anymore, it’s under Change Labs,” Fleming said. “Jessica Stago runs that program.”

Stago is about to launch the application process for 10 new high potential entrepreneurs this summer.

Change Labs announces a new artist rezidency program in one of its efforts to support small businesses in and around Tuba City. (Photo/Change Labs)

The third program is brand new and is called artist rezidency and the idea came out of Change Labs 'experience in how to leverage Native American artists to benefit small businesses in the community.

Fleming said in the past, artists have been hired from Navajo and Hopi for a day. The artists would come in and help small businesses create a logo, design business cards or even help create a website.

“They have artistic skills and a lot of them are already pretty tech savvy,” Fleming said. “We found it to be a great connection — connecting Native artists to businesses that need their aesthetic and artistic talent.”

The artist residency would formalize that approach. It’s a one-year program and the deadline to apply is April 26. More information can be found here: https://nativestartup.org/rezidency.

Change Labs provides the artist with studio space, a $40,000 living stipend, with $5,000 in art supplies and the opportunity to work with 10 small business enrolled in the business incubator.

“If a business needs a logo, (the resident artist) might help them conceive what an appropriate logo might be for them,” Fleming said. “If an entrepreneur needs a sign, we regularly employ artists to help create signage.”

But one of the most important things that the artist would be doing is, by the end of their term with Change Labs, they need to create one public art work that illustrates the intersection of Native American culture and entrepreneurship.

The reason for the last piece is a struggle that many of the entrepreneurs Change Labs has worked with face.

There are many examples, one from a person who runs a C-store in her community. She told Fleming that members in her community come in to the store and expect her to give them credit.

Other entrepreneurs have reported that they’ve been called apples or skinwalker’s apprentices.

“There definitely can be a negative stigma around the concept of business and entrepreneurship,” Fleming said. “It doesn’t really help that we don’t have words in Navajo, or even Hopi, I think, for business or a concept that describes entrepreneurship.”

Fleming said particularly the older generation may believe that if someone goes that route, they must be a greedy person or that they must be doing something really negative on the side to be able to succeed.

“We just want to destroy that narrative and create a new one,” Fleming said. “A positive one about the strength of entrepreneurship in our communities and how we’ve been entrepreneurs for decades — through barter, through trade — that it’s something to be celebrated not to be brushed aside.”

That is one of the underlying goals of the artist residency program, Fleming said — to promote stronger ties between entrepreneurs and artists — what it means to be a Native American entrepreneur in this century.

The fourth program is called the doing business report, which is Change Labs' main advocacy tool. The first three programs are about supporting, enabling and fostering small businesses in the Western Agency and Hopi Nation.

But the doing business report is what Change Labs is doing to create more support for entrepreneurship within tribal government.

"Creating a business on tribal lands is a real headache. At least it is on Navajo. I don’t pretend to know about it on Hopi,” Fleming said. “But just the sheer number of steps and the time it takes to get through a business site lease is ridiculous. It’s just not viable for a small business that’s bootstrapping their way to creating their business.”

Fleming said when those issues are brought up with tribal council members, there is a lack of empathy and belief that there are enough entrepreneurs out there affected by the problem.

So part of the goal of the doing business report is to collect the data on the number of small businesses that are operating on tribal lands and therefore creating income instability in the communities.

“How important that is to economic development in our area,” Fleming said.

The second part of the report is to benchmark the state of doing business, specifically on the Navajo Nation. To do that, Change Labs is using established indicators by the World Bank.

“The World Bank does this every year,” Fleming said. “They publish a report on doing business around the world where they rank most nations in terms of how easy it is to do business there.”

The Navajo Nation isn’t included in that ranking, but the World Bank publishes all their indicators so anyone can do it.

“We just want to throw the Navajo Nation into the mix because, just by my back of the napkin estimation, looking at the World Bank indicators, it looks like the Navajo Nation would rank among the worst places in the world to do business — below Haiti and Venezuela, even.”

Fleming points to academic research that has already been done which describes the caustic business regulatory environment on tribal lands.

“From our perspective, it’s about, what is it going to take to drive our leaders to action to change that regulatory environment, to support small businesses, to make it something that they are actively investing in, not just more casinos, not just more coal plants,” Fleming said. “But also doing things that enable the creation of more small businesses.”

More information about Change Labs in Tuba City can be found here: https://nativestartup.org/.