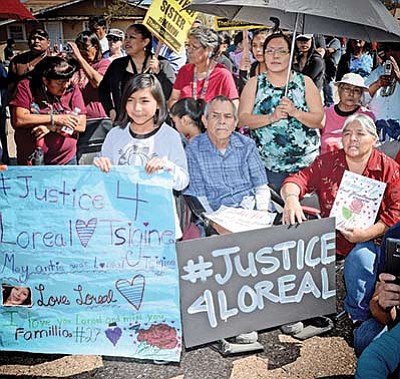 FLAGSTAFF, Ariz. (AP) — Attorneys for the U.S. Justice Department want a federal judge to drop a lawsuit that faulted the office for not prosecuting an Arizona police officer in a Navajo woman’s death.

The Navajo Nation sued the federal government and the city of Winslow in March on behalf of Loreal Tsingine’s (SIN’-uh-jin-ee) daughter.

Authorities say Tsingine posed a threat to now former Winslow police officer Austin Shipley when he killed her in March 2016.

Navajo officials say he should have used non-lethal force. The tribe alleged violations of her equal protection rights in its claim against the Justice Department.

The department has said it couldn’t prove beyond a reasonable doubt that Shipley willfully used excessive force.

It asked a judge this week to dismiss the federal defendants, saying they are immune from lawsuits.