Despite thin record on Native law, tribes wary of Kavanaugh 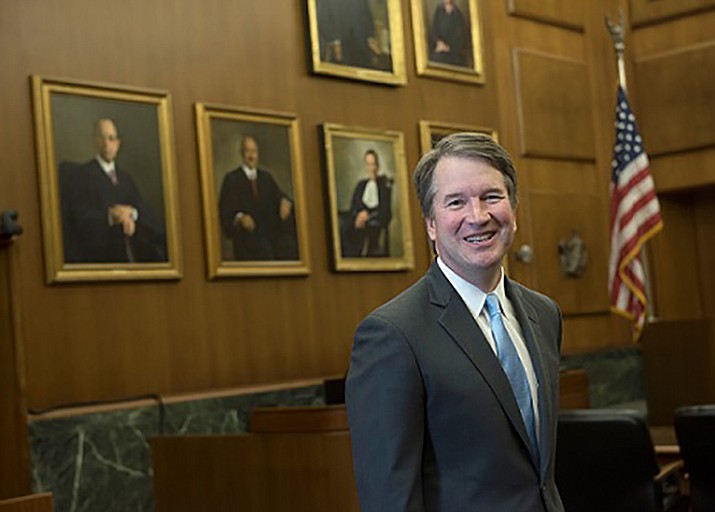 U.S. Circuit Court Judge Brett Kavanaugh has not ruled often on tribal law cases, but Native American groups and law experts say his ruling and writings in other cases have them concerned. (Photo courtesy U.S. Circuit Court for the District of Columbia)

WASHINGTON — Add Native Americans to the list of groups concerned about Judge Brett Kavanaugh’s nomination to the Supreme Court.

Tribal and legal officials could not point to a case involving tribal rights that Kavanaugh has handled as a judge, but they said his writings as a lawyer and his rulings in environmental and voting rights cases give them pause.

“He fails to recognize what’s been done to put them (Native Americans) at a historical disadvantage,” said Laura Berglan, attorney general for Arizona’s Pascua Yaqui Tribe. She said the tribe’s opposition to Kavanaugh’s appointment stems primarily from his lack of understanding of tribes as a race and tribal sovereignty.

The Pascua Yaqui sent letters to members of the Senate Judiciary Committee urging them to reject Kavanaugh’s confirmation, while other tribes have contacted members of the state’s congressional delegation to express their concerns.

It comes as a Judiciary Committee vote on Kavanaugh’s nomination has been put on hold after an allegation that he sexual assaulted a girl decades ago while in high school in the Washington area.

Kavanaugh has vehemently denied the completely false allegation and could face his accuser, Christine Blasey Ford, at a committee hearing on the issue.

Kavanaugh, a former aide in the Bush White House and a judge on the U.S. Circuit Court for the District of Columbia for the past 12 years, is President Donald Trump’s second nomination to the Supreme Court.

His appointment to the circuit court was marked by contentious hearings, and his most recent nomination has been no different, with the Judiciary Committee holding several days of marathon hearings with members split on party lines. He mostly declined to answer Democratic questions about how he might rule on abortion rights, gun rights and executive privilege, among other issues.

Little was made of Kavanaugh’s history on tribal affairs, but legal and tribal advocates said they are concerned by past writings on the legal status of Native tribes, his record on environmental regulation and a 2012 ruling on a voter ID law.

But as a Supreme Court justice, Kavanaugh could be expected to be rule on a few cases every year that are related specifically to tribal law – and many more that would be turned away by the high court without a hearing.

From 1989 to 2014, the court heard 49 cases related to Indian law, or about two per term, according to a study by University of Connecticut School of Law Professor Bethany Berger. She found tribes lost at the court 76.5 percent of the time, 82 percent of the time in the first decade of the current Roberts Court.

Berger said then that while the court remains a very dangerous place for tribes, there was a glimmer of hope based on some rulings in 2016. Justice Neil Gorsuch, appointed since then, seems to be well-acquainted with tribal law, she said Sept. 17, but with Kavanaugh it will be wait and see.

Matthew Fletcher, a law professor and director of Michigan State University’s Indigenous Law and Policy Center, said tribes across the country are worried about a friend-of-the-court brief Kavanaugh filed in Rice v. Cayetano, a 1999 Supreme Court case regarding Native Hawaiians.

It involved a challenge to the Hawaiian Constitution, which prohibited anyone but descendants of native Hawaiians from voting for the trustees of an agency that administered benefits to them.

In his brief, Kavanaugh agreed with Rice that the law was unconstitutional because it allowed a government benefit to be given based on a racial preference. The Supreme Court ultimately agreed, with Justice Anthony Kennedy – whom Kavanaugh has been nominated to replace – writing for the majority that the law was wrongly based on race, not ancestry as the state claimed.

Fletcher said the brief causes concern among tribes that Kavanaugh regards American Indians as simply a racial minority, not as sovereign nations with separate legal rules enshrined in the Constitution.

Fletcher called Kennedy a major influence on Kavanaugh’s thinking regarding Native Americans. Although no one can be sure what Kavanaugh’s policy toward Native Americans will be until he’s on the bench, Fletcher said it’s a fair bet that he will not be supportive of tribal rights.

Fletcher added that what he called an anti-environmental regulation record like Kavanaugh’s usually goes hand-in-hand with opposition to tribal legal rights.

That was echoed last week by Rep. Raul Grijalva, D-Tucson, who told a meeting of the National Congress of American Indians that it is clear to me that the future of federal Indian law is at stake with Kavanaugh’s nomination, according to a statement from his office.

NCAI did not respond to requests for comment last week on the nomination. But in statements shortly after his nomination this summer, officials there urged the Senate to proceed carefully, citing issues from environmental rights to voting rights to freedom of religion that affect tribes.

Berglan and Pascua Yaqui Council Member Herminia Frias said Kavanaugh’s record on environmental issues is worrisome, as is his record on voting laws.

Rep. Ruben Gallego, D-Phoenix, said he did not discuss the nomination with NCAI leaders last week when he met with them in Washington, but he was aware of tribal worries about Kavanaugh.

“I’ve heard some constituent concerns … that Kavanaugh would not be beneficial to tribes and does not look fondly upon tribal sovereignty,” Gallego said.

Udall, who represents a large number of tribes, criticized Kavanaugh’s views of Native legal status, saying in a statement that his confirmation poses a real threat to bedrock federal Indian law and policy principles that have guided the high court for decades.