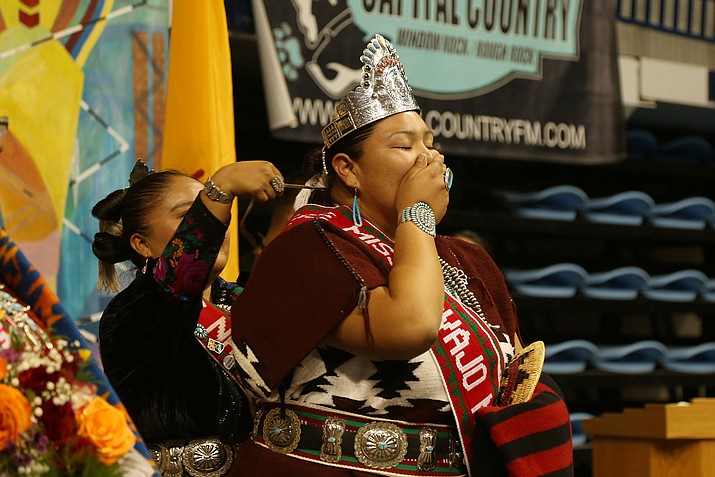 WINDOW ROCK, Ariz. — The Navajo Nation welcomed Autumn Montoya as the 2018-2019 queen when she was crowned Sept. 8 at the Fighting Scouts Event Center in Fort Defiance, Arizona.

At the coronation ceremony, Navajo Nation President Russell Begaye congratulated Montoya for earning the title of 2018-2019 Miss Navajo Nation, saying that he looks forward to her reign.

“We are looking forward to learning more about her platform and what she wants to achieve,” Begaye said. “The Office of the President and Vice President (OPVP) will be there to help her accomplish those goals and dreams she has for the Nation.”

Begaye presented outgoing 2017-2018 Miss Navajo Crystal Littleben with an honorary Pendleton blanket for representing the Navajo Nation in a dignified manner during her reign.

“I’d like to congratulate Ms. Littleben for being an exemplary ambassador and for her distinguished service,” Begaye said. “We wish her well and know she will have a successful career.”

As Jake was announced as first runner up, Montoya became overwhelmed with emotion, knowing she would be crowned Miss Navajo. The joyfully tearful Miss Navajo thanked her family for instilling her with traditional teachings and Navajo customs.

“I’d like to thank my parents and grandparents for supporting and encouraging me. I love you all so much,” she said. “When I was dropped off on Sunday, I was all by myself. I had to carry myself forward and show my strength.”

Montoya thanked her fellow contestants, the Office of Miss Navajo and the OPVP. Begaye congratulated the Eastern Navajo Agency for having a contestant from their area chosen as the new Miss Navajo.