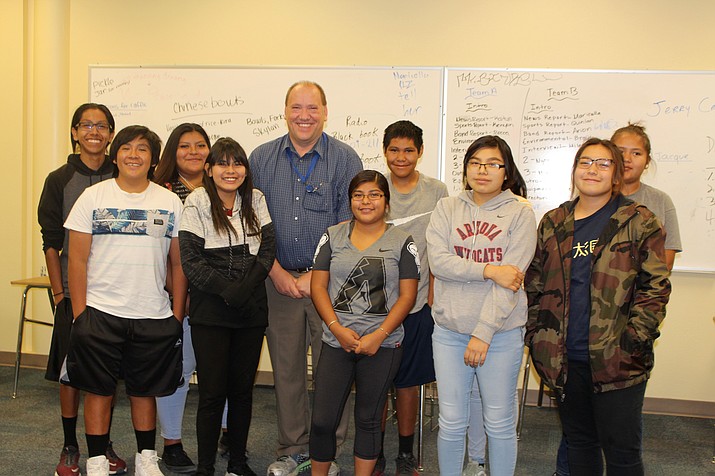 POLACCA, Ariz. — Hopi High Dean of Students Jerry Cronin, a three time cancer survivor, is convinced his cancer is a result of water that was contaminated because of uranium spills in Church Rock, New Mexico.

Cronin, who recently took the dean of students job at Hopi High, beat colon cancer in 2005 and bladder cancer in 2010 and 2013. Cronin went through chemotherapy treatments each time.

Cronin, who is Irish and Scottish, spoke to the Hopi High sophomore AVID students and told them the worst uranium spill in U.S. history took place in 1979 in Church Rock.

“The river turned orange and all the poison went downstream,” he said.

Cronin said according to treaty rights uranium spills are supposed to be cleaned up, but many have not. He said Uranium Resources International (URI), based in Canada and Texas, was the company responsible for the uranium spill.

Around the year 2000, Cronin was living near Gallup.

“What’s the connection?” he asked.

“And even then it’s too deadly to digest,” he said.

Cronin carries bottled water with him because he will no longer drink tap water.

“That’s where I think it came from,” he said about the different types of cancer he has had.

Cronin said uranium also builds up in plants and animals. He said there are 103 remaining open uranium pits on the Navajo Nation.

“Kids play in that stuff,” he said.

Cronin said at one point all the students attending Wingate High School, which was near the uranium spill, were in special education.

“There are problems for everyone living in that area,” he said.

Cronin said URI left from 1979-2018, but now wants to return because uranium has again become profitable.

Cronin said he learned about his first cancer when he was working on a home site and came down with kidney stones. He went to the hospital where he was told he had a mass, also known as a tumor. He ended up going for treatment in the Harvard area in Massachusetts.

“I lived in a bed with six tubes in me. I had a lot of morphine and the chemo made me very sick,” he said.

Cronin said his family watched as he battled painful mouth sores and lost his hair.

“It made me so sick I could only eat baby food,” he said. “A lot of times you want to give up, but I decided I wanted to stay because I wanted to watch my grandbabies grow up. The little motivations keep you going.”

Cronin said some of the treatments resembled medieval tortures.

Cronin previously taught at Santa Fe Indian School where many of his students were Hopi.