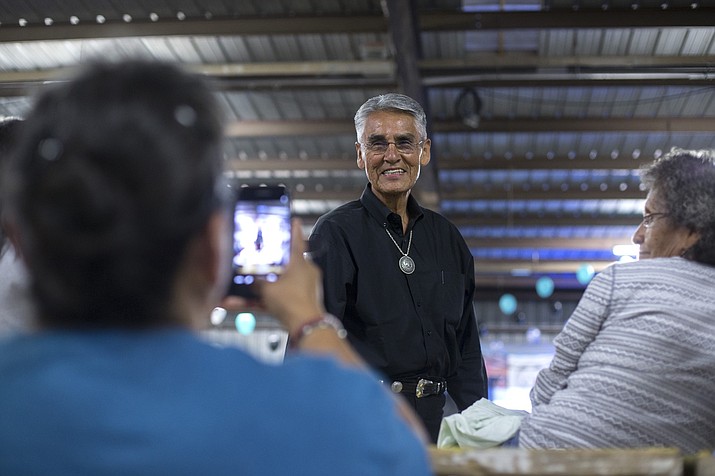 FLAGSTAFF, Ariz. (AP) — A former two-term Navajo president seeking to recapture the office was forced to pick another vice presidential candidate Sept. 4 after discovering his earlier choice wasn’t eligible because he isn’t registered to vote.

Joe Shirley Jr., who left the presidency in 2011, announced the selection of high school principal Peter Deswood III as his running mate at a press conference Tuesday in the tribal capital of Window Rock. A banner behind the podium already had their names printed on it.

But as the deadline neared for Shirley to record his choice with the tribe’s election office, officials told the campaign Deswood was listed as an inactive voter. He last registered in 2015 but was purged from the voter rolls because he did not cast a ballot in the last two consecutive major elections as required by tribal law, said Murray Lee of the election office. The purge affected more than 55,000 voters, not all of whom re-registered.

Shirley later chose Buu Van Nygren, a 31-year-old operations trainer for a national construction company who is from the Utah portion of the reservation, as his running mate.

Nygren has bachelor’s and master’s degrees from Arizona State University. Nygren said he understands the needs of the youth because he’s a recent college graduate and the needs of the elderly because he grew up without running water or electricity and speaks fluent Navajo.

Shirley, of Chinle, Arizona, faces current Vice President Jonathan Nez in the Nov. 6 general election. The two beat out 16 others in a record field of candidates to win the primary, with Nez getting more than twice as many votes as Shirley.

The reservation is the country’s largest at 27,000 square miles in Utah, New Mexico and Arizona. Candidates typically choose a running mate from another state to broaden their voter base.

Nez bucked the tradition in picking Myron Lizer, who oversees Ace Hardware stores on the reservation. Both are from Arizona.

Nez credited Lizer for his management skills, bringing people together and guiding Navajos in financial literacy. He called Lizer a “great, bright individual” who can help improve the tribe’s economy and encourage young, educated Navajos to return to the reservation.

“I met Mr. Lizer a few times throughout my tenure, and he has always challenged leaders to have the Navajo Nation be business friendly,” Nez said.

Lizer is a graduate of Window Rock High School and earned a bachelor’s degree in business administration from Fort Lewis College in Durango, Colorado. He previously worked as an accountant for the Southern Ute Indian Tribe. He and his wife Dottie have three children.

“I bought into this ticket with the mindset of politics,” he said. “And the definition I’ve long held is the ability to influence someone’s decisions, not through coercion or through sleight of hand but being mindful and holding to disciplines that add fruit to your tree.”

Nez said he and Lizer would continue campaigning as he did before the primary — visiting communities on and off the reservation and listening to Navajo people.

Deswood said he would support Shirley in the election.

Deswood said he did not recall being notified by election officials that his name would be removed from the voter rolls. He said he wasn’t able to make it to his home chapter in Upper Fruitland, New Mexico, to vote in the primary election or might have discovered then he wasn’t registered.

“I feel bad right now about this whole thing because I worked hard to get to this point,” he said in an interview.

“However, I promise that I will continue to do my part as an informed citizen, voter and educator who is committed to bettering our nation,” he wrote.