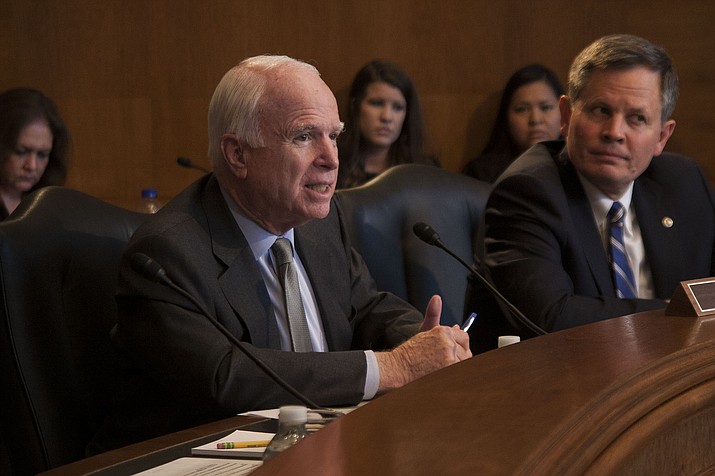 The late Sen. John McCain on the Senate Indian Affairs Committee with Sen. Steve Daines, R-Montana, right, who said McCain’s work there benefited Native Americans across the country and not just in Arizona. (Photo/Danika Worthington by Cronkite News)

WASHINGTON —Mention the late Sen. John McCain and images of a war hero or a presidential candidate come to mind — but for far longer than he spent in those roles, McCain was a friend, and sometimes irritant, to Indian Country.

There were disagreements — one tribal leader called it a warm relationship with icy moments — but despite times of tension, Native American and Senate leaders describe McCain as a firm advocate for tribal rights.

Navajo Nation President Russell Begaye called his relationship with Sen. John McCain as a warm one, but with icy spots. “We’re friends, at the same time, we’re both advocating for our people,” Begaye said recently. (Photo/Arren Kimbel-Sannit, Cronkite News)

“He never worried about whether he was going to be popular or unpopular,” said National Congress of American Indians President Jefferson Keel. “He did not worry about that. He did what was right.”

McCain served more than three decades on the Senate Indian Affairs Committee, twice serving as its chairman, sponsoring or cosponsoring bills ranging from water rights and education to gaming and economic improvement for Native American communities.

Mike Andrews, staff director and chief counsel for the committee, said he would at times clash with other members who would argue with the Arizona Republican on issues he felt passionate about.

“He called people out on the carpet, regardless of political affiliation. That’s probably the beauty of Sen. John McCain,” said Andrews, who worked closely with the late senator. “If the treaty’s responsibility wasn’t being upheld, he’d call you out on the carpet.”

Sometimes that extended to tribal leaders as well as fellow senators.

“We’re friends, at the same time, we’re both advocating for our people,” Begaye said in an interview on “Arizona Horizon” shortly after McCain’s death last month of brain cancer.

Begaye described his relationship with McCain as a warm one, but with icy moments. One of those disagreements included a long-standing land dispute over Navajo and Hopi relocation, something Begaye said was a top issue in meetings between the two men.

“When my people were forced off their land, their aboriginal land, they were made promises for economic development, housing, health, those types of things, and roads,” said Begaye, who said many promises have still not been met.

Another sore spot was McCain’s support for a deal that swapped thousands of acres of federal and private land in southeast Arizona to clear the way for a proposed copper mine. Some of the land in the Resolution Copper deal was Oak Flat, land considered sacred by the San Carlos Apache.

“For Native people, he ran a really, really good race,” said Ken Duncan, a San Carlos Apache member. “But when it came to the finish line, he changed teams. It’s how he finished the race that’s his legacy.”

But others see a different legacy, pointing to the energy and passion for Indian Country that he brought to the Indian Affairs Committee.

McCain helped pass the Indian Gaming Regulatory Act of 1988 that let Native Americans tap into the billions of dollars in revenue from casino gambling.

“He did see the need for the Indian gaming community,” Keel said. “That was a great help for Indian Country.”

Members of the San Carlos Apache tribe came to Washington to protest in 2015 after Sen. John McCain helped arrange a deal that traded Oak Flat – land tribe members said was sacred – and other lands to clear the way for a southeast Arizona copper mine. (Photo/Jamie Cochran, Cronkite News)

Sen. Steve Daines, R-Montana, a member of the Indian Affairs Committee, said McCain went beyond Arizona to help tribes all over the country. He recalled how McCain helped him solve a century-long land exchange issue facing Montana’s Northern Cheyenne Tribe.

“Sen. McCain was a respected, bipartisan leader. He worked with me to get this land exchange issue sorted out. It was one problem the Cheyenne tribe faced over 100 years,” Daines said. “I am forever grateful to him for doing that.”

Andrews said McCain’s dedication for progress and accountability in the committee made him a fighter Indian country needed. That could be seen in 2005, he said, when McCain sided with tribes who were defrauded of millions of dollars by lobbyist Jack Abramoff.

“Under Sen. McCain’s chairmanship, he conducted a full investigation and brought to light some of the seediness of what goes on when you abuse power,” Andrews said.

One of pieces of legislation McCain co-sponsored was a bill extending federal support for an AMBER Alert system to help find missing children in Native American reservations. That measure was signed into law by President Donald Trump in April.

Although they did not always see eye-to-eye, Keel said the country lost a great champion for Native American rights in McCain’s death.

No matter the issues between McCain and tribal leaders, there was always a profound respect for each other and Keel said he believes the late senator did what he thought was best for Indian Country.

“He said, ‘I love Indian Country. I love coming to these events and doing this,’” Keel said recalling his last conversation McCain at a NCAI conference in 2016. “To him, it was a sense of honor. He did honor us.”