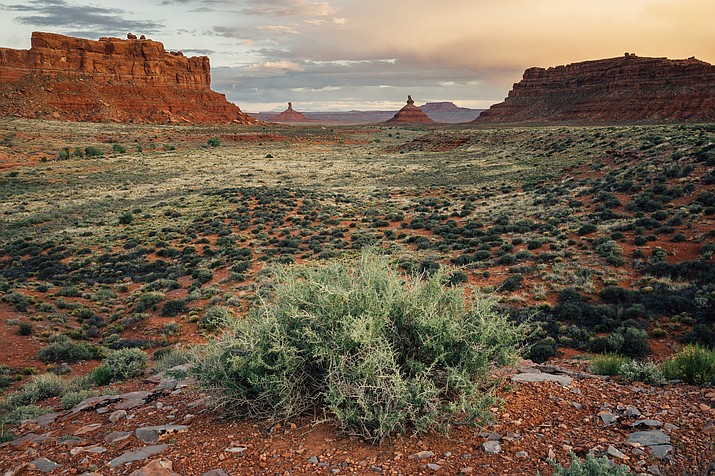 Valley of the Gods in Bears Ears National Monument in Utah. Two spots on a 15-person advisory committee are reserved for tribal representatives. (Stock photo)

SALT LAKE CITY (AP) — A 15-person advisory committee for the downsized Bears Ears National Monument on Utah land considered sacred to Native Americans will include two spots for tribal representatives — three less than what a tribal coalition thinks they should get.

The Bureau of Land Management said Aug. 30 that it will accept nominations until Oct. 1 for spots earmarked for people from different groups who are interested in contributing opinions about the management of the 315 square mile-monument (816 sq. kilometers) in southeastern Utah.

There are openings for two people who represent outdoor recreation sports such as fishing and off-roading that involve going into the wilderness in jeeps or ATVs, and two spots for people representing the general public, with the description specifically mentioning sportsmen or sportswomen.

The committee calls for one spot each for a San Juan county elected official, a representative from state government, a paleontologist, an archaeologist, conservationist, hunter, private landowner, a local business owner and a cattle rancher who has a grazing permit in the monument.

The BLM will coordinate with the Utah governor’s office to make recommendations that will be sent to Interior Secretary Ryan Zinke, who will make the final decision.

Gov. Gary Herbert is a Republican who applauded President Donald Trump’s decision in December to downsize the Bears Ears National Monument by about 85 percent based on a recommendation from Zinke.

Pat Gonzales-Rogers, executive director of the Bears Ears Inter-Tribal Coalition, said Aug. 31 that each of the five tribes in the coalition should have a spot on the committee.

Gonzalez-Rogers also said the coalition objects to the description of the spots as being for “representatives of tribal interests.” He said the wording should be precise to ensure the spots go to tribal leaders.

“I don’t even know what that means. It is at once vague and institutionally nebulous,” Gonzalez-Rogers said. “Could one live next to a tribe and have an interest?”

The BLM passed along questions about the wording and the composition of the committee to the Department of the Interior, which didn’t return an email seeking more information.

A different advisory commission for Bears Ears made up one elected official from each of the tribes already exists but the five members notified government officials in April in a letter that they won’t attend the meetings to protest what they see as an attempt by the Trump administration to minimize tribal voices, said Natalie Landreth, senior staff attorney at the Native American Rights Fund.

In the letter, the five members said they want to be involved in management of the monument but should not be treated as stakeholders or members of the public, but granted nation-to-nation working relationships with the U.S. government because they are sovereign governments.

Tribal leaders and conservation groups have also repeatedly called on the BLM to halt the planning process because of their pending lawsuits challenging the legality of Trump’s decision.

The commission was created when Obama declared the original monument in 2016. Trump’s proclamation maintained the commission but renamed it the Shash Jaa Commission, using the Navajo name for Bears Ears, and added a spot for a county commissioner from San Juan County, Utah.

Trump said he was scaling back the two monuments to reverse federal overreach and had acted within his authority. Past presidents have trimmed national monuments 18 times, but there’s never been a court ruling on whether the Antiquities Act also lets them reduce one.

Bruce Adams, chairman of the San Juan County commission and supporter of Trump’s move to scale back the monument, said he’s generally pleased with the makeup of the new advisory committee but hopes most, if not all, members live in the county.

“They are the ones that are affected the most,” Adams said.