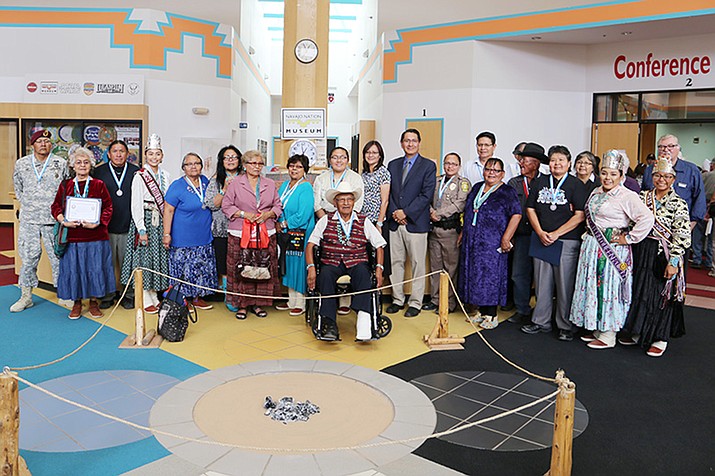 WINDOW ROCK, Ariz. — The Office of the President and Vice President (OPVP) welcomed 21 inductees into the Navajo Nation Hall of Fame Aug. 17.

“Congratulations to all who were selected for the Hall of Fame,” said Navajo Nation President Russell Begaye. “Your contributions are commendable. Your hard work and dedication are making our communities better places. Thank you for all you do.”

Each represented a role as either an emerging young leader or an accomplished elder. Each inductee received a certificate and a medal — and a coveted place on the list of the Nation’s top contributors.

“Under this administration, we are bridging the gap between youths and elders,” said Vice President Jonathan Nez. “When we combine the experience of the elders and the energy of the youth, great things can happen.”

Nez congratulated the hall of famers, placing a medal around each inductee’s neck. He thanked them for their service, much of which is done on a volunteer basis.

“You are the role models,” he said. “You are the trailblazers. There are a lot of problems in our communities, a lot of social ills, but you 21 inductees have shown that our own teachings can heal us. Thank you for laying the foundation. Because of your sacrifices, the Navajo Nation is getting better.”

Inductees into the Navajo Nation Hall of Fame: