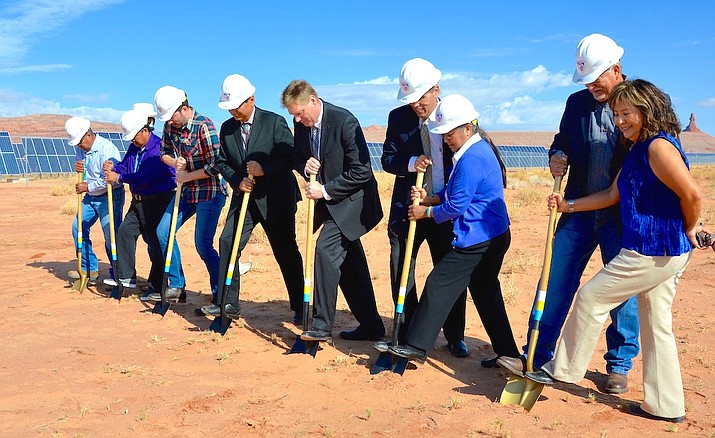 The Kayenta Solar Facility II is the second phase to the existing large-scale solar farm.

The existing solar facility operated by the Navajo Tribal Utility Authority is located on 300-acres of land, and provides approximately 27.3-megawatts of solar energy. The new addition will provide an additional 28.0 megawatts. When completed, the entire solar facility will produce enough energy for approximately 36,000 homes on the Navajo Nation.

During his keynote address, Shepherd, who also serves as chair of the Resources and Development Committee, commended the NTUA staff and board, the grazing permit holders, and community members and leadership for their collaboration and dedication to expand the first-ever large-scale solar farm on the Navajo Nation.

“In April 2016, we broke ground for the initial solar farm and today we celebrate the expansion. Our traditional and modern knowledge of sustaining and utilizing our natural resources has presented many opportunities of growth and development. The solar farm continues to serve as a model for future renewable energy development,” Shepherd said. “We extend our appreciation to the families that voluntarily gave their grazing lands to the build the solar farm to invest in the Nation’s future in renewable energy.”

The families of John Todacheene, Bessie Parrish, Jefferson Yazzie Black, Florence Parris and the late Ella Todacheene, who each held grazing permits within the area, consented to land withdrawals to allow for the construction of the solar facility.

He added that the success of the first phase resulted in a payout of wages totaling $5.2 million to Navajo workers that also received over 4,700 hours of solar utility construction training. Additionally, the solar facility generated approximately $3 million in taxes and we expect to produce similar economic benefits from the solar facility expansion, Haase said.

The Kayenta Solar Facility II is expected to begin operation by June 2019.