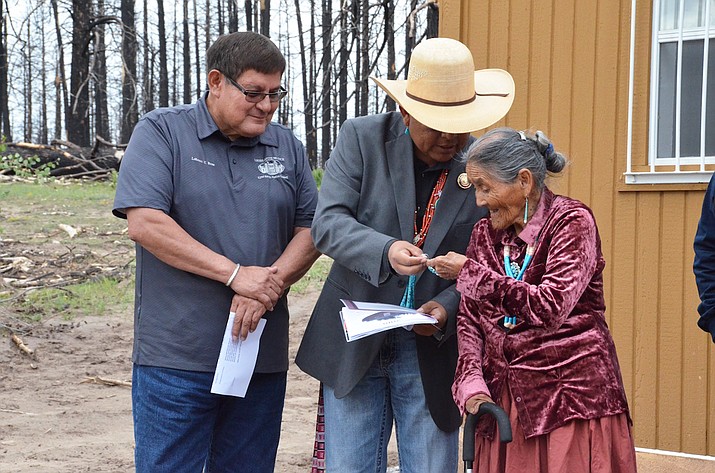 NASCHITTI, N.M. — On Aug. 21, Navajo Nation Council Delegate Steven Begay (Coyote Canyon, Mexican Springs, Naschitti, Tohatchi, Bahastl’a’a’) had the honor of presenting the key to a new home to 84-year-old Emma Roanhorse, a lifelong resident of the Naschitti community who lost her home in the Asaayi Lake Fire in 2014, which burned over 14,000 acres.

Speaking in the Navajo language, Roanhorse expressed her appreciation to everyone that helped to address the loss of homes and said she is thankful for the compassion and assistance that she received from many individuals. She explained that her family has resided in the area for many years and used the land to sustain their way of life through the family’s sheep and cattle. Unfortunately, she sold her sheep because of the loss of grazing areas that were burned in the fire.

Roanhorse was among 19 individuals who recently received new pre-fabricated homes through funding that was approved by the 23rd Navajo Nation Council in February. Begay was the sponsor of the bill that provided over $764,000 to the Naschitti Community Governance to aid in the replacement of the homes.

“The fire caused destruction and damage to the beautiful mountainous forest that the people of District 14 call home. I spent every summer of my life in the Chuska Mountains and it is heartbreaking to see burnt dead trees where tall evergreens once stood. Families lost homes that took generations to build and valuable summer grazing areas were adversely impacted. It’s taken four long years to adjust, rebuild and begin the healing process,” he said.

Begay added that he is very grateful for the council’s support of the families, and expressed his sympathy for elders who lost homes in the fire and passed away before receiving new homes.

“This is a great step forward in the healing process for the land, the families, the livestock and many others who were impacted,” he added.

The funding also allowed the Naschitti Community Governance to hire Navajo workers to lay the foundations, flooring, security doors and windows and other tasks for the homes. The workers began working on the new homes in late May and dealt with many challenges including the rough terrain and remoteness of the area, but many of the workers also said they developed new skills that will be beneficial in the future.

Bates congratulated the families and also thanked his council colleagues for supporting the initiative.