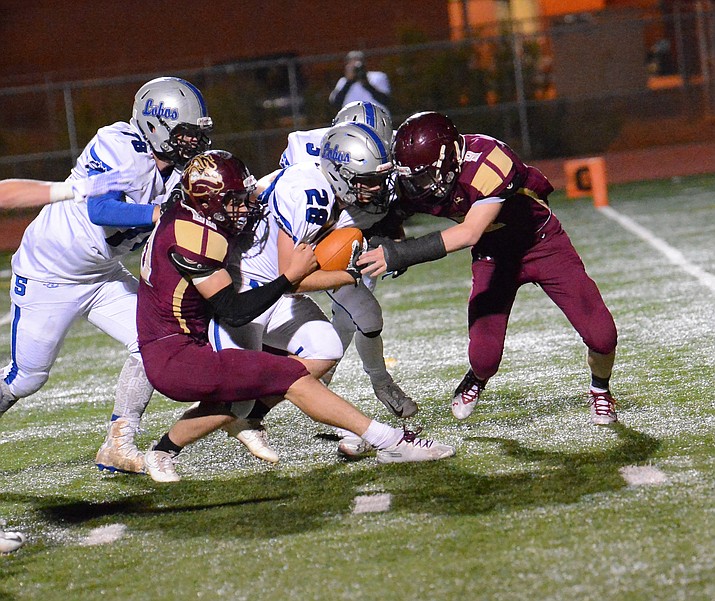 Both teams now head to the 3A State Championships beginning Nov. 2.

The Lobos dominated the game statistically but it was close most of the way. The Winslow defense played well, but the Lobos were only threatened a few times and kept the Bulldog defense on the field most of the game.

Snowflake won the 3A East region and was the second ranked team in the 3A Conference.

Snowflake took the opening kickoff and drove deep into Winslow territory but the drive was stopped by a pass interception in the end zone by Sonny Wilbanks.

Snowflake held and had good field position after the punt, but lost the ball on a fumble. The first quarter ended with the game scoreless.

After a short Winslow punt, the Lobos scored on a one-yard run by Brigden Turley who scored all of Snowflake’s touchdowns. Samuel Crockett converted for a 7-0 lead.

Near the end of the first half, Snowflake took advantage of another short Winslow punt and Turley scored on another one-yard run. The conversion gave the Lobos a 14-0 halftime lead. Before this drive, Sonny Wilbanks had intercepted a Snowflake pass at the one yard line.

The only score in the third quarter was a 28-yard field goal by Crockett to give the Lobos a 17-0 lead.

Turley got his third touchdown on a 30-yard run and Crockett converted for the 24-0 final score. Snowflake showed good sportsmanship by refusing to run up the score when in position to do so near the final gun.

In other important games in the region Blue Ridge beat Payson 43-10. The Yellowjackets are 6-4 for the season and 4-1 in the region and are a likely playoff team. Payson is 4-6 and 1-4, not likely in the playoffs.

Show Low got a forfeit from Holbrook and is 4-6 for the season and 3-2 in the region.