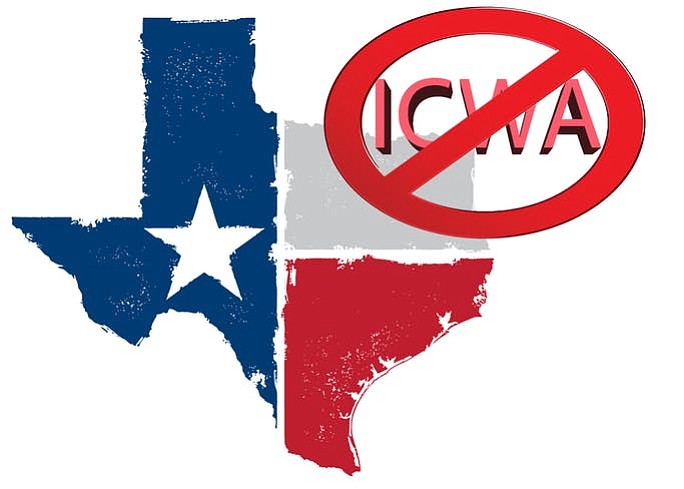 A U.S. Federal Judge in the Northern District of Texas ruled the landmark legislation for the Indian Child Welfare Act as unconstitutional. (Indian Country Today/graphic)

TEXAS — The Indian Childhood Welfare Act was dealt a substantial blow Oct. 5 when a U.S. Federal Judge in the Northern District of Texas ruled the landmark legislation unconstitutional.

According to the law, when a Native child is up for adoption, family members, other tribal members, and then other Native homes are to be prioritized for placement. Ample research shows that all children, Native and non-Native alike, have better outcomes when they are raised with family, extended family or in their community over state child welfare systems and foster homes. National child advocacy organizations have praised the act as a gold standard for child welfare. The act is often referred to by its acronym, ICWA.

The republican appointee, Judge Reed O’Conner, ruled ICWA is a “race based statute” that violates the Equal Protection Clause of the constitution. In the 47-page Brackeen v. Zinke decision, O’Conner also argued that ICWA violates the 10th amendment by “commandeering” state courts to enforce a federal law.

“The Texas decision is a complete outlier from all of the jurisprudence on ICWA to date, but it is not surprising.” says Nicole Adams member of Colville Confederated Tribes and board member at Partnership for Native Children. “The anti-ICWA coalition has been presenting nearly identical arguments in district and state courts for several years with the hopes that they would eventually find a sympathetic judge.”

And in Texas, they did.

While O’Conner’s ruling is currently limited to the Northern District of his state, if this decision is upheld by a higher court, the consequences for Indian Country could be devastating.

“If ICWA is struck down, it’s not a distant legal argument for all of Federal Indian Law to be declared unconstitutional,” Adams said.

Brackeen v. Zinke originated in the adoption of a two-year old Cherokee and Navajo boy by a white couple, the Brackeens, in Northern Texas.

Even though a Navajo family was ready to take the toddler, the Brackeens won their case. Following the suit, the state of Texas, Louisiana and Indiana, along with two other adoptive couples, joined the Brackeens to argue the entirety of ICWA should be declared unconstitutional.

To defend ICWA, four tribes intervened to join the named defendant, the U.S. Department of the Interior.

On Oct. 5, the intervening tribes, Cherokee Nation, Morongo Band of Mission Indians, Oneida Nation, and Quinault Indian Nation, announced in a joint statement they are reviewing the possibility of an appeal, and if filed, will also ask for a temporary suspension of the court’s decision so that Native children in Northern Texas are still protected.

When the Indian Childhood Welfare Act was passed 40 years ago, 25-35 percent of Native children had been taken away from their families and were being raised in non-Native homes. Native American tribes lost a third of one generation.

Anti-ICWA advocates argue that the law is no longer needed. Yet, even with ICWA in place, Native children are still placed in foster care at disproportionate rates.

In South Dakota, Native Americans are less than 15 percent of the state’s population, but Native kids represent 50 percent of all children in foster care, with almost 90 percent of them being raised in non-Native homes.

In Minnesota, Natives Americans are only 1.4 percent of the population, but Native kids represent 23.9 percent of the kids in the state foster care system.

Today, more than half of U.S. states are out of compliance with ICWA rules. If ICWA is struck down, the current crisis would get much worse.

While Indian Country was reeling from the ruling, a well-funded conservative think tank in Arizona was celebrating, calling the decision “a major victory.”

Since launching its Equal Protection for Indian Children over five years ago, The Goldwater Institute has spearheaded and supported anti-ICWA litigation in coalition with members of the for-profit adoption industry and religious organizations.

The institute is funded by Trump’s biggest campaign donor, the Mercer family, and other powerful political influencers including the Koch Brothers and the Devos Family. For years their unprecedented and fringe legal arguments against the constitutionality of ICWA have been partially or completely thrown out. Friday’s decision was the first time their legal strategy stuck.

Even if this specific case is overturned, experts say the constitutional challenges to ICWA will continue. This coordinated attack leaves vulnerable not only Native children, but the whole of federal Indian law.

According to Matthew Fletcher, citizen of Grand Traverse Band of Ottawa and Chippewa Indians and professor of law at Michigan State University — If ICWA is struck down as a “race-based” law, by extension a lot of acts that govern Indian country would be declared unconstitutional.

The deep pockets funding the Goldwater Institute, like the Koch Brothers, are substantially invested in the oil, gas and other extraction industries.

In 2009, The Council of Energy Resource Tribes estimated energy resources on tribal land were worth about $1.5 trillion. Because of the trust status of tribal land, these vast resources cannot be extracted without the tribes’ consent. If the framework of federal Indian law was thrown out, all that land would be open for business.

“Indian Country absolutely should be terrified,” Fletcher said. “This is the fight of the 21st century.”

Nicole Adams and other advocates are calling for Indian Country’s leaders and tribes to act now to protect ICWA and the sovereignty of tribes before it is too late.

“We don’t want to look back twenty years from now and ask ourselves what were we doing when ICWA was threatened,” Adams said.

In an issued statement from the Department of the Interior, Tara Mac Lean Sweeney, assistant secretary of Indian Affairs said,

“For nearly forty years, child advocacy organizations across the United States have considered the Indian Child Welfare Act to be the gold standard of child welfare policy. The Department of the Interior strongly opposes any diminishment of ICWA’s protections for Indian children, families, and tribes, said Tara Mac Lean Sweeney, assistant secretary for Indian Affairs. “The Department will continue to work with tribes and states to implement ICWA moving forward. We reiterate our support for ICWA’s goals of ensuring the safety of Indian children, maintaining Indian families, and promoting tribal sovereignty.”