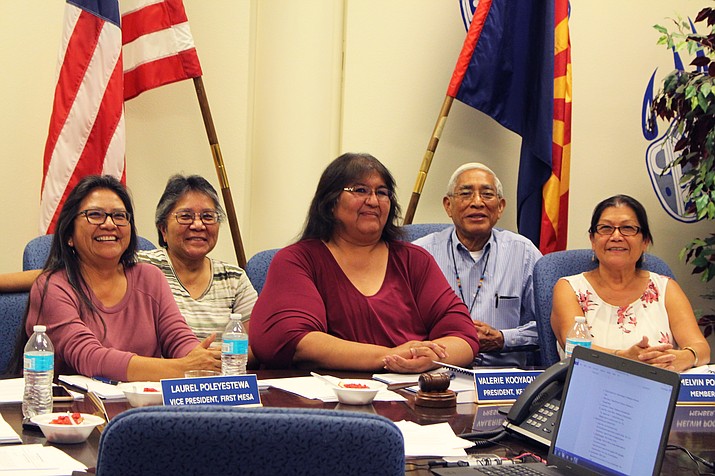 Valerie Kooyaquaptewa, president of the HJSHS Governing Board, said the increase in pay for teachers is long overdue.

Principal Fredericks told the school board that the Advanced Education Committee at the school was looking at ways at increasing the school’s performance. She said the school is also looking at improving its salary schedule for teachers from top to bottom.

“The pay has been frozen for years,” she said.

“We need to be clear and transparent about what they need to do,” she said. “That will take time.”

Principal Fredericks said the extra pay for extra hours is a good way for everybody to get a stipend and be more involved.

“I commend the teachers because they work hard, and a lot of times they work after hours,” she said. “Teachers need to set goals so it would be tied to professional development.”

Principal Fredericks said future raises could be tied to improved student performance and other criteria.

Koyaquaptewa said one possibility is retention stipends for the teachers who are already here.

Laurel Poleyestewa, vice president of the HJSHS Governing Board, said teachers should not get additional stipends if they leave in the middle of the school year.

The HJSHS Governing Board voted unanimously to approve the teacher improvement incentive plan.

The HJSHS Governing Board voted 4-1 to approve contracting out for three professional services: 1-a SPED teacher and compliance officer; 2-speech and language therapist; and 3-transitional services worker. These would be contract workers, not employees.

Pamela Engstrom, special education director for HJSHS, said the teacher and compliance officer position would work four ten hours days so she could work on making sure that IEPs (Individual Education Plans) are in compliance with the law.

Poleyestewa, the lone board member to vote against this measure, questioned how one person could teach and do the IEPs. Engstrom responded that this is why the person would work ten hour days. Engstrom said getting the behavior plans done is crucial.

Poleyestewa said she doesn’t know how many times over the past several years that special education said the problems were resolved, but they were not resolved.

“I expect something to happen this time,” she said.

Engstrom said she is working at getting more training for the SPED staff and those who work with SPED students such as security guards and the Dean of Students when discipline issues arise.

On another SPED issue, the board voted unanimously to advertise for SPED counseling services.

On a third SPED issue, the board voted unanimously to reject the idea of having two SPED workers serve as assistant basketball coaches.

LeNeal Pewewardy, Native American studies teacher, resigned to take a teaching job at Moenkopi Day School after he said he feels he can be more effective working with younger students.

Poleyestewa said she has a hard time letting go of Pewewardy because he has been such an asset to the students.

“We will miss him. I wish there was some way to keep him. I hope he will reconsider,” she said. “Thank you for your service.”

Kooyaquaptewa said the board was reluctant to let Pewewardy go.

Pewewardy said he wants to be more effective.

Pewewardy said the school treated him and his daughter well.

In other board businuess the board directed the superintendent to call a special election for the open board seat at Kykotsmovi. The board also agreed to keep the facilities manager as the supervisor over the security department.