Grand Canyon chief being investigated, will be reassigned 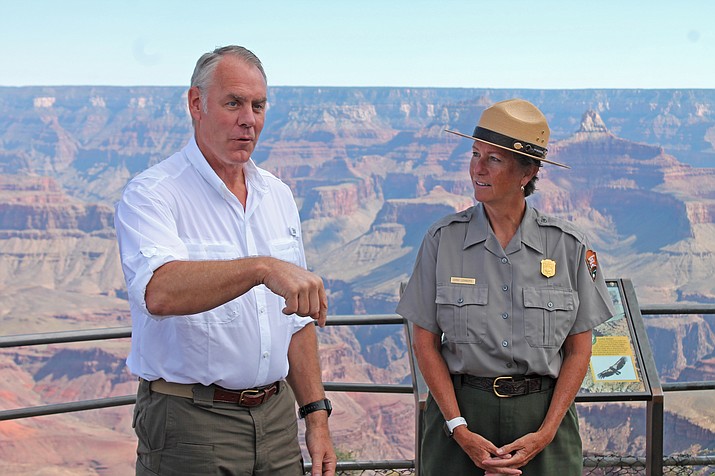 FLAGSTAFF, Ariz. (AP) — The superintendent at the Grand Canyon will be reassigned amid a federal investigation into undisclosed allegations, the National Park Service said Oct. 23, marking the latest upheaval at one of the country's most popular national parks.

Investigators from the Interior Department's Office of Inspector General arrived at the park this week to begin their work. The allegations involve Grand Canyon Superintendent Christine Lehnertz, park spokeswoman Vanessa Lacayo said but would not elaborate.

The inspector general's office declined to say what led to the investigation, the scope or when it might be complete. Lehnertz is on leave but will be reassigned outside Grand Canyon temporarily during the investigation, Lacayo said. Two deputy superintendents will rotate overseeing the park that has 6 million visitors annually.

"We want to make sure we comply with the OIG and give them space to complete their investigation," Lacayo said. "And, in that process, protect the integrity of the investigation and those involved."

According to its website, the Department of Interior’s Inspector General accepts complaints from anyone, including the public and employees, about issues regarding fraud, waste, abuse, misconduct, or mismanagement. Commonly-investigated issues include environmental health or safety violations, significant mismanagement or waste of funds, conflicts of interest or ethics violations, whistleblower retaliations or standard of conduct violations — sexual harrassment or abuse of authority, for example.

In an email to employees, NPS encouraged any employees with information to speak to OIG investigators, who are in the process of performing on-site interviews.

According to a recent article by Cronkite News, once the investigation is complete, the Inspector General’s Office will issue a report to the director of the National Park Service. A public report will be made available 30 days after that. The park will have 90 days to respond to the findings.

Lehnertz is a trained environmental biologist who has been with the park service for more than 10 years. She took the Grand Canyon job in August 2016 as the park's first female superintendent after a sexual harassment scandal led to the retirement of its former chief.

An earlier report by the inspector general's office found that some male employees who worked in the now-defunct river district preyed on female colleagues, demanded sex and retaliated against women who refused.

Investigators have uncovered sexual harassment, bullying and other misconduct at many of the nation's premier parks — including Yellowstone, Yosemite and Canaveral National Seashore.

A survey of park service employees a year ago found widespread complaints of harassment and discrimination in the workplace. Top officials vowed to address the problems that tarnished the agency's image.

Lehnertz was tasked with changing the culture at the Grand Canyon.

"Whether its sexism or sexual harassment or sexual assault, any of those are clearly behaviors that just can't be part of an organization that is inclusive and is respectful and is part of a larger community," she told the Associated Press before starting as superintendent.