Down to the wire: Presidential hopefuls Jonathan Nez and Joe Shirley Jr. face off as election closes in 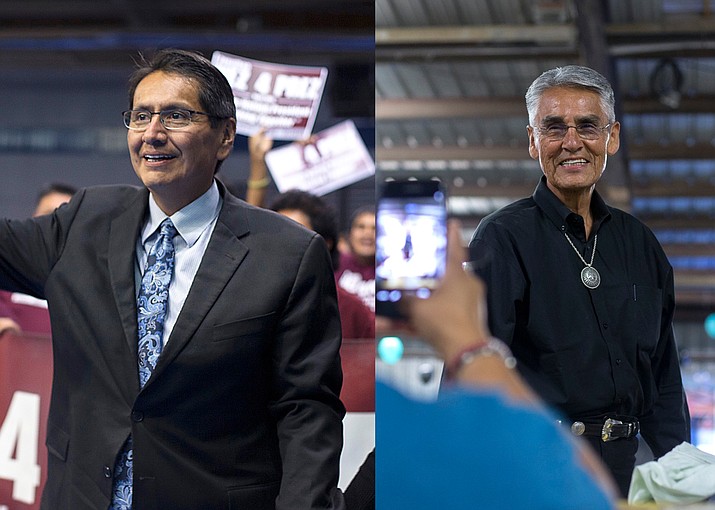 Left: Navajo Nation presidential candidate Jonathan Nez arrives at the sports arena in the tribal capital surrounded by his supporters after winning a majority of the votes in the primary election Aug. 28 in Window Rock. Right: Navajo Nation presidential candidate Joe Shirley Jr. poses for a photo for a supporter at his campaign headquarters at Nakai Hall in Window Rock during the primary election Aug. 28. (AP Photo/Cayla Nimmo)

Shirley said business development, creating jobs is one of his top priorities for his administration.

“We believe we can do that, cut out the red tape, make the land more easily accessible, provide financing for business development for those who want to go into business,” Shirley said. “We talk about bringing our youth home, but what to, without the jobs?”

Shirley also said he wanted to empower chapters to take care of issues that come up locally themselves. He spoke about improving the scholarships given to students, a loan forgiveness program and youth programs.

“We’re going to give it everything we’ve got to accomplish more for you,” Shirley said.

Nez emphasized the importance of the Navajo language to honor relatives and ancestors back at home. He also spoke to the youth about their experiences of leaving the reservation to get an education and then being told they are overqualified when they come back home.

“Legitimacy off the nation is holding these degrees, but legitimacy on the Nation is often being part of government…,” Nez said.

Cynthia Freeman from Cameron, Arizona, said there have been many qualified educators who have worked on the reservation but have eventually left for a variety of reasons. She wanted to know how each candidate would retain and recruit teachers.

Shirley said it is a challenging task because of resources, low salaries, no fringe benefits and no housing for teacher’s impact Navajo teachers who want to come home to teach.

Shirley said that developing small business would help because it would give people something to come back to.

Nez said former president Peterson Zah emphasized good teachers. Nez said as council members, or president and vice president it is important to have that dialogues with the presidents of universities to help them with the priorities for what the Nation needs.

Shirley said it takes money to bring teachers home and build housing for them.

Nez said that Science, Technology, Engineering, Math and Arts are important, too, for Navajo youth.

“We need to remember as indigenous people, we have our own teachings as well … bringing it into the 21st century,” Nez said.

Shirley said that some of the leaders need to hear from youth who are out there building bridges and sky scrapers and what goes into achieving at that level.

“It is always good for our young people to look up to someone and who better than those who are in these programs,” Shirley said.

Both candidates stood up for LGBT rights and for women receiving equal pay for equal work as Navajo men.

Shirley said the current state of public safety on the Nation is atrocious and he again returned to the theme of better pay, fringe benefits, better equipment and housing as a way of improving public safety

“We should be talking about 700, 800 thousand police force out there today, but instead we are going backward, instead we have only 189,” Shirley said.

Nez said that it is important to not only look at crime when addressing public safety, but also to look at the Department of Justice, the court system and the behavioral/mental health parts of it, too. He celebrated the

“We need to put more resources into the public safety system,” Nez said. “It’s just not about police officers.”

In a prior debate held at Navajo Technical University Oct. 16, the two presidential candidates faced off.

In the debate, conducted mostly in Navajo, Shirley and Nez were asked about the closure of the Navajo Generating Station. NGS is scheduled to close in December of 2019 after the owners said they could buy cheaper energy elsewhere.

Shirley said that he doesn’t want to lose the jobs that the plant provided and that he would do everything he could to save those jobs.

Nez spoke about looking at alternative solutions like the solar farm in Kayenta or boosting tourism.

The debate was mostly conducted in the Navajo language and Nez said parents and grandparents are on the front lines of teaching the language with support from school programs, but mostly it comes from the community as well.

Shirley said that language identifies the Navajo people and that Nez had not given resources for that cause.

Both said that places like Navajo Technical University and Dine College were important.