U.S. 89 reopens after wash out
Traffic restored in both directions following fatality and damage caused by heavy rains 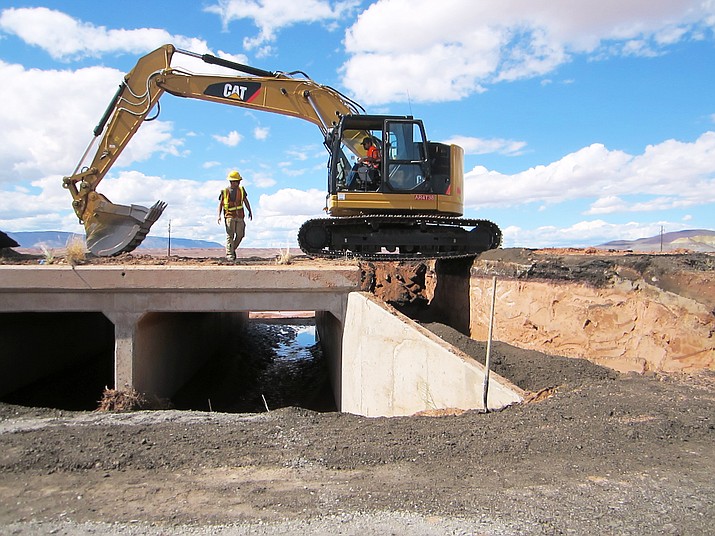 ADOT workers prepare to fill the second break they discovered in a culvert at milepost 471, north of Cameron on U.S. 89. The road collapsed on the south side of the culvert the evening of Oct. 3 because of heavy rains. ADOT worked around the clock to make sure the road reopened quickly. (Katherine Locke/NHO)

CAMERON, Ariz. — The Arizona Department of Transportation reopened US 89 between Cameron and US 160 on the Navajo Nation Oct. 5, two days after the road was closed because of the road collapsing after heavy rains during the night Oct. 3.

Flooding damaged the roadway late Wednesday midway between Flagstaff and Page. The flooding, caused by the remnants of Hurricane Rosa, cut through a 30-foot section of US 89 and the earth below it, requiring ADOT to close the highway in both directions to assess the damage and make emergency repairs.

ADOT spokesman Doug Nintzel said the crews worked around the clock to make the repairs.

“The goal was to reopen the highway as soon as possible, since we know how important [the highway] is for drivers,” he said.

The highway may have opened earlier, but the crews discovered a hole on the other side of the road from where the original crack appeared, and they had to dig that out and fill it in, too.

“Crews worked to restore the subgrade on both sides of the box culvert where the flooding occurred,” Nintzel said.

While the road has been fixed, Nintzel emphasized it is a temporary fix and the road will need to have a more permanent fix in the future.

“ADOT is now preparing for a project that will make longer-term repairs, and is seeking reimbursement through the Federal Highway Administration’s Emergency Relief Program,” an ADOT press release said.

The highway is now open to all traffic. ADOT advises drivers to plan for a reduced speed limit where crews have completed short-term repairs.

“I also want to thank the local people for their patience and those who helped out with food and coffee [for the workers],” Tso said. “I just wanted to thank everybody involved in helping to take care of this problem.”

The Navajo Nation declared a state of emergency for the Western Agency Oct. 4. The Navajo Department of Transportation (NDOT) offered its assistance to ADOT with the repairs.

“NDOT appreciates the quick response by ADOT regarding the road damage on Highway 89,” said Division Director Garret Silversmith. “Historically, NDOT and ADOT have always had a strong and collaborative relationship on transportation concerns and issues through the Navajo Nation and the great state of Arizona.

NDOT also helped with a local detour where Cameron residents could get around the closed highway without using the emergency only bypass set up by ADOT.

A tractor dumps material onto the damaged section of U.S. 89 after it was washed out by heavy rains. (Katherine Locke/NHO)

The Arizona Department of Public Safety confirmed that a two-car accident Oct. 3 was a result of the wash out caused by heavy flooding. The accident occurred at milepost 471.3, near Five-Mile Wash (roughly midway between Flagstaff and Page).

The woman, Amelie Fortune, 26, of France was fatally struck by a car on the collapsed section of the highway.

Troopers were called late on the evening of Oct. 3 to the stretch of U.S. 89 near Cameron. They say Fortune had just crossed a section in her car as it started to give way. She was inspecting the damage when another driver lost control while crossing the collapsed area.

Fortune was hit and died at the scene. Her two passengers were treated and released at a hospital.

Flooding closes US 89 near Cameron
US 89 south of Page collapses
U.S. 89 near Cameron closed due to wash-out
Monsoon rains flood Tuba City and Moencopi Hopi villages
Long-term repairs for 2018 wash out on U.S. 89 begin
Contact Us
Submit Questions, Comments, or Story Ideas