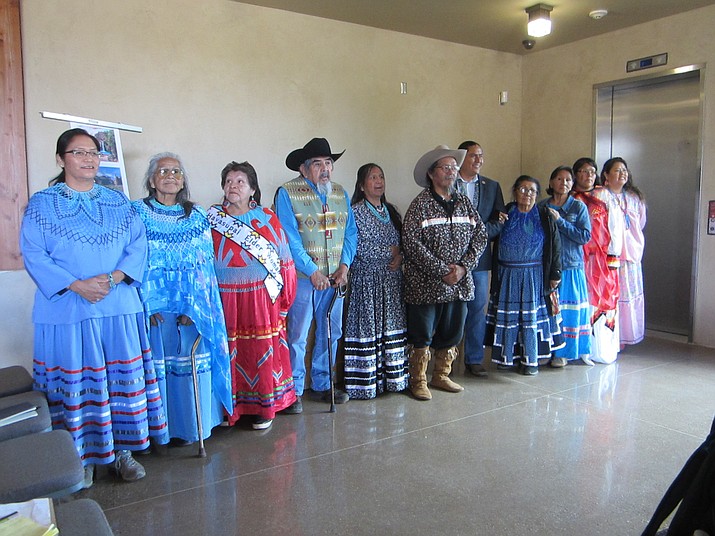 The Havasupai Tribal Council and elders held a press conference at the Museum of Northern Arizona Oct. 4 to discuss the Supreme Court's decision to uphold the mining ban around Grand Canyon, calling it a long-fought victory and the answer to many prayers of the Havasupai Tribe. (Katherine Locke/NHO)

PHOENIX — In a major victory for environmental groups and the Havasupai Tribe, the U.S. Supreme Court on Monday rebuffed a bid by mining interests to overturn a 20-year ban on extracting uranium from about a million acres around Grand Canyon National Park.

The justices, on their first day back from the summer recess, refused to consider a claim by the National Mining Association allowing the U.S. Department of Interior to make such unilateral decisions violates the right of Congress to decide the use of such public property. The justices gave no reason for their action.

Monday’s move leaves intact a 2017 ruling by the 9th Circuit Court of Appeals that Kenneth Salazar, who was Interior Secretary in the Obama administration, had the right to take the action in 2012. The appellate court said while there may be differences in opinion on what danger the mining poses to the water supply, that did not make the withdrawal either arbitrary or capricious.

Judge Marsha Berzon, writing for the unanimous three-judge panel, also said Salazar and his department did not violate requirements for the federal government to promote multiple uses of public lands.

But the implications from Monday’s decision are far broader than whether uranium mining around the Grand Canyon will be off limits through at least 2032. Timothy McCrum, the attorney for the mining group, told the justices that their action — or inaction — also would affect the availability of hundreds of millions of acres of federal lands for mineral and other development.

The decision drew praise from various groups that intervened in the case to keep the ban intact, including the Havasupai Tribe.

“The mineral withdrawal is a necessary way to protect the land and the water that our people and our village depend on,’’ said tribal Chairwoman Muriel Coochwytewa in a prepared statement.

While the legal arguments have run out, Monday’s ruling may not put the issue of mining near the canyon to rest.

Earlier this year, the Department of Interior, now under the Trump administration, published a list of 35 minerals considered “critical to the economic and national security of the United States.’’

And in July the Department of Commerce launched an investigation into whether the “quantity and circumstances of uranium ore and produce imports into the United States threaten to impair our national security.’’ That followed a conclusion by the agency that uranium production, which had met 49 percent of U.S. requirements in 1987, had fallen to just 5 percent.

That latter investigation in particular could lead to a requirement that at least 25 percent of the uranium needed in the United States come from domestic sources.

“That could potentially open up places around Grand Canyon,’’ said Sierra Club lobbyist Sandy Bahr, “as there is additional pressure on the administration and Congress to overturn the 20-year ban, something that apparently remains a legal possibility.”

Mining association spokesman Connor Bernstein acknowledged as much, saying that “unwarranted’’ withdrawals like this of public lands from mining endanger mineral supplies, and not just uranium.

Bernstein said public health has to be the top priority.

“The question is, can we have balance,’’ he said.

And the association also is counting on the change in administration.

“This administration is looking at all these issues with a fresh set of eyes,’’ said Bernstein.

But Berzon, in last year’s ruling, said the collapse of the Soviet Union and decommissioning of many nuclear warheads pretty much halted mining in the area.

There was another price spike in 2007. But Salazar, reacting to concerns about the impact of mining radioactive materials, proposed withdrawing about a million acres from new claims.

The mining interests sued. After being rebuffed in 2014 by a federal judge in Arizona, they took their case to the appellate court.

Berzon said there were legitimate concerns about the potential impact of a large-scale increase in mining. That starts with the mining process contaminating water supplies with both uranium and arsenic, chemicals which may affect plant and animal growth, survival and reproduction, she said. And Berzon noted that multiple reports “all acknowledged substantial uncertainty regarding water quality and quantity in the area, the possible impact of additional mining on perched and deep aquifers, and the effect of radionuclide exposure on plants, animals and humans.’’

The result, she said, was a “measured approach’’ by the department, saying that keeping new mining from starting for 20 years will allow for additional data on things like groundwater flow paths and the contribution that mining makes to radiation.

Berzon said it would be one thing if Salazar’s decision was “arbitrary, capricious, an abuse of discretion, or otherwise not in accordance with the law.’’

The appellate court also backed the finding that the area is of “profound significance and importance to Native American tribes.’’ And the judges said nothing in law requires the Interior Department to limit protection to smaller carve-outs rather than preserving larger areas which have multiple cultural and historic sites.