U.S. 89 near Cameron closed due to wash-out 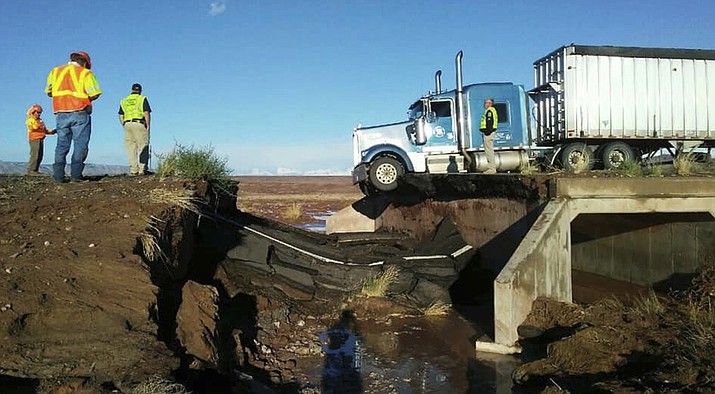 A washout of US 89 has closed the road near Cameron. A woman was killed when she stopped at the washout and was struck by a truck.

A woman was killed following a wash-out of U.S. 89 near Cameron, Arizona the evening of Oct. 3. 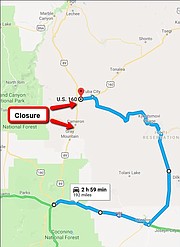 Authorities say a French citizen was killed after she lost control on a stretch of the northern Arizona highway that collapsed from storm damage.

Arizona Department of Transportation said the 26-year-old woman was driving northbound on U.S. 89 and had just crossed a section that started to give way. Troopers say she then got out of the vehicle. That is when a 40-year-old Lakeside, Arizona, man crossed the collapsed area but lost control. His pickup truck struck the victim, who was standing outside of her car. The woman died at the scene. Her two passengers have been released from a hospital.

The other driver and his passenger were treated at the scene.

A 15-mile (24-kilometer) stretch of U.S. 89 is closed between Cameron and U.S. 160 because of damage from heavy rains and officials say the closure likely will last several days and result in a lengthy detour.

The agency says repairs likely will require "an extended closure" and that alternative routes will add about 190 miles (306 kilometers) to a trip. The alternative routes are Interstate 40, State route 87, State Route 264 and US 160. Drivers are advised to avoid taking local roads, which may be unpaved or damaged by the storm.

U.S. 89 reopens after wash out
ADOT begins work on 89A north of Cameron
2013 Year in Review
ADOT begins work to widen U.S. 89 through Cameron
Flooding closes US 89 near Cameron
Event Calendar