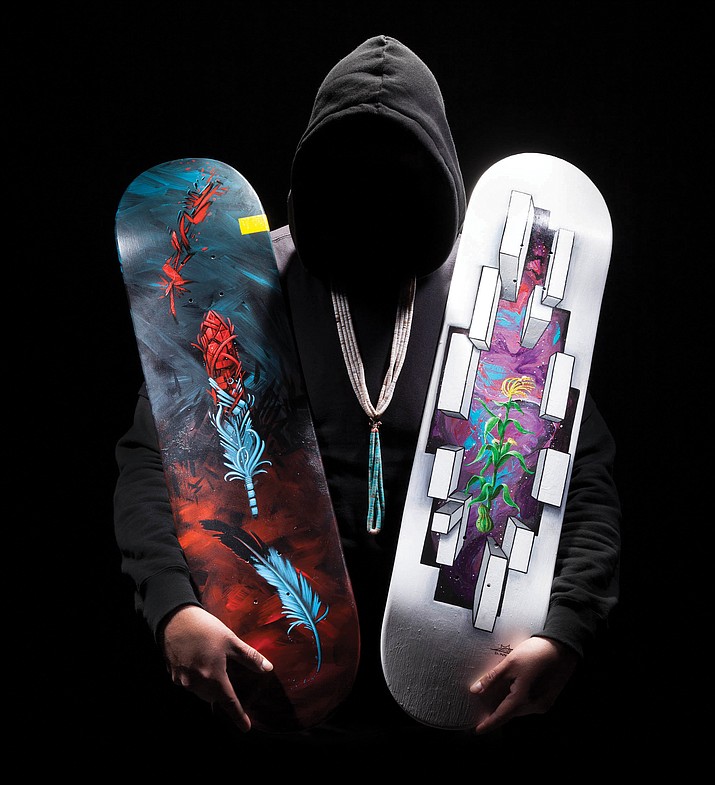 FLAGSTAFF, Ariz. -- Pivot: Skateboard Deck Art is a multicultural art exhibition with artists from different cities, upbringings and cultural traditions throwing down a marker of where artists of their generation are today, in this moment.

The exhibition opens to the public at the Museum of Northern Arizona in Flagstaff Oct. 13 and will remain open until March 31, 2019. The exhibition is sponsored by the Northern Arizona Regional Behavioral Health Authority. Thirty-two artists around the Southwest were given identical canvases and have created nearly 100 pieces of art based on their own cultural influences. The artists represent many backgrounds and cultures including Hopi, Navajo, Zuni, Comanche, O’odham and Latinx.

Artists will speak at the member’s preview Oct. 12 and also Oct. 13 when the show opens to the public.

Some of the boards are for sale, though a few are from private collections.

Landis Bahe and Duane Koyawena in front of the Museum of Northern Arizona where the Skateboard Deck Art exhibition will open Oct. 13. (Katherine Locke/NHO)

Guest curators Duane Koyawena and Landis Bahe explain that Pivot has a variety of meanings, as it relates to the show.

Bahe wants to encourage people who come to the Pivot show to try and keep an open mind when they come in because they will be seeing Native Americans express their traditions in new ways — whether inspiration from ancient baskets, pottery and weaving — the boards will show traditional and cultural elements in a contemporary graphic style.

Part of that is because the exhibition features tribes both on and off the Colorado Plateau, a place the museum usually focuses exclusively on.

“Here we’re going off the plateau, reaching out, but again, these other artists inspire me, the other artists inspire Landis and it’s just mutual,” Koyawena said. “I really like everybody’s art journey. We’ve all climbed our own mountains to get where we’re at. That’s what I like about it. And also to inspire all the youth, of course, but anybody who has any kind of talent out there, to show them that we’ve all been there and this is where it can be.”

“Today, with the color and everything look, contemporary backgrounds and then popping something traditional in it, that’s what I like to do for myself,” Koyawena said. “That’s what Pivot is about and art for itself…I feel like I am taking a lot of what I’ve learned, traditional stuff and pulling it into abstract backgrounds, designs and colors.”

There is even some collaboration with contemporary artists who are doing things that are “way out there,” Koyawena said. “Keeping the culture but bringing it into a contemporary display of art is what Pivot and art is about.”

Bahe explained Native artists reach back for traditional themes for their work, but they also live simultaneously in a contemporary world.

“You have this mesh of how we were brought up culturally and how we adapted to modern society,” Bahe said. “The moment that I believe we’re in right now as Native Americans and as people in time, here, it’s pretty pivotal.”

Part of that pivotal moment is recognition that the current generation of Native people is different from those who only lived on the reservation and were connected to their own language and culture in different ways that Native people who live in cities have.

“We work here, we earn education and we are evolving as Native Americans,” Bahe said. “But we’re still holding on and trying to keep the culture very strong. In this moment, we’re emerging and immersing ourselves into this society. I believe it is happening with my generation with people around my age.”

But Bahe said his children have a less significant cultural influence than he has had.

“Being Native American in this world right now is a beautiful thing but it is also challenging,” Bahe said. “We have to juggle different lives, in a certain way. What we do is we gather and we absorb everything we experience and dream and look at and think about and it comes out into our art.”

Koyawena wants to make sure youth know, even if you don’t live on the reservation, their cultures are still here.

“We want to show youth that we are still culturally intact,” Koyawena said.

Part of the point of the exhibition is to show that tribes that have become segregated — many from the influence of other cultures over coal, land or other things — experience many of the same things in their attempt to integrate with modern society. And historically, before the influence of outside interests, tribes were not segregated as many are now.

“Our people used to trade with other different types of people. Navajos, we used to trade with Hopis. And they spoke the language. Hopis spoke Navajo and some Hopi spoke Navajo. They’re integrating as well, there’s some marriage in there,” Bahe said. “What we’re doing… with Pivot, we’re practicing those good friendly ties that our ancestors had practiced. They traded corn and mutton and prayers and songs. We’re bringing that in this moment in what we know. And what we know is art.”

Koyawena said it was important to expand the exhibit beyond just Koyawena and Bahe because there are a lot of artists in their generation who have worked hard to get where they are and they both wanted to make sure those artists were included.

Koyawena said he speaks at schools where many of the kids draw and that is how he started, too. He said the challenge for him and other artists is how to continue climbing on the journey and separate their art from others’.

“A lot of us have started that same journey, ‘How is your art going to get up there?’” Koyawena said. “A lot of the artists we are bringing in have been down that same path.”

The goal is not about the money, Koyawena said. It is about the art and the journey to get where they are as artists.

“A lot of us have made this walk to where we’re at,” Koyawena said. “Getting down on a unique canvas is what it is. They’re all the same size, they’re all the same can vas. Seeing the talent put on this little area [is the point].”

Bahe describes the canvas of the skateboards as the skin, naked as everyone comes into the world.

“Every single artist starts there, with a blank board, as we do start in our lives,” he said. “Based on their influences, based on their lives, based on where they come from and how they gravitate or how they move their brush, whatever medium that they’re using, as soon as you see whatever image is on the board, that is… a piece of their identity.”

Pivot: getting knocked down and getting back up again

Pivoting Bahe explains, can be made by a proactive choice or by being dealt a knockout blow from life.

“Neither one is easy,” Bahe said. “We’re here to inspire other people who are like us who have dealt with… everyone deals with that left hook of life. But you take those pivotal moments of your life and you make them blossom, bring the beauty out of it and move forward.”

Koyawena and Bahe have had a hand in everything to do with this exhibit including what the walls will look like. They played around with the idea of having words of inspiration or positive messages in different Native languages up.

“We were thinking about it and I was like why don’t we just start throwing down on the walls,” Koyawena said. “I feel like the symbols we are putting up are pretty universal for all tribes.”

Bahe compares it to speaking in the universal language of art, but not like English or any language. Bahe said the symbols on the wall are very easy to communicate and easy to receive as a visual.

“I really have to hand it to Duane, too, with the room, because, man, that room is beautiful. The gallery itself is beautiful,” Bahe said. “Duane is over here really getting down.”

Bahe said a lot of his inspiration comes from Koyawena but also from his friend Bahe Whitethorne Jr., who passed away unexpectedly in late March. And that is what he means by pivot — that Native people are in a time right now where they are losing what they are supposed to be practicing as Native for the Earth.

“We’re trying to keep balance. You’re going to get hit with things. That pivotal moment and you have to make a decision within your own self,” Bahe said. “Like Duane advised me once, is this wave of life going to take me down and pull me into the undercurrent or am I going to sit there and take that wave and enjoy it and wait for the sun to shine again. This show has been, for myself, has been a really pivotal moment for me in my own life.”

Pivot: lifting communities and cultures up

Bahe and Koyawena want to inspire youth who go through the same things they have and struggled with some of the same issues.

“The big inspiration that drives me is all these kids, these young kids, they do art,” Koyawena said. “Some of them have addiction problems or have problems in life and this is the outlet. Showing them you can take a blank deck, something so blank and plain, and transform it into something very beautiful and very nice.”

Whether it is taking his 13-year-old nephew back to Hopi or showing him how artists live and what they do to survive, with jobs, bills, school, whatever they are trying to aim for, Koyawena sees the importance of pivotal moments for himself, too, with moving forward and setting a positive example.

“He (Koyawena’s nephew) knows about my addiction and my struggle and I mean all of us have some kind of story to share of that nature,” he said. “That’s another part of the inspiration, just the art. That is a big thing for me with this exhibition. Definitely those pivotal moments. Like Landis said, losing our brother Bahe, those things are thrown at us. How do we take that, what do we do with it?”

The exhibition, Pivot: Skateboard Deck Art is one answer. It’s a celebration of Native art that both Koyawena and Bahe are inspired by and it is at its essence, a celebration of art and cultures.

The biggest thing that both Koyawena and Bahe know is that they could not do their art alone. Their families, those who are here and those who are gone, were all influences and they want to thank them and the staff at the Museum of Northern Arizona Samantha Burton and Cindy DeAngelis for their help in making the show a reality.

“We want to thank everyone who stood by us. We couldn’t have done this without them,” Bahe said. “We love them.”

“I really would like to represent our Hopi Tribe in a good manner and also be a positive role model for our people,” Koyawena said. “People creating their journey with their talents, my nieces and nephews and mostly my daughter Peyton Koyawena.

“If this thing turned into an annual thing, we would be able to cycle so many people, artists,” Koyawena said. “It would be a really cool event. It would be non-stop.”