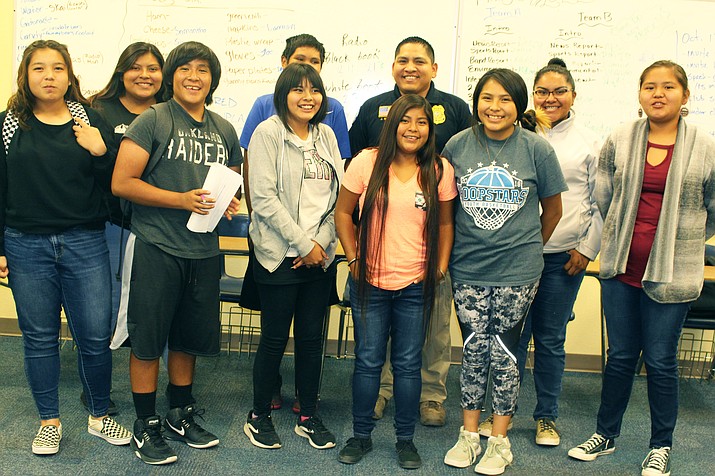 Hopi High AVID class surrounds K-9 officer Jared Shupla as he shares about his role in law enforcement and some of the challenges faced by the Hopi Tribe. (Stan Bindell/NHO)

POLACCA, Ariz. — Jared Shupla, one of the eight Native American K-9 officers in America, recently spoke to a Hopi High AVID and Hopi Junior High radio class about his work.

K-9 officers are those who work with specially trained police dogs.

Shupla said the Hopi Tribe is working on a big milestone. The Navajo Tribe has already used a 638 contract to make its police department self-sufficient from the BIA and run the department itself.

“The Hopi Tribe has filed a proposal to go 638. This means that the Hopi Rangers could take over. This is a huge milestone,” he said.

“It’s a good career path,” he said. “But not everyone passes (the police academy). It’s not for everybody. Some have problems with either the academic, physical or pscyhological. It takes a special person because you see some things that stay with you for life.”

Shupla said his military training prepared him for the police work.

Shupla said the Hopi Reservation has a huge problem with meth. He said when he was in high school there were only problems with alcohol and marijuana, but now there is an epidemic with meth.

“You have a bigger responsiblity to stay in school,” he said.

Shupla told the students that their time in school is short and they need to make the most of it.

“I never thought I would be here advising you because I was a rough student,” he said.

Shupla briefly worked as a security guard at Casino 66 on the Pueblo Laguna Reservation in New Mexico. He said students can find work doing whatever they like.

“If you’re flipping burgers for a living that’s better than just staying at home,” he said.

Shupla said one good project for the students would be to interview someone who is in the career they are contemplating going into.

Shupla said some people don’t understand why victims of domestic violence don’t leave their situation. He said a lot of the victims are afraid of leaving the abuser thinking the abuser will end their life or hurt their family members.

Shupla said abusers will often pull knives or other weapons when police are called to domestic violence situations. He told the students that if someone is abusing them that that person is not for them.

Shupla said drugs are the reason for many burglaries. He said one man in the Tuba City area is known as “Walmart” because of all the items he sells that he has stolen so he could buy more meth.

“He is driven by his next fix,” he said.

Shupla, who works for the BIA Office of Justice Services, can be detailed to any reservation any place in the country at any time and sometimes has been detailed to other reservations, although right now he is based out of the Hopi Reservation. He began working as an officer in March of 2016.

He doesn’t regret it as he said he loves coming to work every day.

He has been detailed to Pueblo Acoma and Pueblo Santa Clara, both in New Mexico.

Shupla told the students regardless of what they have been through that they need to be thinking about what they will do after they graduate from high school.

Born and raised in Polacca, Shupla graduated from Hopi High School in 2002 and shortly after went off for 18 weeks of training in Missouri to become a Military Police (MP). That was his job for the next eight years including two tours in Iraq. His jobs included everything from patrol supervisor to traffic investigator.

“The military is easy and a great way to pay for college,” he said.