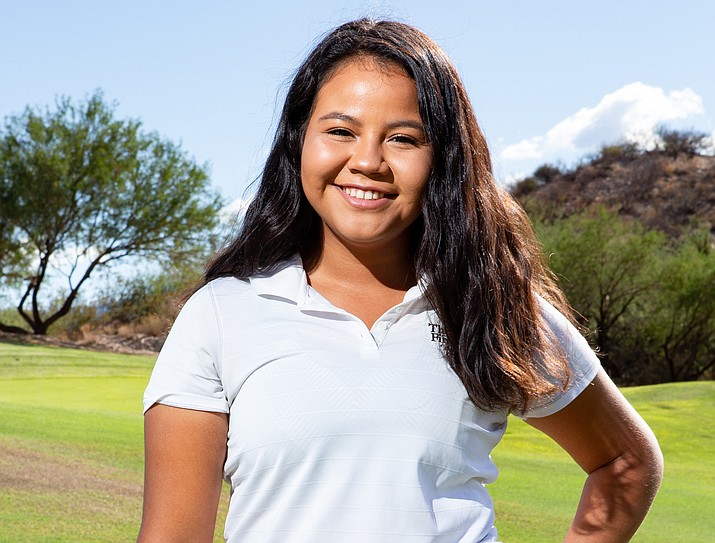 The kids selected were able to play with a PGA Tour player from the Champions Division. The event was televised on the Golf Channel.

Harvey is 17 and a senior at Cave Creek Shadows High School. She was born in Tucson and lived there until she was five. She has lived in Phoenix since then.

Harvey said when she was eight years old her father took her to the Waste Management Phoenix open for the first time and that is where they came upon a booth called The First Tee of Phoenix.

The First Tee of Phoenix is a nonprofit organization made possible by The Thunderbirds that teaches the life skills of honesty, integrity, sportsmanship and respect through the game of golf to young people who would not otherwise be able to have affordable access to the game.

“Ever since then, I have been a part of the First Tee of Phoenix and that is how I started,” Harvey said.

Harvey has been playing golf for almost 10 years. She spends one to three hours, five times out of the week practicing.

First Harvey had to be selected, then she filled out an application that was sent to The First Tee headquarters where each applicant is placed on a grading system with the other applicants. Harvey estimates that there were 300 applicants.

Eighty young golfers were chosen from First Tee of Phoenix and four from Taylor’s chapter.

“Me and three other of my best friends, we all got chosen,” Harvey said. “We were some of the top people who got picked in the selection process. I am one of the only Natives that got picked for this, not a lot of Native kids play golf.”

Kevin Terry, executive director of First Tee of Phoenix, said that they were only the second chapter to have four students selected in a single year.

Terry said that Harvey excels in their chapter.

“She is one of our superstar members,” Terry said. “ACE class member (highest level) and consistently participates in our member tournaments and events. [We are] very very proud of her. She represents our nine core values in a first class manner.”

“I think it’s really cool and I hope it encourages other Native kids to get involved in a sport that not a lot of people play in and hopefully be a guide, in a sense,” Harvey said. “Helping other kids know that you can play a sport that’s not very Native-orientated.”

Harvey said she has not experienced any issues from being the only Native person she encounters on the golf range.

“I don’t think I necessarily do,” she said. “I just think it may be harder for Natives to get out there. I think a lot of people just look at you kinda weirdly when you’re on the course and they are like, ‘What is this brown girl doing at the country club?’ But, I think it’s definitely been eye opening and it just shows that there’s more people who can play golf than you think.”

Harvey is not sure she wants to become a professional golfer. But she always wants to be close around golf.

“Andy Harvey really painted a picture for me being one of the only Natives to do broadcasting and I want to be one of those Native voices that talks about golf, talks about how it helps in everyday life,” Harvey said. “How First Tee really paints a picture of what a role model, or how you can develop personality traits that will carry you throughout life.”

Harvey said that golf is a great way to network and connect with other people that can help out in the future.

“It just really is a gateway to a bright future,” she said. “Opportunities like this don’t come around very often so if you want to be a part of something big, golf is definitely like a good way of not only having something fun to do, but also building your character and relationships, as well.”