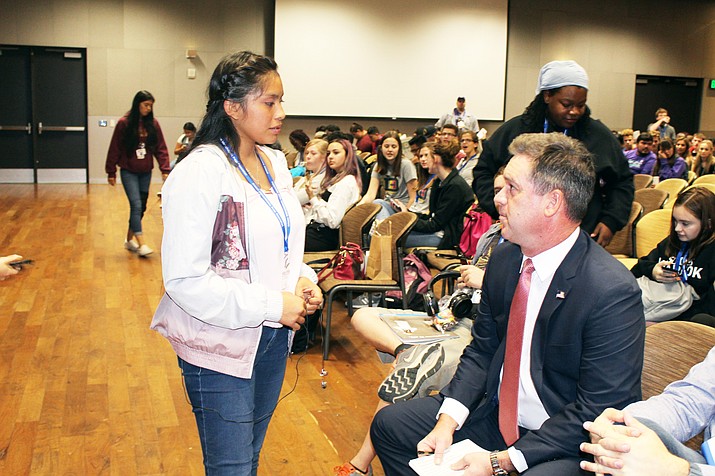 TEMPE, Ariz. — Steve Irvin, longtime newscaster and anchor on Channel 15, told journalism students that journalism is an important part of democracy. Irvin served as the keynote speaker Nov. 6 at the Arizona Interscholastic Press Association Conference at ASU in Tempe.

Irvin said while voting is up 200 percent for voters in the 18-34 age group, voters in the 65-74 year old age group still vote in much larger numbers than younger people.

“They are deciding your future and they will not be here to see it,” he said. “The votes you cast today will impact you 15-20 years from now.”

“Schools are falling apart, teachers are leaving the state and we need to change that,” he said.

Irvin said while journalists should be unbiased sometimes they have to take a stand. For example, he said for the first time in 30 years he put out an opinion piece that Arizona schools were in crisis and that it was wrong.

“Some said that was not my job. Some did not like it,” he said.

Irvin quoted a Minnesota journalist who said “If you have credibility, then you have to spend some of it.”

“Your goal is to get the truth,” he said. “If one side is lying you do not have to give them equal time.”

Irvin said he hopes his legacy is one of speaking up when he needed to do so.

“Trust in the press is at an all-time low,” he said. “Some will demean you for what you do.”

Irvin referred to President Donald Trump referring to the press as the enemy. Thus, he said the free press is in grave danger.

“This is a battle for democracy,” he said.

Irvin said the late U.S. Sen. John McCain spoke about doing something that is ‘bigger than you’ and he feels that journalism fills that definition.

He said one of the best journalism schools in the country is the ASU Cronkite School of Journalism. He spoke about how newsman Walter Cronkite, who the school is named after, used to end his broadcast with ‘And that’s the way it is.’

This was Cronkite’s way of telling Americans that he was giving them the truth.

Irvin spoke of the importance of the First Amendment because it provides freedom of speech, freedom of worship and freedom of the press. He said this is rare in the world because many dictators do not allow their people these freedoms. He said 28 journalists were murdered in the past year because of what they said or wrote.

“Can it happen in this country?” he asked.

Irvin pointed out that a pipe bomb was recently sent to CNN. While it didn’t go off, he believes this shows the dangers that journalists face. He said Trump has threatened to have journalists arrested.

“Imagine someone else saying what you can know,” he said.

Irvin said he has been threatened twice in the last couple years. Once by a Trump supporter who told him “I want to Second Amendment you.” The second time someone threatened him and his son. He said journalists have to do their job with determination and resolve.

Irvin told the journalism students that the quality and integrity of their work will decide their future. He said journalists provide a public service by letting people know what’s going on.

Irvin said students have more access to information today through the Internet, but that a lot of it is “a big pile of crap.” He said the Internet also gives everybody the right to publish, but they aren’t necessarily printing the truth.

There is also the fact that journalists do not make much money and have to work holidays and weekends. Journalists are also often on the road.

“Your job is your life and your life is your job,” he said. “But it is one of democracys essential institutions.”

Irvin has covered stories in many parts of the world including when American troops were in Bosnia. He has also covered many stories in the heat including McCain’s funeral. He has covered everything from political conventions to a terrorist attack at the Pentagon.

“You haven’t succeeded if you haven’t failed,” he said.

Kimmale Anderson, who interviewed Irvin for the Hopi High video class, said Irvin did a comical job of talking about journalism, but showed that he was passionate about his job and expressed why journalism students should go into the field. She said that Irvin urged the students to think big and take risks.

Anderson, a junior, said she liked Irvin’s message that people need to be informed in order to have a voice.

“He was quieter during our interview than he was on stage, but he gave good answers and he was impressed with how far we came,” she said. “He told us to keep doing what we’re doing because being out here we are in a rural area and this is our way of getting our voice out. Our way of informing the world that we are here.”

Tysha Jim, another Hopi High video student, said Irvin was inspirational because of the way he talked about his adventures and the way journalism is fun.

Katreese Lomayaktewa, a print journalism student at Hopi High, said Irvin’s speech was good because he gave a lot of information and encouraged the students to keep working in journalism.

“He was so well prepared and he spoke about journalism’s importance to democracy. He proved his point that the more information you have that the better off you are,” he said.

Mark Lodato, associate dean of the Cronkite School of Journalism and Mass Communication at ASU and one of the speakers, also said society cannot have democracy without a free press.

“Explore different avenues for your passion,” he said.

Lodato said ASU’s journalism college is one of the top five in the country.

“Look at where your passion is and how to take it to the next level,” he said.

Isadore Anzures, a video student at Hopi High, said Lodato was cool because he gave a lot of information and answered questions professionally.

“He is dedicated to journalism and inspired me to apply to ASU’s summer media camp,” she said.

Lanasha Puati, who has a radio talk show called Native Health on Radio Phoenix and serves as communications assistant at Native Health, spoke during one of many breakout sessions at the AIPA Conference.

Puati told the students that her radio shows deals with everything from health to fashion to art to music. Mostly Puati’s radio show deals with urban Native Americans in a positive way.

Anzures, the video student, said Puati was cool because she explained everything about her radio program.

“She knew she what she was talking about,” Jim said.