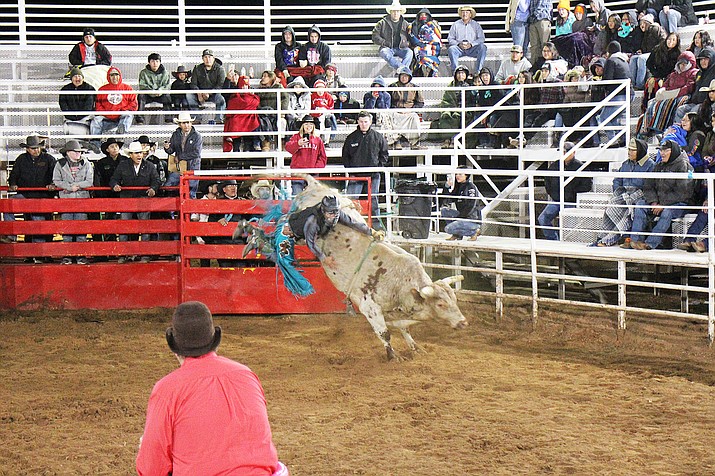 PAGE, Ariz. — The 18th annual Kenny Young’s Bull Riding Classic Nov. 9-11 at the Kenny and Emily Young (K.E.Y.) family ranch held a special significance when it was rescheduled to honor the memory of Kenny Young Jr. on what would have been his 42nd birthday, Nov. 10.

Since his passing June 10, 2018, his father and mother, Kenny and Emily Young, knew he would have wanted the show to go on and so it did.

The Bull Riding Classic is famously known for the ‘old school’, one chance ride off, which attracts bull riders from all over the country. On average, up to 20 riders get a chance to score in the top 10 to vie for over $10,000 in payouts if they qualify for the main event — the shoot-out n which the top six riders get a piece of the prize and bragging rights for riding some of the toughest bulls in the circuit.

The vibe was electric and charged with adrenaline as the crowd had front row seats and a large 20-foot television screen that highlighted the rides in real time. Spectators, family and friends were all on the edge of their seats praying their favorite rider would make the eight second buzzer without harm.

In a whir of horns and hooves, partnered with hats and colorful chaps, one never knew what would happen next, a great ride or a cowboy flying through the air. The Classic promised both and delivered. The rodeo clowns stole the show distracting the revved up bulls and the clowns did so hyper-bravery and skill.

Midway through the event the Young family and guests took a moment to remember Kenny Jr. with a montage of his life. Emily became emotional but the Youngs are known for being very family-oriented. The Young family stood together to watch the memorial video. Kenny Jr.’s animals were brought to the arena to honor his love of the cowboy way of life and the animals, a moment of silence was observed.

“(Watching the video) I was thinking of all the good times we had together with him and enjoying him throughout his rodeo life. He was a good man, he was definitely here in spirit and I know he really enjoyed what he saw here because I did,” said his mother, Emily Young, about her son, who was also known for his dedication to the community and always having a kind word for people when they needed it.

The Shoot-out was next and the riders drew from the best and toughest bulls in the K/L Bucking Bulls corral. Six of the 10 bulls had been used for the Indian National Finals Rodeo in Las Vegas this year, which meant the bulls had to defend their reputations. During the prepping of the chutes, the bulls’ energy made them buck and shake the chutes trying to intimidate anybody near.

The first rider in the 10 chute, Charles Benson, drew the biggest and toughest bull, Hilton Hotel, an INFR heavy hitter. No score and no time for Benson, Hilton Hotel won that round and Benson’s overall score was 73.

In chute nine, Skylar Ott drew Major Cha Ching, another INFR superstar. Ott had an overall qualifier score of 73. He rode Major Cha Ching for a couple seconds but not enough to score.

In the eighth chute, Aaron Clark drew Toby and was able to stay on a few seconds but with no score. Clark had an overall score of 75.5.

The seventh chute rider, Tyson Tsinigini, drew Dancing Water, also an INFR bull. He was bucked off with no score but went home with an overall score of 77 points.

The next rider in the sixth chute, Wyatt Nez, drew a heavy hitter INFR bull from the stock bred at the K/L Ranch. Ice Pick has a reputation for success, which remained unbroken when Nez was thrown immediately. The rodeo clowns were in top form when Ice Pick went for Nez. Nez went home with the sixth place payout with an overall score of 79 points.

In the fifth chute, Andy Sells drew Little Big Man and was able to ride him for the full eight seconds with a score of 82.5, which qualified him for the second place spot payout. He also scored 80.5 in the qualifier round.

Wyatt Betoney in the third chute, drew Antelope Canyon and was unable to score when he was thrown. Betoney walked away with the fifth place payout with an overall qualifier score of 153.5.

The second chute rider, Tustin Daye drew the famous Professional Bull Riders (PBR) and INFR bull, Kenny’s Homeboy. Kenney’s Homeboy had high adrenalin and everything the K/L Bucking Bulls ranch promises. What sets Kenny’s Homeboy from the rest of the stock is having no horns for a rider to contend with, so, spinning non-stop and bucking wildly is the style of this bull. Daye had a slim chance to ride Kenny’s Homeboy with success but Daye was unable to stay on the whole eight seconds and was thrown. Daye had an overall score qualifier score of 155 points and went home with the fourth place payout and bragging rights for riding a great bull.

The first chute rider, Troy Tuni, took first place in the winner take all ride. Tuni drew INFR bull, Rebel Yell. Rebel Yell has a long reputation for bucking riders almost immediately and was already bucking in the chute. Once Tuni gave the signal he rode Rebel Yell with text book perfection for the full eight seconds. Tuni jumped off and then Rebel Yell turned his horns to him, but the rodeo clowns were able to guide the bull back to the corral. Tuni gained an impressive 87 points for the win with an overall 161.5 qualifier score. Tuni, 19 years old from Round Rock, wins in his fourth year at the Classic and will return next season to defend his title.

Kenny Sr. said the bulls at the K/L Ranch are born with the talent.

“They already know how to buck and they do their job and we just feed them good and take care of them. Kenny’s Homeboy did show out. He is a PBR bull,” Kenny Sr. said.

“We take care of them like they are our own kids,” Emily added.

The 18th Annual Kenny Young’s Bull Riding Classic was high energy in a small arena that brings back old rodeo traditions and a strong feeling of community. Ray Champ as the Master of Ceremony with former bull rider now world championship hoop dancer, Tomas Hunt, and great food made the Classic one of the best bull riding event in the area.

The Classic is an annual event and will return next year as stated in Kenny Jr.’s memorial message, “The show must go on.”