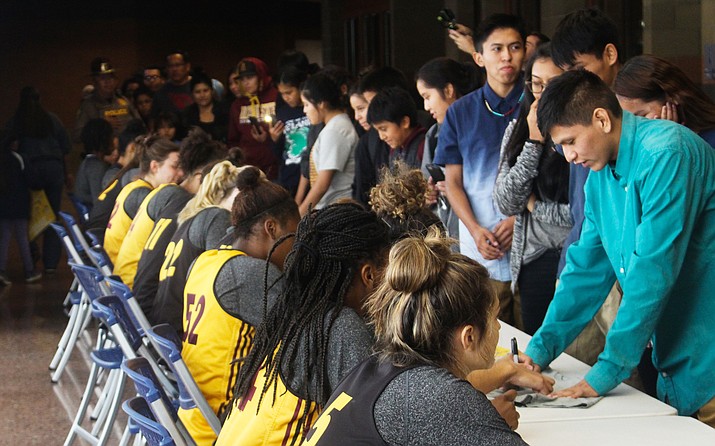 Several thousand fans on the Navajo Reservation lined up for autographs when the Arizona State women’s basketball team visited Fort Defiance to play a basketball game against Baylor. (Photo by Sam Ficarro/Cronkite News)

FORT DEFIANCE, Ariz. — For many on the Navajo Reservation, basketball means everything.

The houses in this small northeast Arizona community on the New Mexico border feature a diversity of basketball hoops. White. Black. Gray. Some have rims with no net, others have rims with only part of a net hanging from them. Many are attached above garages, like anywhere else in the country. Some simply protrude from the top of a black metal bar.

All are well-worn. They are symbols of hope for the Navajo people.

“I was told if there’s a basketball hoop, you can just basically play anywhere, and that’s how it is on the Rez,” said Payton Charley, a junior on the girls team at Window Rock High School. “There’s dirt, they still play. If it’s like really muddy, and it’s uneven, they still play. We just have so much love for the game here.”

The Arizona State women’s basketball team saw that firsthand when the team traveled to Fort Defiance recently to play a game on the Navajo Reservation against Baylor. The goal was to honor Native American culture and recognize the tribe’s Vietnam Veterans.

But the Sun Devils also came away with a greater knowledge of the strong relationship between their sport and the Navajo community. It was a beneficial visit for both sides.

“I think this has been a really amazing educational experience for them because we have some kids who have Native American blood, of course. But not anybody that’s full Native and knows their clan or tribe, none who grew up on a reservation,” ASU coach Charli Turner Thorne said. “This is about learning everything they’ve had a chance to learn about, both the serious issues of reservation life and also the things to celebrate.”

The Navajo Reservation consists of many clans, but they all share a love and passion for the game of basketball. Rez ball, as they call it.

The run-and-gun, fast-pace style of play is popular with fans. A slow, possession-style of basketball doesn’t exist on the reservation.

Charley was one of many Navajo kids awestruck to see one of the state’s major college programs playing in their community.

“It inspires me,” Charley said. “The school is kind of small, and to have ASU here, it inspires me to go bigger, dream bigger and to have that mindset that wherever you live, you can always achieve more than you think.”

The love for basketball runs deep on the Rez.

And young native players need only look at their own history for the kind of inspiration Charley mentioned. Ryneldi Becenti, who was in attendance at the “Showdown on the Rez” game, played at Window Rock High and went on to play at Arizona State and to become the first native player in WNBA history.

“Being on the court makes me happy, even if it’s just playing around or taking it seriously,” said Charley, who added that basketball connects her and others to their community.

Dangelo Cadman, who has played for five years and is on the team at his community college, said the game is “just really fun – something to get the mind off stuff whether I’m feeling down or something.”

Despite wearing an Arizona Wildcats shirt, Cadman said he was pulling for ASU.

After a 90-minute practice with spectators looking on, the Sun Devils went up to the main concourse of the Bee Holdzil Fighting Scouts Events Center, the school’s gym, and began signing posters.

The autograph session was only supposed to last about 30 minutes, but due to several thousand people lined up to meet the Sun Devils, the team stayed for 45 minutes. At the end of the table, two stacks of posters disappeared as fans made their way through the line.

Before walking through the autograph session, Charley pondered what she was going to say to the players.

“I’m going to ask what it took for them to make it all the way to college ball and how they succeeded,” she said.

Following the autograph session, Arizona State went back into the locker room where Peterson Zah, former chairman and president of the Navajo Nation, spoke to the team about the event and the history of the Navajo people.

“I don’t think you have a good idea as to the impact you’re going to have on our kids because they never saw a game, many of them, as close as they’ll be seeing you play,” Zah told the Sun Devils. “Many of them will watch on television a game of basketball, but … it’s a different experience to actually see people on their own land and their own gymnasium.”

Zah thanked Turner Thorne for her willingness to take a home game to Navajo land.

“We are very grateful to the great coach,” Zah said. “It’s one of those things where a person really understands on a larger scale what we’re all about. People who are that way (are) really hard to find. And then at the same time, they’re into their profession 100 percent. For me, that coach here represents that train of thought.”

Zah, an Arizona State women’s basketball season-ticket holder, told the team that he makes the 600-mile round trip to go to home games in Tempe, traveling to the Valley on game day and returning the day after.

“I want to thank the coach and the school for doing what you’re doing here because we all can not accurately predict what all this means,” Zah said. “It means a lot to the 80,000 Navajo kids who are school-aged. I want to thank you for agreeing to come. Enjoy the game, make it a lot of fun, and just play hard.”