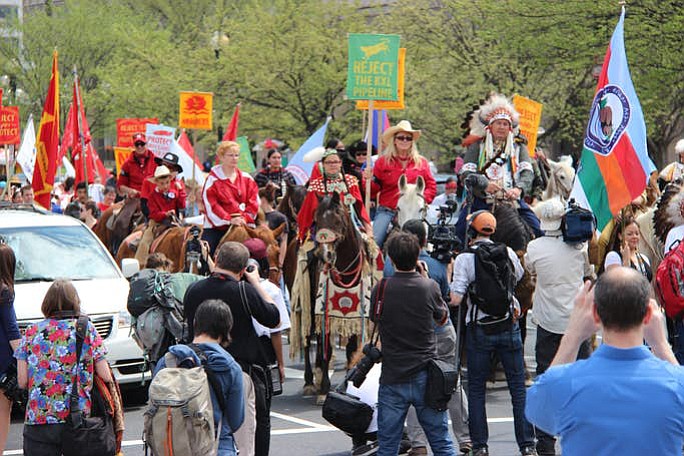 Members of the Cowboy and Indian Alliance rode on horseback and protested in unison against the Keystone XL Pipeline. (Vincent Schilling)

President Barack Obama rejected the $8 billion project in late 2015, but President Trump reversed that decision in March 2017, and the State Department granted TransCanada a permit for construction.

But after the latest decision in Montana, the Keystone XL Pipeline — a 1,200-mile long pipeline that would connect Canada’s tar sands crude oil with refineries on the Texas Gulf Coast, with emphasis on the major coast’s ability to serve as a port for world exports — is now in another state of limbo.

The decision, made by Judge Brian Morris of the U.S. District Court for the District of Montana, does not permanently block the permit. However, the Trump administration must review potential adverse impacts related to climate change, cultural resources and endangered species. Considering the dismissal of evidence asserted by the administration, the reversal of the decision by Morris is an uphill battle.

According to the court order by Morris, the US government’s use of a 2014 environmental review to justify the presidential permit, violated the National Environmental Policy Act, the Endangered Species Act and the Administrative Procedure Act.

In short, work must stop.

“The Court enjoins Federal Defendants and TransCanada from engaging in any activity in furtherance of the construction or operation of Keystone and associated facilities,” say court documents, “until the Department has completed a supplement to the 2014 SEIS (Supplemental Environmental Impact Statement) that complies with the requirements of NEPA and the APA.”

Morris cited the Trump Administration disregarded facts about “climate-related impacts” and that the State Department “simply discarded prior factual findings related to climate change to support its course reversal.”

Morris also cited that the State Department failed to “analyze the cumulative greenhouse gas emissions,” and acted on incomplete information regarding the potential damage to Indian territories and that the department failed to issue a fact-based decision that supported the order to approve the pipeline.

Jackie Prange, senior attorney with the Natural Resources Defense Council, told the Washington Post, “It’s emblematic of what we’re seeing with the Trump administration, which is a very fast and sloppy reversal of prior decisions … in a way that doesn’t adhere to the rule of law,” Prange told The Post. “That’s why we keep winning in the court.”

The Indigenous Environmental Network, one of the plaintiffs in the case alongside the North Coast River Alliance and the Northern Plains Resource Council, took to social media shortly after the decision was made Thursday.

They also posted a statement from several of the organizations leaders on their Indigenous Rising website as well as naming the five-points cited by Morris that led to a decision in the plaintiffs favor.

Judge Morris ruled that approval of the KXL Pipeline violated the National Environmental Policy Act (NEPA), and the Administrative Procedure Act because:

Failed to conduct an adequate survey of Native American cultural resources that would be harmed by the pipeline.

Failed to provide adequate modeling of potential oil spills and their impacts on water resources.

Failed to analyze the cumulative effects of this project on greenhouse gas emissions.

Failed to address the effects of current oil prices on the viability of the project.

The following quotes are from members of the Indigenous Environmental Network:

“This is a win for Lakota, the Oceti Sakowin and other Tribal Nations, for the water, and for the sacredness of Mother Earth. This decision vindicates what we have been saying all along: Trump’s approval of this pipeline was illegal, violated environmental laws and was based upon fake facts. Our legal fight has been for the benefit of all life along the proposed route of this Canadian tar sands pipeline. This pipeline is the enemy of the people and life as we know it. It must be stopped. We will continue our prayers to take action to fight the Trump administration in defense of the sacred, to protect Indigenous rights, to defend our treaty territories and to advocate for the continuation of the next seven generations of life on Mother Earth free from fossil fuels.”

“We have fought this pipeline tooth and nail and it’s a great affirmation to hear this judge agree with us. President Trump’s permit was utterly illegal and against the proper procedure. For our people, it has always been a matter of no: No Consent, No Pipeline. We will continue to fight for our sovereignty as nations, our cultural and historic sites, for the safety of our people from man camps and for the sacred medicine that is the water. We will fight and we will win.”

“One of Trump’s first presidential acts was to approve the Dakota Access pipeline, subsequently inflicting violence upon our peaceful people. So I am happy to see that Trump is being checked, that his approval of Keystone XL is being reversed and that he will have to reevaluate the effects of this pipeline on the land and culturally significant sites. it’s incredible. From the open prairies to the courtrooms, our ancestors and sacred sites are protecting us.”