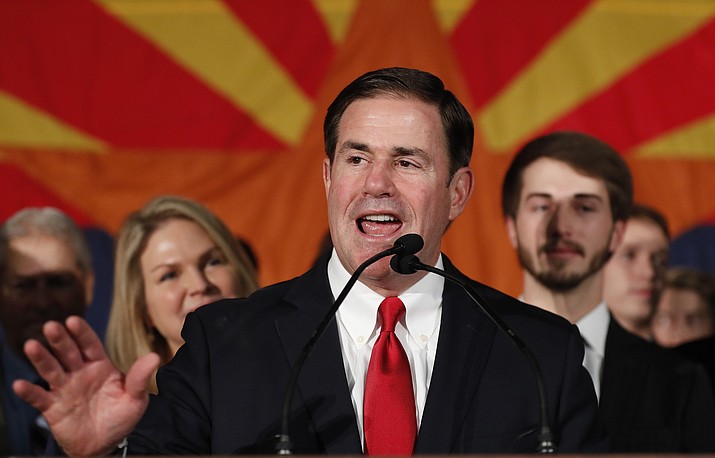 PHOENIX (AP) — Arizona Gov. Doug Ducey was re-elected Nov. 6 to a second term in a Republican sweep of many statewide offices, beating Democrat underdog and education professor David Garcia in a race that focused on border security and education.

"If you voted for me, thank you," Ducey told supporters at his victory party in Scottsdale. "If you didn't, I want you to know that I work for you. My goal these past four years is to be a governor for all the people, without regard for party affiliation."

Ducey attacked his challenger, Democrat education professor David Garcia, as a radical liberal who was weak on border issues and intent on raising taxes. Garcia slammed Ducey for "half measures and broken promises" to improve public education.

The debate during their campaigns "could not have been more spirited," Ducey said after he won.

After he conceded defeat, Garcia told his supporters that "we didn't cross the finish line this time, but people-driven change is coming to Arizona."

The Arizona State University professor reiterated that a walkout by public school teachers earlier this year powered his campaign and encouraged supporters to keep up the fight.

In other statewide races, Republican Attorney General Mark Brnovich won his re-election bid against Democrat January Contreras, a former county and state prosecutor and the GOP's Kimberly Yee won the job as state treasurer. Arizona voters were also deciding on races for secretary of state, school superintendent and two utility regulator posts. All statewide seats are currently held by Republicans, but Democrats hoped to win one or two for the first time in a decade.

Ducey, the Republican Governors Association and other backers spent more than $15 million for advertisements attacking Garcia as weak on border issues. They asserted he wanted to abolish the federal Immigration and Customs Enforcement agency — a claim denied by Garcia, who called for more humane treatment of immigrants, especially children.

The ads trumpeted Ducey's economic and border security accomplishments in Arizona, which has a 30 percent Latino population and some of the toughest state laws in the nation that target migrants in the U.S. illegally.

Ducey said he inherited a state with a $1 billion deficit and balanced the state budget without raising taxes and that he simplified the state tax code and cut regulations to generate jobs.

Education was a key gubernatorial race issue after an unprecedented statewide teacher strike in the spring shut down public schools for nearly a week as instructors demanded more funding. The teachers returned to class after Ducey signed a plan that granted pay raises that will reach 20 percent by 2020, including a 1 percent boost granted during the past budget year. The plan did not meet teacher demands for more money for school improvements and raises for other school employees.

Despite his re-election, voters soundly rejected Ducey's initiative approved by the Legislature in 2017 that would have greatly expanded the state's private school voucher program. Public school advocates had used a provision in Arizona's constitution and gathered enough signatures to temporarily block the law and place it on Tuesday's ballot.

Bruce and Diana Husband, both 64-year-old retirees from Flagstaff, said they voted for Ducey and the rest of the Republican ticket because they wanted to ensure the U.S. isn't deadlocked over issues such as taxes, health care and immigration.

Bruce Husband said it would be unfair to let the caravan of asylum-seeking Central Americans into the U.S. while others apply through proper channels.

"My heart goes out to them, but we can't be the bleeding heart for the world," he said.

Polls showed the cash-strapped Garcia lagging in the race as the election neared, even though he was a strong supporter of the teacher's strike and said he wanted to increase state education funding, calling Ducey's education efforts "half measures and broken promises."

By mid-October, Garcia had raised only $2 million for his campaign, mostly in small individual contributions averaging about $50.

Ducey, who was born and raised in Toledo, Ohio, moved to Arizona to attend Arizona State University. Before entering politics, he was a businessman who led the Cold Stone Creamery ice cream parlor chain. He was elected state treasurer in 2010 and won the governor's race in 2014.