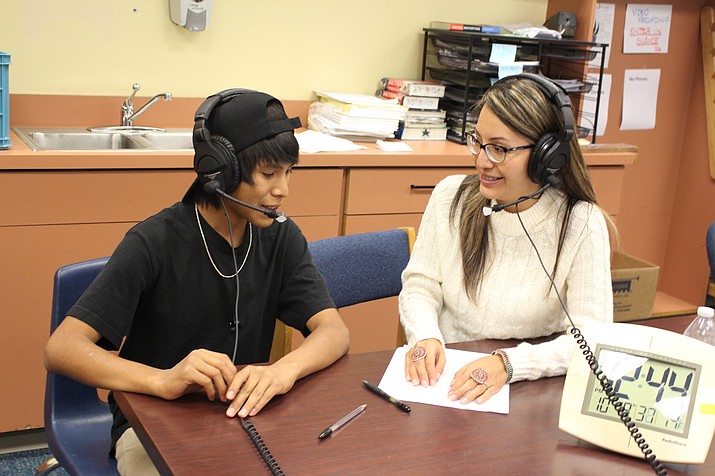 POLACCA, Ariz. — Latoya Largo hopes to bring more funding to Hopi Jr/Sr High School (HJSHS) so more programs can get more funding. As the director of federal programs, that is Largo’s job.

“The pressure is on to bring in more money,” she said.

Largo said federal, state and tribal budget cuts don’t help school budgets. She not only plans on writing grants, but wants to cross-train other staff on how to write grants.

Largo is familiar with science grants after working the last two and one-half years at Navajo Technical University in Chinle as the dual credit coordinator.

Largo has a deep appreciation for culture so she wants to bring more funding in for cultural programs whether it’s for language, history, dances or the arts.

“I love history, language, arts, jewelry, dancing and songs. They are beautiful, not just from my own culture or Native American culture, but globally,” she said.

One of her hopes is to go to Australia to study Aborigines.

“I love different types of cultures,” she said.

Largo, who comes from Teesto, said some stories from elders say that her clan comes from Hopi. She is Tobacco Red Running Into the Water Clan and born for the Bitter Water Clan.

Largo said she wanted to come to Hopi High School because it takes her out of her comfort zone since she has spent her working career on the Navajo Reservation.

“This pushes a lot of my boundaries because I’ve mostly lived and worked on Navajo,” she said.

Largo said the language and the landscape is different on Hopi. Largo, who speaks fluent Navajo, is slowly learning Hopi.

“This is a good change for me,” she said.

On the Navajo reservation, she could see the Chuska Mountains and Black Mesa. Now, on Hopi land, she can see the San Francisco Peaks. She said it also takes more time for the sun to come up on Hopi land.

“It’s interesting how much a geographic area plays a part in our lives,” she said.

Largo ran cross country in high school and remembers coming to a meet at Hopi High School where the weather appeared warm, but it started snowing part way through the race.

“I got sick after that,” she said.

Largo was able to run a six minute mile, but has cut back on running while she pursues her doctorate degree in education at NAU.

One of Largo’s other tasks at HJSHS is working with the Parent Advisory Committee. While Largo will attend her first PAC meeting later this month, she has already spoken with several parents on the telephone. She said parents should know that she is understanding, trustworthy, reliable and easy to communicate with.

Born in Gallup, Largo was raised in Many Farms and graduated from Chinle High School before earning degrees from Dineh College in Tsaile and her Master’s in educational leadership from Northern Arizona University in Flagstaff. She may become a principal in the future. She said several administrators have offered to train her to become a principal.

She previously worked as a substitute teacher at Chinle Unified School District and had her teacher training at Many Farms Community School.