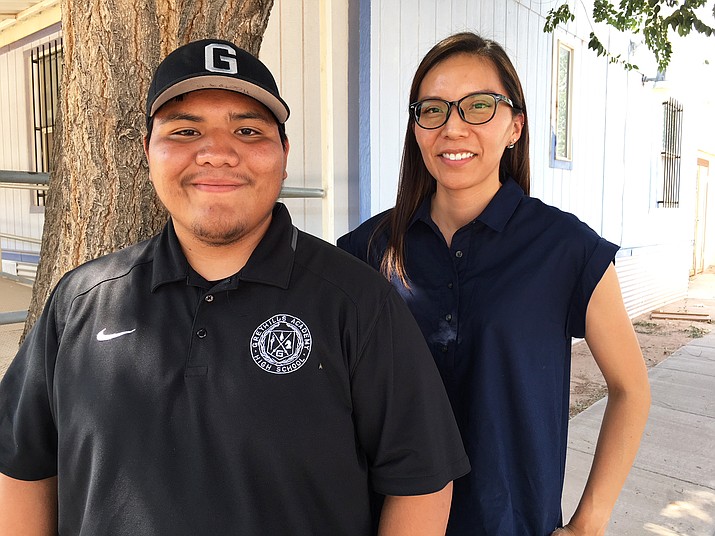 Joaquin Kootswatewa graduated from Greyhills Academy High School in Tuba City and is studying astronomy and aeronautics at Utah State University this fall. He is pictured here with Jessica Jones Aug. 2. (Submitted photo)

TUBA CITY, Ariz. — When he gazes up into the clear starry nights outside his home in Tuba City, Joaquin Kootswatewa feels inspired.

“As a kid growing up everywhere, the only thing that stays the same is the sky,” the 18-year-old says. “You go out, you have a nice breeze, that colorful sky with different glowing colors. Fascinating.”

Joaquin is following his passion for the skies by studying astronomy and aeronautics at Utah State University this fall. A few months ago, he graduated from Greyhills Academy High School in Tuba City, a school which is hosting a grant project funded by the Arizona Developmental Disabilities Planning Council.

A self-advocacy class for a select group of Greyhills students launched during the 2017-2018 school year and continues for a second year thanks to facilitators from the Farmington, NM-based Native American Disability Law Center (NADLC).

“Greyhills is very fun, the teachers are understanding, it’s creative, the food there is tremendously delicious, it’s like fresh-cooked every day,” Joaquin shared.

The boarding school hosts students from all over the region: Kayenta, Kaibab, Phoenix, Utah. Joaquin lives in the dormitory during the week and visits family on the weekends.

“Some of the (teachers) are strict, but I prefer it that way, to keep the rules enforced,” Joaquin said. 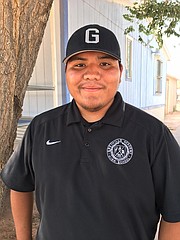 Joaquin Kootswatewa graduated from Greyhills Academy this year and is attending Utah State University where he is studying astronomy and aeronautics. (Submitted photo)

That structure also appears in Joaquin’s Individualized Education Program, better known as an IEP. For a while, he didn’t feel equipped for the IEP meetings that take place three times a year with his teachers, grandmother and father.

“All I know is that I go in there, I sit down and I listen to the adults talk and they start saying stuff like okay, we need to do this and that, and sometimes I don’t feel like I have a word,” Joaquin explains.

Enter Jessica Jones, a staff advocate from the NADLC. To say she’s dedicated is an understatement — Jessica drives more than three hours each way from Farmington to teach the Greyhills class in Tuba City on the opposite side of Navajo Nation.

With a class of about eight, she shares tips on how to speak up for each student’s needs and wants, and how to ask for accommodations like extended time to take tests.

For Joaquin, the group activities quickly became his favorite part about the class. Jessica adds that the activities were a hit with the rest of the students, too.

“Instead of teaching them and telling them what a word is, it’s more showing them, role playing, watch and learn,” she explains.

Teaching communication skills was another important aim. And as this second year of the project unfolds, she’s looking forward to continuing to build upon the lessons.

Joaquin says the class helped teach him how to apply those skills in IEP meetings.

“I tend to speak up for myself, but sometimes I just get shy,”

“When Miss Jessica Jones came to the class and talked about it, I learned a lot,” he said. “They told me that I can put a few rules in. I can mention some things that do help me focus and some that don’t.”

Most importantly, he feels more confident.

“I felt free,” he said. “I felt like it’s a big step towards understanding others, and in the classroom, as well.”

The main goal is to prepare students for a smoother transition to adulthood, Jessica says.

“We try to focus on employment, post-secondary, getting them ready for those transition services that are available to them. We try to get a lot of those scenarios in and kind of getting them a little bit more hands on situations.”

One impactful addition last semester came in the form of class presentations.

“For me personally, I didn’t get that, even in high school,” Jessica explains. “You don’t get a lot of that public speaking experience. If you are able to get that experience now and get that confidence to talk to other students or even getting in front of a larger crowd to present any kind of information you may have, that was kind of a big thing we tried to incorporate a little bit more this past semester.”

For his class presentation, Joaquin chose his favorite topic: NASA. It’s his ultimate dream to become an astronaut. Working with mission control would be another goal. He’s also interested in computer programming, graphic design or gaming.

The day of his first IEP meeting to try out his newfound skills, Joaquin felt anxious.

“I honestly felt very nervous because it was my first time speaking with the adults at the big table,” he said. “Growing up, you’re taught to sit in the side just listening.”

Part of the success of the class comes from Jessica’s own experience and how she can relate to the students. She grew up in Farmington, about 20 miles east of the Navajo Nation boundary in New Mexico. She holds a masters degree in American Indian Studies, which comes in handy as she adjusts lesson plans to the students’ environment.

“It’s also important to create curriculum that matches with the local community’s needs,” she says. “Adapting the lesson plans to fit her Tuba City students’ daily lives is important for their participation.”

“We did have a curriculum that was developed, but we had to play around with it so it would be accommodating to Native students and be more realistic of what resources are available on the reservation versus what is off the reservation. Joaquin is going off to Utah, so getting prepared for those types of situations and giving them the confidence they can still get resources off the reservation and however they want to get their career paths developed.”

Other students in the class had various reactions to the introduction of self-advocacy into their lives.

At the beginning, “not a lot of people knew what that word meant,” Jessica said. “I think it was sort of eye-opening when we did the scenarios, because it was like, oh ok, I get what you are getting at, but I think its also the process of getting that information and trying to do that in a way that’s very simplified and very visual and a little bit more tangible that they can refer back to.”

Joaquin reflected back on those first few sessions.

“In the beginning, the students were kind of shy when they were asked questions. She would ask a question and sometimes the students were quiet….as time went by, I think the reaction became a bit interested because of the activities,” he said.

He plans on applying his blossoming self-advocacy skills throughout his college journey.

“At Utah State, I will apply it by consulting the instructors,” he said.

But students like Joaquin have earned new skills that will have powerful impact far outside the classroom —even helping younger generations speak up for their wants and needs.

“We would go to McDonald’s one day and sometimes my grandmother will order for my younger siblings,” he said. “I kind of consulted her about it, asking her, I wonder if the kids have their own word. This is the point where they should learn how to make their own decisions, not important or serious, but just common decisions.”

Now, a proud graduate of the self-advocacy program and Greyhills Academy High School, Joaquin still struggles to raise his voice at home or in large groups of people at times.

“I tend to speak up for myself, but sometimes I just get shy,” he said.

But the teen is confident the tools he learned have helped him speak up more.

Joaquin’s advice to other students:

“Ask questions about your IEP, like what’s beneficial to you?” he said. “When you go to your IEP meeting, make sure everybody knows you’re comfortable in the classroom. If you are kind of a slow learner, you can ask them to slow down the class or get an extension on your homework, assignments or tests, and be very observant.”