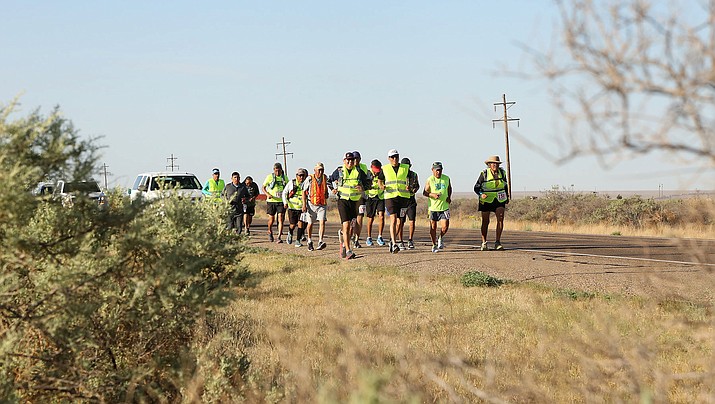 Running for Resilience reaches the Stage 1 Day 1 destination of Santa Rosa, N.M. The runners ran 45 miles on Day One. (Navajo Nation Office of the President and Vice President)

FORT SUMNER, N.M. — Vice President Jonathan Nez ran to support Navajo resiliency and wellness as he joined a group of runners who are making the trek from Fort Sumner, New Mexico to Window Rock, Arizona.

On the morning of May 14, a group of approximately 30 runners and support staff started the historic journey back to Dinetah. Along the way, runners traveled many of the same routes that their ancestors had taken.

“We’re here in remembrance of our ancestors and the hardships they overcame to return home within the four sacred mountains,” Nez said. “This is a journey of prayer and healing. We’re running for those who can’t run themselves and for those who need help in battling hopelessness or despair.”

Running for Resilience, as it’s known, commemorates 150 years since Navajo leaders signed the Treaty of 1868, ensuring the Navajos freedom and release from Fort Sumner. The run will end in coordination with the unveiling of the original Treaty of 1868 as it visits the Navajo Nation Museum June 1.

Running for Resilience is part of the 8th annual Running for a Stronger and Healthier Navajo Nation project sponsored and organized by the Navajo Special Diabetes Project and the Office of the President and Vice President.

Before starting Day 1 of Stage 1, the runners gathered in prayer at the Fort Sumner Community House and listened to words of encouragement from Louie Gallegos, mayor of the Village of Fort Sumner.

“We are encouraged by the focus of healing, health and wellness,” Mayor Gallegos said. “Diabetes is a disease that is hitting every culture. I, myself, am diabetic. I feel this run provides a positive direction in health that will benefit the Navajo Nation.”

The mayor said he’s learning more about what happened and how the Navajos’ internment at Fort Sumner has impacted their livelihoods.

“There is a lot of healing to be done and this is a time of healing,” he said.

“We are building a permanent exhibit at the Bosque Redondo Memorial that talks about the resilience and strength of the Navajo people and the aftermath of the Long Walk,” she said

The first day of the run covered a 45-mile stretch between Fort Sumner and Santa Rosa, New Mexico.

“Today, the runners are pushing their bodies’ endurance to keep moving forward. It makes you think about what our ancestors went through to return home,” Nez said. “I’m proud of all the runners who participated today.”

The New Mexico State Police and both the La Baca County and the Guadalupe County sheriff’s departments escorted the runners as they traveled north along U.S. Route 84.

In total, Stage 1 covered approximately 130 miles and stopped in the cities of Santa Rosa and Dilia, New Mexico.

“Today, we drew upon the strength of our ancestors to make this journey from a place of historical darkness for our people,” Nez said. “But today, we are reclaiming this story for our youth to let them know that as Navajo people, we were never defeated.”

Running for Resilience organizers would like to thank the Navajo Department of Transportation, the Navajo Special Diabetes Project and all the law enforcement for securing the runners’ path and providing critical support and resources.

In Stage 2, runners will dedicate the days as follows: Day 1 to language and culture preservation; Day 2 to teachers and graduates; Day 3 to health and wellness; and Day 4 to the public safety workers.