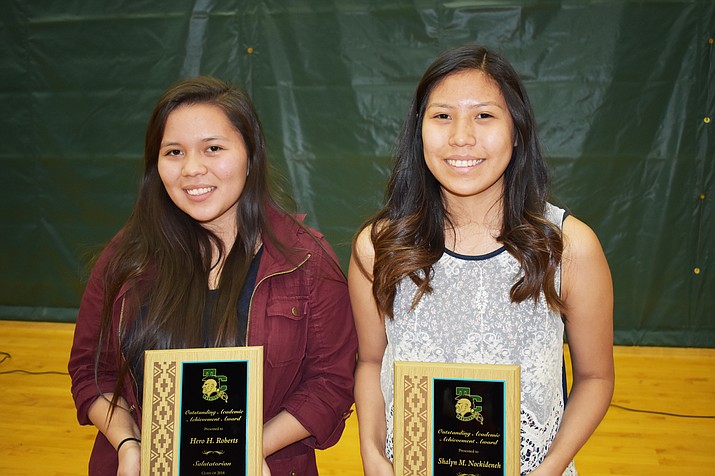 Tuba City HIgh School 2018 salutatorian Hero H. Roberts (left) and valedictorian Shalyn Nockideneh. Both young women had the highest GPA for the graduating class at Tuba City High and both are interested in pursuing a degree in medicine after graduation. (Rosanda Suetopka Thayer/NHO)

By Rosanda Suetopka Thayer, for the Navajo-Hopi Observer
Originally Published: May 22, 2018 11:33 a.m.
Tweet

TUBA CITY, Ariz. —Tuba City High School (TCHS) is a rich melting pot of ethnic cultures that includes varied tribal and non-tribal members who support, show encouragement and loyalty to one another at both the student and staff level.

This helps to build students confidence, as well as understanding and appreciation for all cultures while working to succeed at their rigorous high school academic program.

This year at Tuba City High, the two top highest GPA finalists are Shalyn Nockideneh, 18, who has been named as 2018 Valedictorian. Fellow classmate, Hero H. Roberts, 18, was named salutatorian.

Nockideneh, a full- blooded member of the Navajo Nation, is the daughter of Sandra and Larry Nockideneh and has attended TCHS since her freshman year.

Nockideneh has already been accepted to Northern Arizona University and plans to go directly into the medical field, hoping to come away with a degree in either the general physician field or a more specialized area of sports medicine.

During her high school years at TCHS, Nockideneh has been extremely active in all honors classes, AP classroom activity and was accepted to NAU Talent Search and University presentation format classes.

Nockideneh credits her mother, Sandra, with the largest part of her inspiration for college and medical interest and also gives much credit to all of her TCHS teachers who supported her, challenged her interests and demanded academic discipline to get her this far.

Nockideneh is not the first in her family to go to college and she hopes to lean on some of her immediate family and relatives to help guide her and let her know where she can get extra help if she needs it.

She also credits both of her parents for showing her life guidance and career advice in choosing an appropriate university for her medical interests. She also wanted to thank her grandparents, Lena and Freddy Secody for providing her with caring family support and all of her TCHS teachers who pushed her to her strongest areas and helped her work on her weak areas to improve.

Hero H. Roberts, 18, is the daughter of Alberta and Benton Henry.

Roberts says she moved a lot when she was young and attended all kinds of schools before she was able to really settle down into high school at Tuba City High in her freshman year.

Roberts has been accepted at the University of Arizona in Tucson and will study to become a cardiothoracic surgeon.

Roberts says TCHS gave her a solid base of education support and that she feels prepared to go on to college with the study skills she was able to learn and benefit from at Tuba City High.

Roberts says, “I want to thank these teachers for giving me the inspiration to move on, DeJesus, Torres, Macaraig, Rounds, Aquino, Rojos and Sam. I’m not the first in my family to go to college but I do want to stand out by doing well and being serious about what I’m going to college for. I thank all of these teachers for helping me prepare for a more serious part of my life.”

Commencement for Tuba City High School will be held May 26 at 10 a.m. DST at the TCHS Warrior Pavilion.