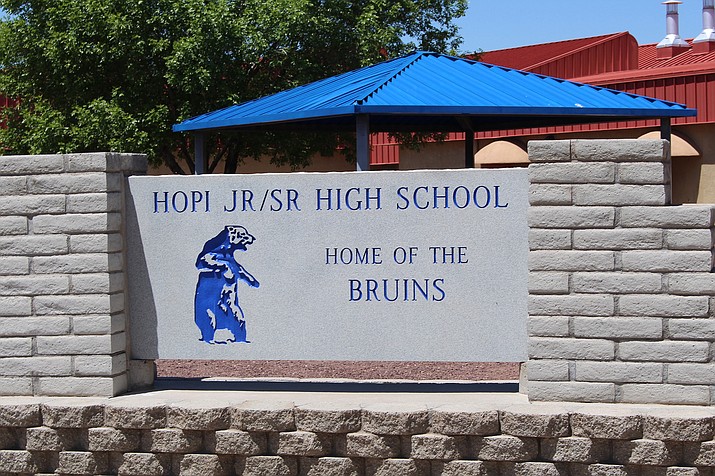 Around 40 teachers, staff and community members attended a Hopi Board of Education meeting at Hopi Jr/Sr High. The Hopi Board of Education, which recently replaced the Hopi Jr/Sr High School Governing Board, agreed to take no further action on contract decisions for the next school year. Around 12 employees who previously did not have their contracts renewed will not be able to return to the school. Additionally, around six teachers have chosen not to return next year to teach at the school. (Stan Bindell/NHO)

POLACCA, Ariz. – The Hopi Board of Education (HBE), which recently replaced the Hopi Jr/Sr High School (HJSHS) Governing Board, agreed to take no further action on contract decisions for next school year. This means that teachers and staff who were offered contracts for next school year can return if they want to do so. It also means the 12 employees including four administrators, four regular education teachers and three special education teachers who did not have their contracts renewed will not be able to return.

HBE Vice President Judy Talawaima said this is a done deal because “we don’t know the facts.”

HBE Board member Melvin Pooyouma said he felt the HJSHS Governing Board made the right decisions. He said it would be a tedious and a long process to change it.

“I’m uncomfortable as it is, so let’s move on,” Talawaima said.

Dale Wilson, a special education teacher whose contract was not renewed, yelled at the board: “You don’t know how to replace 18 teachers. This was a bad decision.”

Wilson was not referring to only the teachers who were non-renewed, but teachers who chose not to come back next year because of the turmoil at the school. Approximately 40 teachers, staff and community members attended the meeting. Many left immediately following the decision.

During the call to the public, Wilson also spoke against the contract decisions by HJSHS Governing Board, but many speakers spoke in favor of the decision by the Governing Board. Wilson said he was concerned that HJSHS did not have a proper system for evaluations. He said people in middle management, who were not properly trained, were making evaluations.

“I was doing two teachers jobs and I was told I was doing a good job,” he said. “It’s not fair. It’s not right.”

Theressa Silas, a parent and teacher aide at HJSHS, spoke about the qualifications that are needed in order to become school board members.

Angie Joseph, a parent, said she was concerned about whether seniors would graduate on time. She also questioned whether HJSHS had proper methods for evaluating teachers.

“What will happen next year? Will we have enough teachers?” she asked. “Some teachers were teaching two subjects this year. I don’t want to fail our students. I know you will look at the best interests of the students.”

George Silas told the board they should reschedule because they were coming in blind to the situation.

“Some of you just got your packets. There are a number of important items. You may want to have a special meeting to familiarize yourself with the policies,” he said.

Farron “Gato” Lomakema, who teaches the alternative program at HJSHS, said he was concerned about how this issue evolved.

Lomakema said a lot of teachers are now considering leaving.

“This is like saying ‘you’re nothing,’ “he said. “This could have been handled in a more timely manner.”

Lomakema said he was also concerned about the lack of discipline at HJSHS this year as nothing was done to curb tardies and there were students who didn’t show teachers any respect. He said the discipline for students caught smoking wasn’t enough.

“Some of the students would laugh at security and talk back to the teachers,” he said. “I’m not here to be their friend. Some cuss me out, but that doesn’t bother me because I’m doing my job. We should not let the kids control the school because I feel that’s what’s happening now…A small percent is doing this, but it puts a bad name on the rest of us.”

Lomakema also criticized the tribe for not doing anything about social issues such as drugs and alcohol.

“It was like our votes meant nothing,” she said.

Sekayumptewa questioned how this will impact the school’s accreditation.

“We have good teachers here. It’s hard to get them here. You need to be trained. You’re not trained,” she told the HBE members about their school board governing duties.

Sekayumptewa questioned whether the Hopi Tribal Council had the right to remove the HJSHS Governing Board.

David Talayumptewa, chairman of the Hopi Tribal Council’s Health and Education Committee, said they had to review academic achievement, governance and curriculum at HJSHS.

HJSHS Dean of Students Charlene Youvella, one of the administrators who did not have her contract renewed, said teachers at HJSHS have problems with classroom management.

“It’s good to have constructive criticism, but we all have a responsibility, not just one individual,” she said.

Madonna Dawasevama said a work session is needed and she always offers solutions. She said it was time to go forward.

“Hopi High School is still a great place to learn,” she said.

Laverne Lomakema, a math teacher at Hopi High, said she was confused how it got to this point because at no time were teachers asked for their input. She said nobody knows what goes on except for the teachers and students. She said the issues for the past several weeks have distracted the students.

“It’s not fair to have this without the teachers input,” she said. “When will we be heard and have our voice out?”

President Dawasevama thanked the public for their concerns.

Steven Berbeco, superintendent of HJSHS, started the meeting by saying he was in a unique positon of being a superintendent without a board. That soon changed as the HBE members were sworn in and then elected officers among themselves.

President Dawasevama said HBE has a lot of work to do. He noted that the board represents several other schools.

“Most of us will do our best for our kids,” he said. “Obviously you care about the kids.”

Board member Uberta Mowa said the issues are bigger here than they are used to dealing with at the elementary schools.