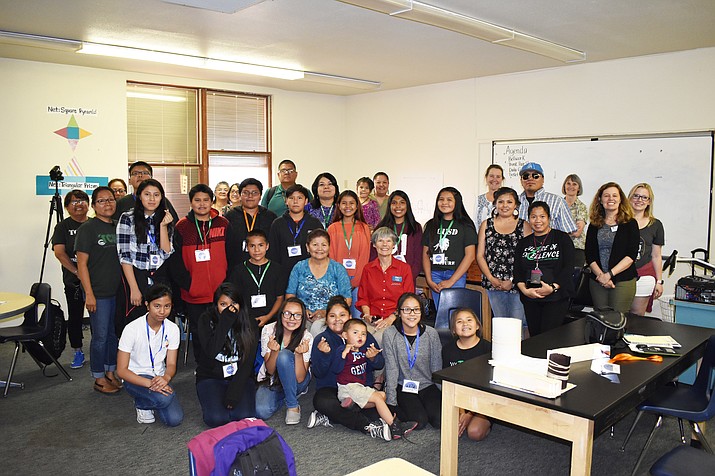 Parents, teachers, a governing board member and a special visitor from the Arizona School Board Association attended the final presentations. The program was funded by NASA and was considered an overwhelming success.

Dr. Melissa Bilagody, principal of Tuba City Junior High, was very pleased to have the after-school program in her facility because it enhanced students’ research skills while promoting student interest in both engineering and science fields.

Engineering and planetary science are two career fields which are currently underserved in most Native communities. Bilagody is hoping to make the fields more accessible and enticing to the junior high school students.

The program s designed to raise interest and awareness for the students, which, in turn could translate into career paths in the future.

The after school Planets program uses teaching methods that integrate planetary science, technology and engineering to research and solve problems in remote areas, like other planets or moons that cannot be visited as easily in person.

The program at Tuba City worked on a mock problem of “how and where was the safest place to land a Moon Rover” in their classroom assignment.


The students used paper, drinking straws and coffee stir sticks to help understand the varied surfaces of the moon and what obstacles they might encounter when trying to land their Rover.

A big part of the NASA Planets program is to increase youth interest and engagement in science and engineering fields and to support student interest and understanding about science and its practical application in everyday life.

The program was held after school, so students and families had to schedule time to devote to the success of the program.

Tuba City Junior High had a large amount of students who wanted to participate even though it meant time away from play or sport activities that are not associated with their regular school day.

Tuba City Junior students learned how to collect and investigate data and learned how to present their data to an outside audience in a 30-minute taped format and also how to document their journals and technology which is considered part of their educational artifacts.

A special guest visitor to the Tuba City Junior PLANETS final presentation May 10 was Dee Puff, from the Arizona School Board Association, along with Tuba City Unified School District board member Mary Worker.

Parents and fellow teachers were also in the audience for the students’ presentation.