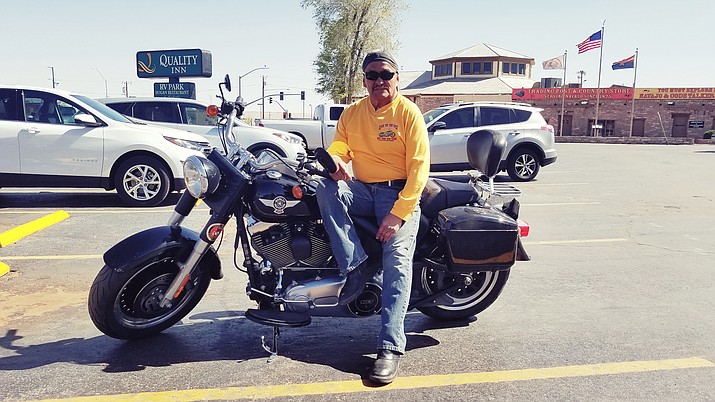 Terry Lewis has been with the Navajo-Hopi Honor Riders for four years. He said being an honor rider is like being in a brotherhood. (Photo/Geri Hongeva-Camarillo)

A quiet, humble, Navajo veteran shares a glimpse of his life with me, shortly after finishing up with a Navajo Hopi Honor Riders (NHHR) meeting at the Hogan Restaurant, next to the old trading post in Tuba City.

WINDOW ROCK, Ariz. — I have seen Terry Lewis at many rides throughout the year and the year before, this time, I had more time to sit and talk awhile with him. My father would have been his age, he was a Vietnam veteran, too. Lewis is very humble and respectful person, he is a very intellectual person and likes to help where he can, in many ways he reminds me of my father.

In October 1952, Lewis was born at the old hospital in Tuba City, which is no longer there. He went to Tuba City Boarding School and graduated from Flagstaff High School. It turns out that Lewis was at the Flagstaff dormitory with my uncle Thomas McCabe. After graduation in 1972, he joined the United States Marine Corps and progressed through the ranks, achieving the rank of staff sergeant for 13 years. As a Vietnam-era veteran, no war zone experience, he focused on his skills as an electrician.

As a child, Lewis grew up near Shadow Mountain, near the Little Colorado River Gorge. He learned how to herd sheep at a very young age and like many Navajo children his age, Navajo was his first language until he began boarding school.

It was fairly easy for Lewis to get a job immediately out of the military. He learned the electrical trade and received his license in California. He has worked in the commercial and industrial field and has supervised many individuals throughout his career as an electrician.

Lewis relocated to Sanders, Arizona in 1999 and continues to live there. He has two children, a son and a daughter and two grandchildren. His wife of more than 38 years, likes to ride short distances with him. She is originally from Oklahoma from the Cherokee tribe.

I asked him about being an honor rider for NHHR, he replied, “It’s like a brotherhood for me. It also represents riding for those who cannot, but mostly, just riding in a group is different than when you’re riding alone.”

Lewis has been riding with Navajo Hopi Honor Riders about four years now. If he can, he will occasionally ride with the Nations of Patriots also a motorcycle group.

He recalls his first motorcycle in 1972, it was a Harley Davidson Sportster chopper, then he swapped it for a 2004 Sportster. Currently, he rides a 2013 Harley Fatboy. He has journeyed on his motorcycle to Washington D.C. twice for the Run for the Wall event, and is currently planning to ride this year for the third time.

What asked what made him decide join the military, Lewis answered, “It’s a calling, something I needed to do at the time and I wanted to experience life off the reservation. My father was in the Red Cross and he traveled all over the world.”

Lewis was also a professional bull rider in his younger days. He is also trained in Tae Kwon Do and Hap Ki Do, both are Korean style martial arts. He is very passionate about playing golf and finds every chance he can to play. Motorcycle riding is big part of his life as well as being with his family.

May 17 marks the beginning of the 16th annual Navajo Hopi Honor Run. Lewis will be one of many riders who be riding to honor all fallen warriors and remembering our military families throughout Native American communities.

The board members of Navajo Hopi Honor Riders have been planning the four-day ride by having public meetings with riders and collaborating ideas. Safety for all the riders is the top concern for a motorcycle run of this capacity.

This year, the route will begin from St. Michael’s, going into Beshbitoh, Keams Canyon, Kykotsmovi, Birdsprings, Leupp and ending day one in Flagstaff, Arizona. Day two will begin in Flagstaff, proceeding into Tuba City, Bodaway Gap, Page and ending in Kayenta. Day three starts from Kayenta, heading into Bluff, Belcabito, and resting for the night at Towaoc, Colorado. Day four begins from Towaoc to Northern Edge Casino in Farmington, Crownpoint, Pinedale and concluding at Window Rock Veteran’s Memorial Park with a Round-Up reception.

The Navajo Hopi Honor Run first began in 2003 when the first Native American female, U.S. Army Spec. Lori Piestewa was killed in combat. The annual run has brought healing and comfort to many Gold Star and Blue Star families. Our warriors will never be forgotten. For many riders who are veterans, riding is therapeutic and being with their biker family, gives them strength and comfort.

Additionally, the month of May is officially Motorcycle Safety Awareness Month. Drivers, please look twice as motorcycles are harder to detect and check blind spots frequently. Riders need to also wear protective gear and be diligent in making sure your motorcycle is well maintained and being aware of your surroundings.

More information on the 16th annual Navajo Hopi Honor Run from May 17 – 20 is available at www.NavajoHopiHonorRiders.com.