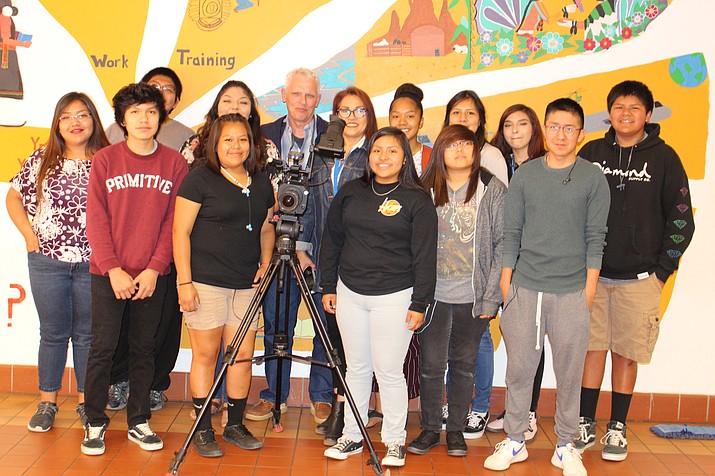 “The leading characters should be teenagers because those are the most intriguing years,” Carlsen said.

He said teenagers are left with making big decisions about how they will use their freedoms.

Carlsen wanted to make the first episode in the series in America because he said the U.S. is the symbol of freedom, especially when it comes to their first inhabitants. He also has ties to the states, as his relatives lived in California and he fell in love with America’s landscapes. He said his homeland in Scandinavia is small and densely populated.

“Here you have an enormous expanse of land and it felt liberating,” he said.

Carlsen said his goal is to recreate fragments of life in America. He said silence plays a big role in his documentaries, such as watching a lady at a farmhouse looking out her window to see what she is thinking.

“It’s a playful discipline with self-exploration,” he said. “We don’t interact with people; we just follow them.”

Carlsen said films need the right protagonist to show how they use freedom. He said teenagers are in that situation.

“You (teenagers) may not think about it as freedom, but what you do with this life has an impact on your freedom,” he said.

Carlsen said the obstacle to making films is always money, but his films or documentaries are funded by the Danish Film Institute, Danish Broadcasting and Swedish Broadcasting. He said the staff and students at Hopi High were enormously hospitable.

Myers, who has been in the film industry for 12 years, is serving as the production manager for this project. She has worked with independent and larger film companies.

Myers said there haven’t been many Native Americans involved in filmmaking.

Myers, who is Comanche and Blackfeet, hails from Oklahoma. She started on this media journey when she took journalism in high school.

“This will be the first time they did a living Native American, so it’s astounding,” she said.

So Myers figures she’s making history and likes to tell students they should do the same. She is also proud that 90 percent of her crew working on the Momaday episode is Native American.

“What you bring is amazing,” she told the students. “You have your language, your culture and your stories. The stories your family and grandparents gave you.”

Her advice to Native American journalism students is to make history by highlighting their culture and themselves. She said mainstream America doesn’t have an opinion on Native Americans because they don’t know them.

“So bring out a story that happened here,” she said. “Being Native American is your super power.”