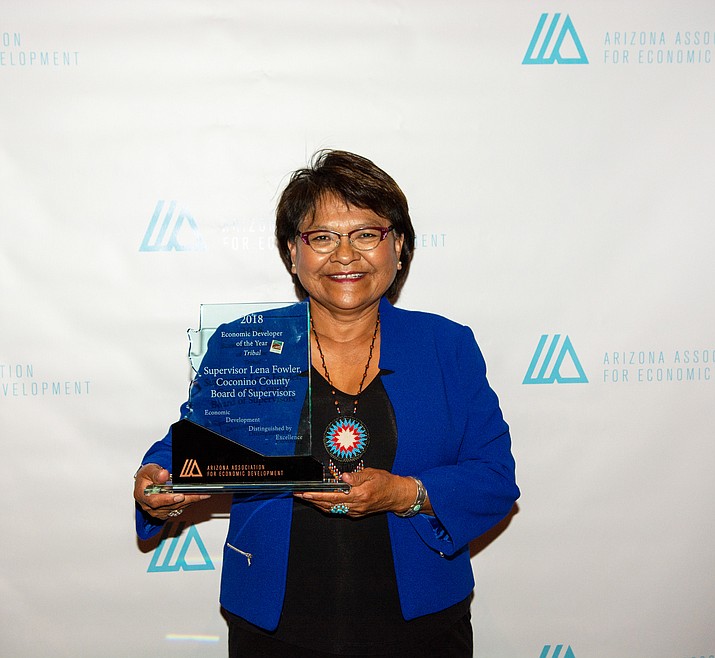 She was recognized as the organization’s Economic Developer of the Year, Tribal Community.

Fowler is currently serving her third term as Coconino County Supervisor for District 5, which covers much of the northern part of the county.

The prestigious EDDE Awards honor individuals and organizations that have made significant contributions to the advancement of the organization and also to the economic growth within the state of Arizona.  Recipients are selected from a pool of nominations made by members of AAED.

Joyce Grossman, AAED’s executive director, said Fowler was honored for her profound impact on policies and initiatives to benefit the economic development of the diverse communities of northern Arizona.

Among the recent achievements of Fowler and her team are moving forward on a plan to bring broadband to the region and securing a number of grants, including:

• $300,000 POWER grant from the federal Economic Development Administration to be used to help the county train workers.

• $154,000 to the Navajo Nation to prepare a commercial plan to mitigate effects of the closure of the Navajo Generating Station.

• $128,000 to the Hopi Tribe Economic Development Corp. to support the development of a business economic incubator.

• $104,000 to Navajo County to support preparation of an economic assessment and recovery strategy.

• $137,000 to the Hopi Tribe to support an economic diversification strategy.

• $100,000 to Arizona State University to develop a plan to transition from coal to renewable energy.

Overall, 10 EDDEs were presented during an evening awards dinner at the AAED Spring Conference in Oro Valley.  The other winners are:

Jaye O’Donnell, assistant economic development director for the city of Mesa, Member of the Year.

Ben Hooper, economic development coordinator for the town of Prescott Valley, New Member of the Year.

“The winners of the EDDE Awards truly represent the best and brightest economic development practitioners and organizations in Arizona,” Grossman said.  “Their contributions throughout the state demonstrate not only a commitment to the communities they serve, but to the economic vitality across Arizona.”