May 14 run to highlight Navajo resilience 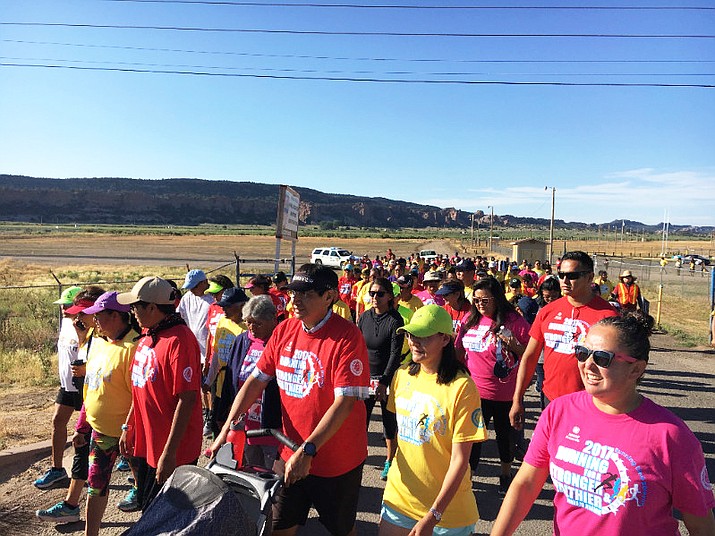 WINDOW ROCK— On May 14, Vice President Jonathan Nez will begin a 400-mile run from Fort Sumner, New Mexico, to Window Rock, in commemoration of the 150th anniversary of the Treaty of 1868 and the Diné people’s return to their homelands.

The run will begin with prayers and ceremonies in the village of Fort Sumner (not the Bosque Redondo Memorial) and use parts of the route the Diné took a century and a half ago after being released from imprisonment. Vice President Nez plans to complete the journey in three stages, running an average of 30 miles per day over a 19-day period, with rest days scheduled between stages.

The run is designed to be respectful and honor the resilience of the people, while also solemnly commemorating the end of the darkest time in Navajo history, Vice President Nez said. Since the Diné returned to the land between their four sacred mountains, they have grown in strength and numbers — now recognized as one of the strongest native nations in the country, with the largest land base.

“We are not re-enacting, but remembering,” Nez said. “We are showing our resilience as Navajo people and remembering our ancestors who were thinking about us as they persevered and negotiated the treaty. As they signed their X’s on the treaty, they were fighting for a continuation of our way of life.”

After signing the Treaty of 1868 and claiming their freedom, Navajo elders advised the people not to dwell on the hardships they faced. That counsel has prevented some Navajos from visiting the Bosque Redondo site, now a state memorial.

Yet Hwéeldi (the Navajo word for the Long Walk and imprisonment) should be viewed as a source of strength, according to Nez. Leaders in 1868 relied on protective prayers and ceremonies to guide them through the treaty negotiation and convince the federal government to recognize Navajo sovereignty.

“This is where we draw our strength,” Nez said. “It is a source of power and resilience, where our medicine men made strong prayers and faced their captors with courage. If we need an example of resilience, it’s right there.”

Nez visited Bosque Redondo in March and a hatałii performed a protection ceremony to restore harmony and allow individuals to visit the memorial in peace. He hopes his run serves as an educational tool for the general public and the young generations of Diné.

Since the vice president’s tour of Bosque Redondo, the site has seen a spike in Navajo visitation, according to Aaron Roth, facilities manager at the memorial. Visitors — especially Navajo youth — are anxious to know their own history, he said.

The spotlight on the treaty also has sparked discussions across the Navajo Nation. Since all three branch chiefs came together in February to sign a proclamation declaring 2018 the Year of the Treaty, young people are turning to elders for stories.

“We are at a point in world history when people are speaking up,” said Peterson Zah, ambassador for the Navajo Nation. “Not talking about our past or not thinking about it, that’s not good. If we don’t talk about it, if we hide our history and who we are, we’re doing a disservice to the Navajo people—and to the rest of the world. The more we talk about it, the more we can prevent this from happening again.”

The planned run is not the first such event to commemorate the Long Walk and the Treaty of 1868. The Navajo Council in 1968 appropriated $180,000 for a Long Walk re-enactment — for the 100th anniversary of the treaty —during which people traveled to Bosque Redondo and walked portions of the route home.

In 1994, Navajo leaders again returned to Bosque Redondo to dedicate the historic site. According to data collected at the site, thousands of Navajo visitors every year travel to Bosque Redondo, where a museum tells the story of the Long Walk and the incarceration of Navajo and Mescalero Apache in the 1860s.

Coordinated in conjunction with the Navajo Nation Department of Health and the Special Diabetes Project, the run from Fort Sumner takes the place of the annual relay run throughout the Navajo Nation. Now in its eighth year, the annual Running for a Stronger and Healthier Navajo Nation event is expected to attract athletes from across the Southwest and beyond.

Runners will follow segments of the route, as identified by the National Park Service in a feasibility study completed in 2009, which included historic research and public meetings on the Navajo and Mescalero Apache reservations. That study can be found here.

The route includes dirt roads, city blocks, county and state roads and major thoroughfares like sections of I-25 and I-40. It passes through small towns, cities like Santa Fe and Albuquerque, and some of the pueblos.

The Navajo Nation is working with the New Mexico and Arizona departments of transportation and various public safety departments to secure road or lane closures and police escorts, where necessary. Runners are invited to join the group at any time, and to participate in morning and evening events like prayers, ceremonies and storytelling and other educational and wellness activities.

“Navajo academics and elders say our language and way of life teachings are declining,” Nez said. “This run will help us revitalize our teachings. It’s also a way to focus on health and wellness. Our teachings tell us to get up early in the morning and run. By doing this, we are showing our people that we care about them, we love them and we want them to be healthy.”

Organizers also are planning strategic stops along the way, like the point outside of Albuquerque where the original caravan first caught sight of Mount Taylor. The group also anticipates educational stops in Santa Fe, Albuquerque and Gallup, as well as Navajo chapters and pueblos along the route.

The run, scheduled to end at the Navajo Nation Museum in Window Rock on the morning of June 1, coincides with other events commemorating the 150th anniversary of the treaty. The original treaty, on loan from the National Archives and Records Administration, will be on display at the museum for the month of June.

Diné from across the reservation — coming by foot, horseback or vehicle — are expected to convene in Window Rock on June 1. The museum will be open every evening in June to allow people to gather and share personal or family stories.

Event organizers recognize that some families’ ancestors, especially from the Western Agency, did not go on the Long Walk, choosing instead to hide in the mountains or canyons. Plans are under way for those chapters to host similar commemorative events.

Navajo Nation President Russell Begaye encourages everyone to find a way to honor the resilience and strength of the Navajo people and to view the original treaty when it is on display.